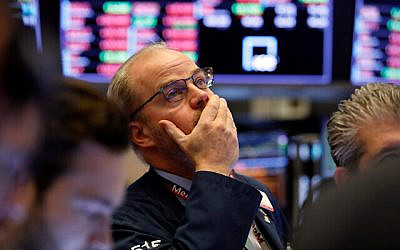 Illustration: Trader David O’Day works on the floor of the New York Stock Exchange as equities plummet due to the coronavirus outbreak, Feb. 28, 2020. (AP/Richard Drew)

“Wise observers have long understood that the appearance of justice is as important as its reality” (Antonin Scalia, justice at the Supreme Court of the United States).

An open secret among rabbis and educators is the fear of Parshat Vayakhel. “What should I talk about?” is the worry. The Parsha is short, repeats much of what is discussed before, and is filled with numbers summarizing the construction of the Mishkan. And yet, in its repetition, lays it’s greatness as it imparts to us one of the greatest lessons for corporate life, charity, and our personal lives.

“These are the numbers of the Mishkan, the Mishkan of the Testimony, which were counted at Moses’ command; [this was] the work of the Levites under the direction of Ithamar, the son of Aaron the Kohen. Bezalel, son of Uri, son of Hur, of the tribe of Judah, had made all that the Lord had commanded Moses. With him was Oholiab, son of Ahisamach, of the tribe of Dan, a craftsman and master weaver, and an embroiderer in blue, purple, and crimson wool and in linen.” (Shemot chapter 38)

After naming all those in charge of the construction of the Mishkan, Moses goes on to outline exactly how much gold he has received, how much silver, and on to every single donation he received; he specifies what he got, and what was done with it.

“All the gold that had been used for the work in all the work of the Holy the gold of the waving was twenty-nine talents, seven hundred and thirty shekels, according to the holy shekel…”

The numbers and details keep coming, despite having been written before when talking about the construction of the Mishkan. Why?

Why does the Torah, which is so often sparing with words it uses outline what almost looks like an accountant’s Excel spreadsheet at the end of the Mishkan story, sparing no details? Why do we need all this? Furthermore, why don’t we trust Moses? Why should the man who carried the word of God to the entire people, who have thereby entrusted their faith and lives in his hand, not be trusted with a few dollars? Who needs all the accounting?

The answer can be found in a fascinating story that took place in Jerusalem during the time of the Second Temple. The Talmud (Yoma, 38a) shares:

“The craftsmen of the House of Garmu were expert in the preparation of the shewbread [lechem hapanim, placed inside the Beit Hamikdash] Never was refined bread of fine flour found in the hands of their descendants, so that people would not say that they are sustained from that technique of preparing the shewbread. They ate only bread made of coarse flour mixed with bran, to fulfill that which is stated: “And you shall be clear before the Lord and before Israel” (Bamidbar 32:22). Not only must one’s behavior be beyond reproach, he should also make certain to be beyond suspicion. “

Even if one is being perfectly honest, one must also make sure their actions cannot be interpreted in a negative way. To steer clear of suspicion of any conflict of interest, they avoided making any kind of bread that might resemble the bread they crafted for the Temple.

The Talmud (ibid.) shares the story of another family with a striking similarity.

“The members of the House of Avtinas were expert in the technique of preparing the incense…Never did a perfumed bride emerge from their homes. And when they marry a woman from a different place, they stipulate with her that she will not perfume herself, so that cynics would not say that it is with the work of the incense that they perfume themselves, to fulfill that which is stated: “And you shall be clear before the Lord and before Israel” (Numbers 32:22).”

The Avtinas family was blessed with the same wise outlook: avoid even the appearance of a conflict of interest. “Come clear before Hashem, and before Israel”.

While the details of Moses’s “excel spreadsheet” may feel tedious, they send a glorious and powerful message: transparency and accountability. All to often, we have seen companies, institutions, and even entire economies collapse due to poor standards of transparency and the normalization of dishonest conduct. Integrity does not begin with the absence of impropriety; it starts with the absence of behavior that can even be seen as such.

As law professor, Leslie Abramson put it:” without the appearance as well as the fact of justice, respect for the law vanishes in a democracy”. When the Torah tells us exactly what went where it is making the case for transparency, teaching us for generations that for healthy religious and public institutions to exist, we must open the books and let people know what their money has gone for.

Transparency is not just of value in preventing catastrophes, it has a powerful positive side to it as well. Studies show there are strong positive considerations too. A 2019 article in FastCompany reports:

“a recent study published in Journal of Accounting, Auditing & Finance. Researchers from Villanova University and University of Wisconsin found that charities earning a seal of transparency from the nonprofit GuideStar gained an average of 53% more contributions one year later. Those ratings currently cover four levels, each with differing degrees of public disclosure (bronze, silver, gold, and platinum). And the more transparent a group gets, the potentially bigger the bounce. For instance, silver-level awardees earned roughly 26% more contributions than those with bronze.”

Integrity and transparency help build a healthier and more generous society. When people know what they are going is ending up where they intended it to go, they are more generous. A transparent society is a kind society. We can all give more when we know where it is going to.

In Parshat Pekudei, the Torah is sending a reminder for generations: make sure you follow the highest standards of transparency and integrity. Especially when it comes to handling money and communal resources, we must follow the highest levels of integrity and transparency. It is no surprise then that this endeavor, once assembled, was blessed with God’s presence:

As we embrace a world with more information available than ever before, it is essential that who allocate public funds and charities conduct themselves with utmost transparency and avoid any kind of conflict of interest. Following Moses’s lead of sharing exactly what went where and how money was spent with lead to the blessing of “the glory of the Lord filled the Mishkan.” and benefit all.