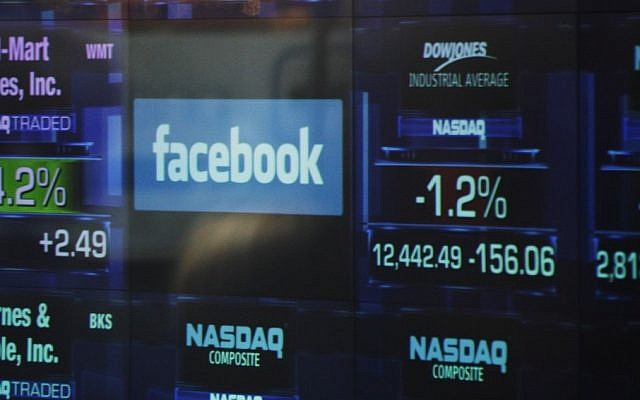 The Facebook logo appears on a display inside the NASDAQ Marketsite in Times Square. (photo credit: AP)

No one can deny the world-changing effect of social media. I personally remember when email was considered revolutionary. Before that, the fax machine felt like something out of Star Trek. I remember sending faxes to colleagues and friends, and feeling like I had just placed the printed copy of what I wrote into a transporter. Today, faxes are holding on but slowly dying as a common means of communication. However, at least in Israel, many patients still receive lab results and other medical documentation via fax. What this proves is that even something old that works, keeps being used. There is an important lesson in this simple message.

Email is still extremely popular and, at least in business interactions, continues to be a fast and simple means of communication. I know a great many people over the age of 70, who discovered email very late into their lives but now use it as a daily means of communicating with friends, children and other family. I’ve seen the excitement on their faces as they see a return message. I imagine it is the same excitement that they had when they were teenagers and they received a written response to a letter they had sent. The only difference is that email is effectively instantaneous while old-style physical mail [also called snail mail] used to take a couple of weeks to make the trip. So for the younger people reading this, can you imagine writing down a set of ideas and having to wait  a month [2 weeks there and two weeks back] to get a response? There are people who bemoan the loss of the written language. They claim that email has destroyed the ability of people to sit and contemplate long, poetic messages that are then sent to others. I must admit that when it comes to technology, I am far less romantic. I believe that regular mail and email and all forms of communication are meant to share ideas and to create bonds between people. If the language of such communications is less than flowery, I can personally live with that very well.

According to some estimates, Facebook is used to varying degrees by a billion people in the world. Never before has there been  such a technology that has created an online presence for so many. In fact, some already argue that many people have effectively transformed themselves into virtual beings who effectively live on the Internet via tools like Facebook. However you view Facebook, you cannot deny its influence and its potential, both as it exists today and in the future.

Facebook is a fascinating case study. There were products online that were very similar to Facebook yet never came close to Facebook’s success. Why Facebook became as popular as it did may be a case of  a digital perfect storm. It could very well be that the world was ready for a new social media tool and embraced Facebook as it spread beyond the walls of Harvard University, where its creator Mark Zuckerberg, started it. I would not pretend to understand the key trigger that launched Facebook into the stratosphere. But now that it is so pervasive, my question is how to best use it for improving the quality of medical care.

Ultimately, Facebook is a form of website that millions of people have and share. Rather than needing to go to a web design specialist [and pay them a significant amount of money], Facebook provides an immediate method for sending out notifications, uploading and sharing images and videos, keeping track of a contact list, and allowing for plug-ins that have various additional capabilities. In some ways, it’s brilliance lies in its effective simplicity. Please do not misunderstand me. Running a system like Facebook requires a tremendous amount of effort and engineering. But from the user’s point of view, sending an update or responding to one from a friend is intuitive and takes only moments. In this way, Facebook is like a fax machine.  And like a fax machine, it has a very good chance of continuing to be a useful tool for many years to come, despite competition from other technologies.

Let’s imagine how Facebook could contribute to a person’s health. Firstly, the simple act of socially interacting with others, even if only online, can have a tremendous positive effect on a person’s mood. It was not that long ago that when a child moved to a new country, communication was sparse and often insufficient from the parents’ point of view. Today, a parent need only “friend” their children and they will have a constant feed of information on their children’s status and news. I think that every Israeli appreciates the power of and need for social media updates, after the last 2 week’s events. Before the American-based parents can worry, their children have already posted an update on Facebook saying that all is well after the last rocket attack.

The Facebook experiment, which I described in a previous blog, showed very strikingly that minor changes in the tone of news updates can affect the mood of the reader. So imagine how powerful an effect there is on a person when learning via Facebook that a loved one has just had a new child. I have no data to prove this following thought, but I suspect that there are many people in the world who would have otherwise hurt themselves or even committed suicide were it not for social media like Facebook. I am also painfully aware of the negative effect that social media can have, and the tragedies that have been associated with online bullying. Perhaps physicians and specialists in the psychological sciences should ask as a standard part of their patient interviews, if the patient uses social media and what role it plays in their lives. This is obviously not something that I was taught to ask during my medical school training, nearly 30 years ago, but it should be part of most doctors’ initial question-and-answer period with a patient.

I mentioned above that social media is an opportunity for people to find like-minded individuals and to share more specific information with this group. One website that derives tremendous benefit from social media is called “patients like me“. As stated on the home page of this website, its intent is to:

The concept is as brilliant as it is simple. Although Facebook could be used for sharing information related to a person’s medical status, “patients like me” is already designed to encourage groupings based on various illnesses. Therefore, if a person should be, G-d forbid, suffering from cancer, they can find a group dedicated to this topic. The first thing such a person will do is read the vast number of comments from previous members. Just this one action will already remind  the new user that he or she is not alone and that there are people out there who have had similar experiences  and can share pointed advice. Sometimes, despite being under the care of an excellent physician, members of the site will learn of alternative options that could even be lifesaving. The simple fact is that most doctors cannot keep abreast of every medical update that there is. But a group of thousands to tens of thousands of people with a specific disease can altogether know a tremendous amount about  the disease and stay constantly on top of the latest information.

When I first learned of “patients like me”, I was struck by the tremendous opportunity for pharmaceutical companies to collect information on the medications they produce. This idea of mine is far from unique and collaborations between pharmaceutical companies and this website are already in place (Click here to see an article about such a collaboration). The power of “patients like me” is tremendous. When pharmaceutical companies do human trials to study the benefits and side effects of a medication, even if the trials include tens of thousands of people, they are still able to miss very infrequent but very serious complications. By reviewing people’s comments  from a website like “patients like me”, a pharmaceutical company can pick up on an occasional reference to an unexpected benefit or downside to the medication. The key here is that potentially millions of people can share their experiences on social media sites. So if you collect this information and study it, you can discover information that would be very difficult to discover in other ways.

I think it is clear already that social media can play a critical role in the health status and medical care of a person. The next question to ask is if individual doctors should be using social media to follow their personal patients. This is a huge topic on its own, and I will begin to address it in my next blog entry.