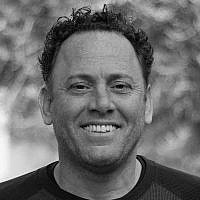 The Blogs
Yoav Ende
Apply for a Blog
Advertisement
Please note that the posts on The Blogs are contributed by third parties. The opinions, facts and any media content in them are presented solely by the authors, and neither The Times of Israel nor its partners assume any responsibility for them. Please contact us in case of abuse. In case of abuse,
Report this post.

When I was discharged from the army in 1997, I arrived at the Western Wall to pray as I had in previous years. In previous years, though, there had been no demonstrations, no violence: just people sitting in prayer around the Kotel plaza; some chatting with friends, others laughing. It’s hard to believe, but there was a time when we read the Torah together, young men and women (some in a tallit) and everything was quiet. Haredim passed us by, looked at us curiously, or asked questions. But nobody interfered.

That year, however, there was an incident at the Kotel that’s forever seared on my memory. We had gathered together to pray on Tisha B’Av. This time, however, we did not pray in peace. This time, a large group of ultra-Orthodox cursed us and demanded we leave. To make matters worse, instead of protecting the worshipers, the police forcibly pushed us all outside the Dung Gate.

I remember my father and others – who so loved this country they left their homelands to make Aliyah — trying to read the Book of Lamentations as they were pushed by police, cursed at by the ultra-Orthodox. I remember dodging objects thrown at us. The kaddish, the mourner’s prayer, said that day, echoes in my head still like a scream.

Since then, the mechitza (the partition separating men and women) has been moved around many times on the plaza, and the wearing of a prayer shawl by a woman has become tantamount to a violation of the law. For those of us who find it impossible to remain indifferent to this injustice, it’s all we can do not to bury our heads in shame for the actions of our country.

In recent days, we’ve seen a compromise reached regarding the Kotel: there will be an official, egalitarian section recognized by the State of Israel as “an Israel section.” Each person may choose now in which section he or she wishes to pray: in the Orthodox section or in the section that is in the spirit of Conservative and Reform Judaism. And for the first time, the laws of the State of Israel will expressly enforce that “the local custom will be based on the principles of pluralism and gender equality, and prayer in this place will be egalitarian prayer, with women and men alike, without a partition.”

People might imagine that I — a Masorti rabbi whose “pulpit” is a pluralistic educational center in the Lower Galilee — celebrate this decision, but the truth is, I do not.

An old friend of mine once suggested that sometimes we cannot recognize history when it is in front of our faces. Perhaps, he is right. Perhaps, it’s impossible for me to understand now, while it is happening, how significant we will one day declare this event in the history of our country. For now, though, while I am slightly hopeful as a result of this decision, I am not yet celebrating.

As a person who prays, I do not need definitions in order to pray. I simply seek God in my prayer and ask that my heart will work until I am able to feel elation and excitement. Thank God, I get many of these moments. When I go to the Kotel, however, I do not go there to be alone. To pray and to think about prayer at a Kotel devoid of people saddens me. At the Kotel, I seek togetherness. More so, I don’t want to pray only with people who are similar to me; I want to be with people I do not interact with every day. I desire new perspectives, new learning, renewal, strength. For this reason, I enter the men’s plaza, where among those standing may also stand those who once spat on me. We stand together, pray together, and sometimes make conversation, even.

I go to the Kotel not only to meet God (because “the whole world is full of His glory”), but also to stand with the rest of the nation. When a person arrives at the Kotel, he meets history, his own present, and our nation’s communal future.

That I can go to the Kotel as a community, with my wife and children, and officially pray without a fight is important. However, I’m afraid that the hatred will not abate, that the compromise will be only that – a compromise, not a step forward. This compromise at the Kotel will not serve to educate various constituents who are still adamantly against a religiously pluralistic State of Israel. Rather than choosing to remedy the untenable religious situation in our country, the government has instead supplied us with this compromise at the Kotel as a way to silence the larger conversation about the issue of religious pluralism in Israel. Indeed, this compromise has no impact on the fateful issues still relevant to so many of our citizens, such as conversion, marriage, and burial.

So while this decision is indeed momentous, we should not forget that while symbols are important, people are more important. Now, after a long struggle (and congratulations to all those involved in this work) there has been made a compromise: a separate section. Perhaps historically it’s the start of something significantly better than what was, but the Kotel is not, and should not be, just a wall facing a certain direction. The Kotel is not only the wall above which the Temple once stood. It is a collection of stories. It is where many Israeli soldiers swear allegiance to the state. It is a place of crying out, of joy, of excitement. It is a place of memory, of sacrifice, of unconditional love, of reunion. And, yes, it is also a place of struggle (though I wish it were otherwise), as it relates to the identity of our society.

Twenty years ago, my father and I were pushed away from the Kotel plaza because we dared to sit there and read Lamentations with our friends. Today, if I wanted to, I still cannot sit in the plaza. So how do I feel about this potential momentous time in our history? Bittersweet.

I will go to the Israel section of the Kotel, and there, I will pray for this: May my children not be exposed to the hatred to which I was exposed and may the Kotel itself slowly forgive and forget. And therein may we be comforted.

About the Author
A Masorti rabbi, Rabbi Yoav Ende is the Executive Director of the Hannaton Educational Center, located on Kibbutz Hannaton in the Lower Galilee.
Comments