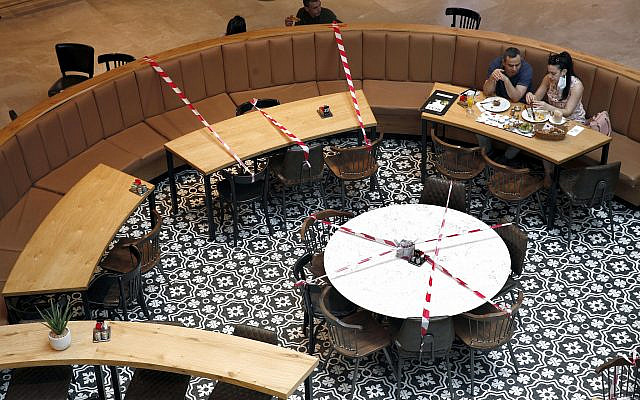 A couple eats in a restaurante at the Azrieli Malha Mall in Jerusalem next to blocked tables in order to keep distance between the customers in the framework of the Health Ministry rules against the coronavirus pandemic.

A few days ago many people started feeling that the coronavirus pandemic is over and then new 124 cases reminded us that is too early to connect the word to the past and we must keep the basic rules of hygiene, protective masks and social distance.

Like in many other issues, opinions and personal behaviors are very different.

At the Azrieli Malha Mall in Jerusalem the attitude of the management is very serious: you are not allowed to enter without a mask, the shops limit the number of persons inside, restaurants cancelled tables in order to keep distance between the customers, and a member of the staff reminds to wear the mask to the people that had it at the entrance check but suddenly by surprise is not anymore on their face.

At the Old Train Station complex people wait on the line to get an ice cream and many of them hold their mask even on their way out while holding the ice cream they bought, but unfortunately many other people don’t keep any rule.

At the beach in Tel Aviv is hard to find one single person wearing a mask.The situation is better at the promenade where some people among walkers, runners and visitors cover their faces but still a minority.

On Rotschild Boulevard a couple seating back to back one with mask and the other without illustrate in its best way being close but thinking different.

78 of the new Coronavirus cases were found at the Gimnasia High School in Jerusalem and its principal said he thinks the contagion happened during the break of using masks during the extreme hot days 2 weeks ago, authorized by the Health Ministry.

Wearing masks is the most basic tool not to spread the virus. Let’s hope everybody learned the lesson now and not only the high school students. 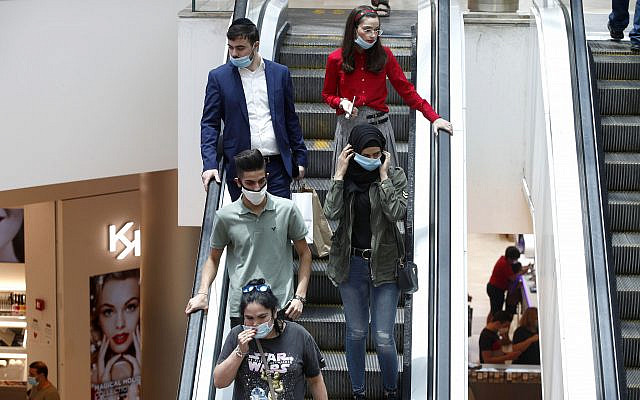 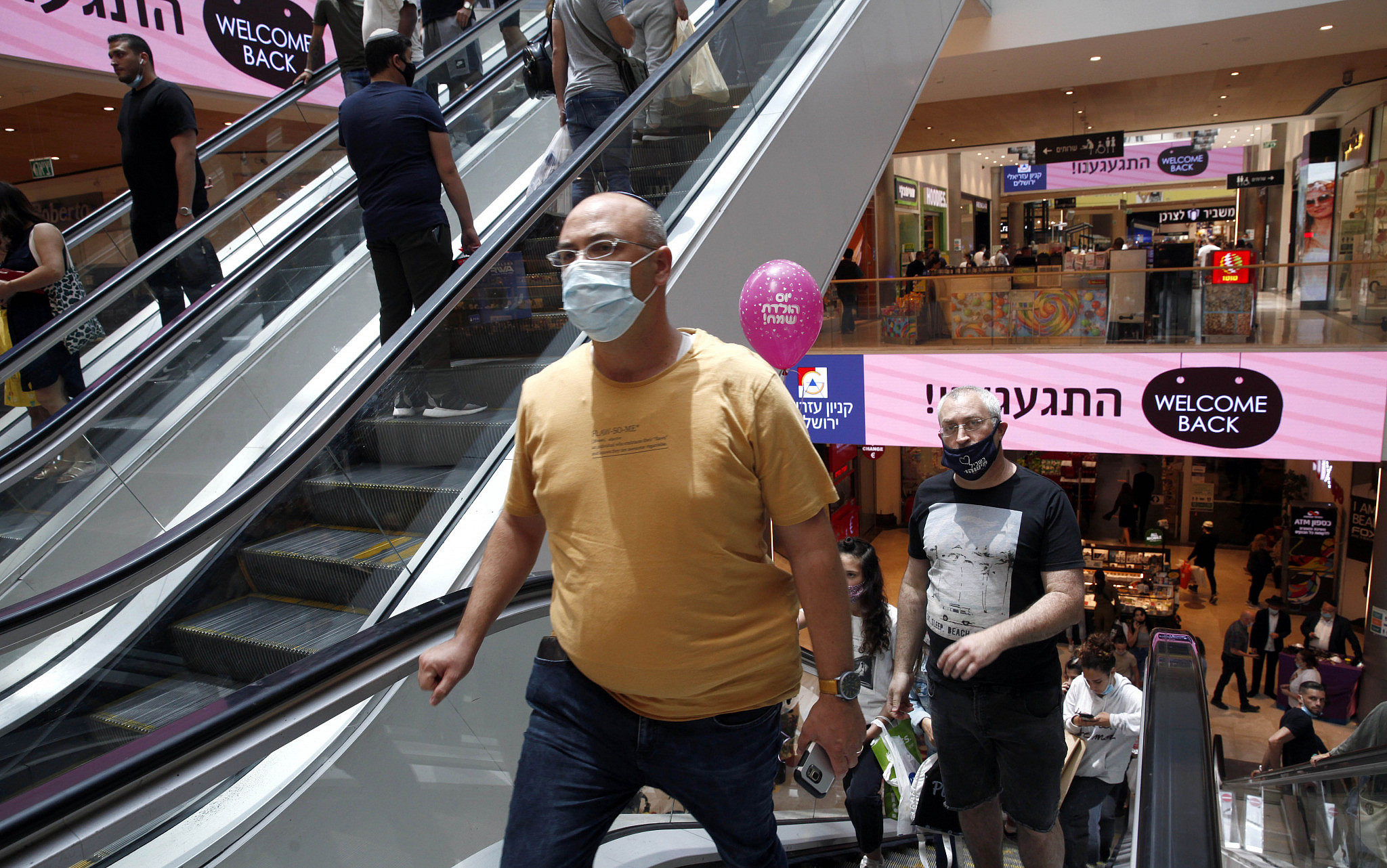 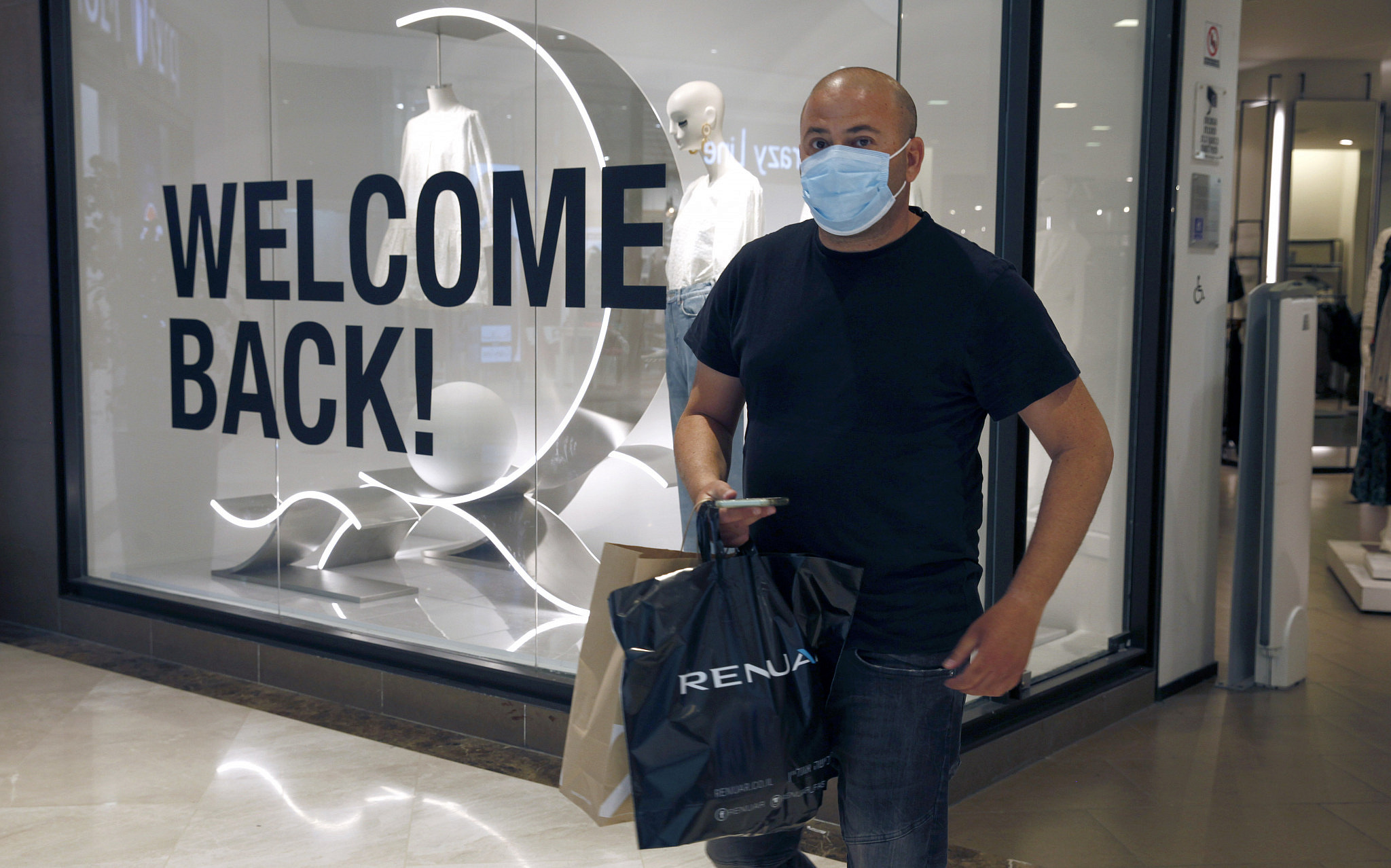 People wear masks at the Azrieli Malha Mall in Jerusalem 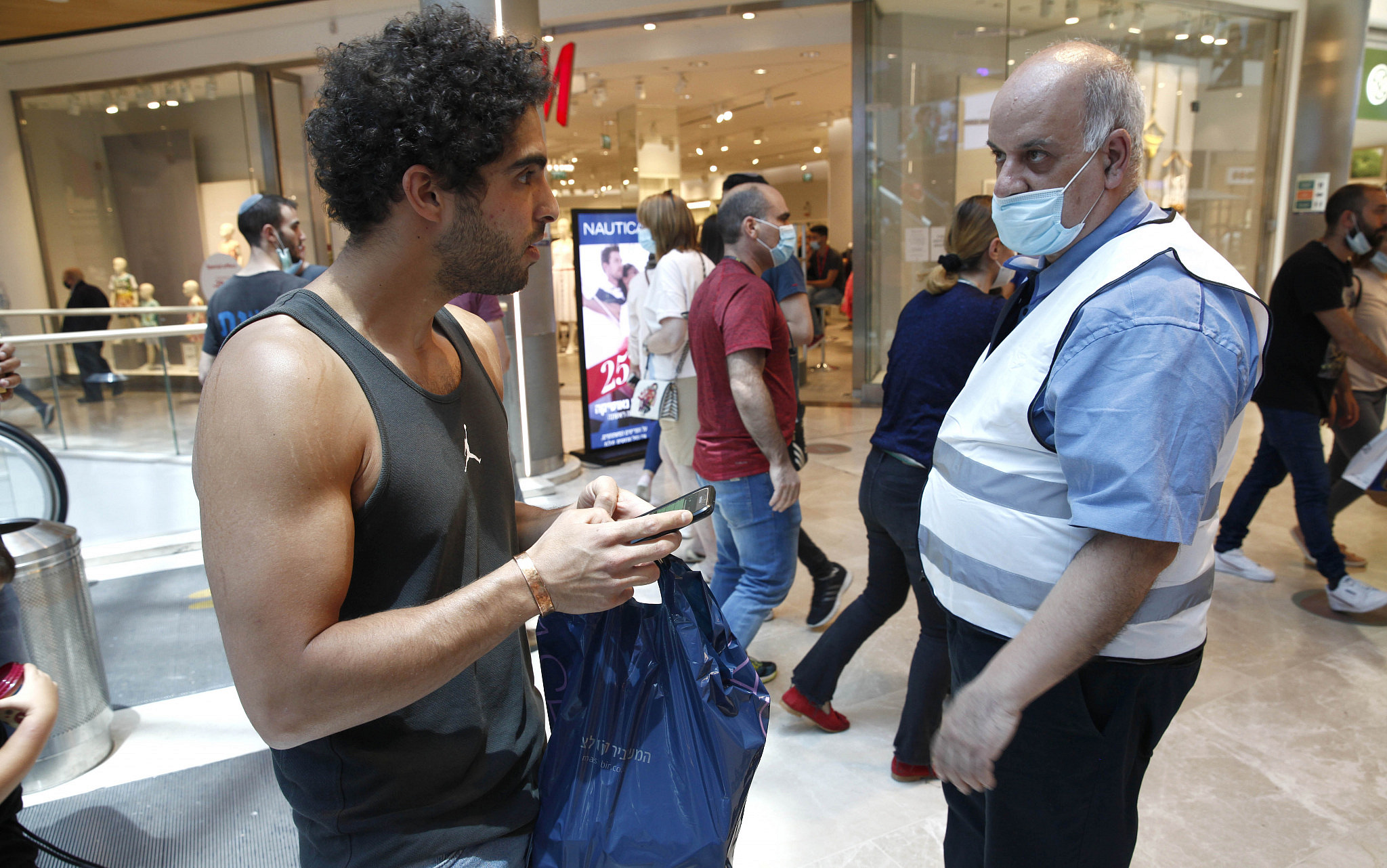 A mall worker asks a young man to wear his mask. 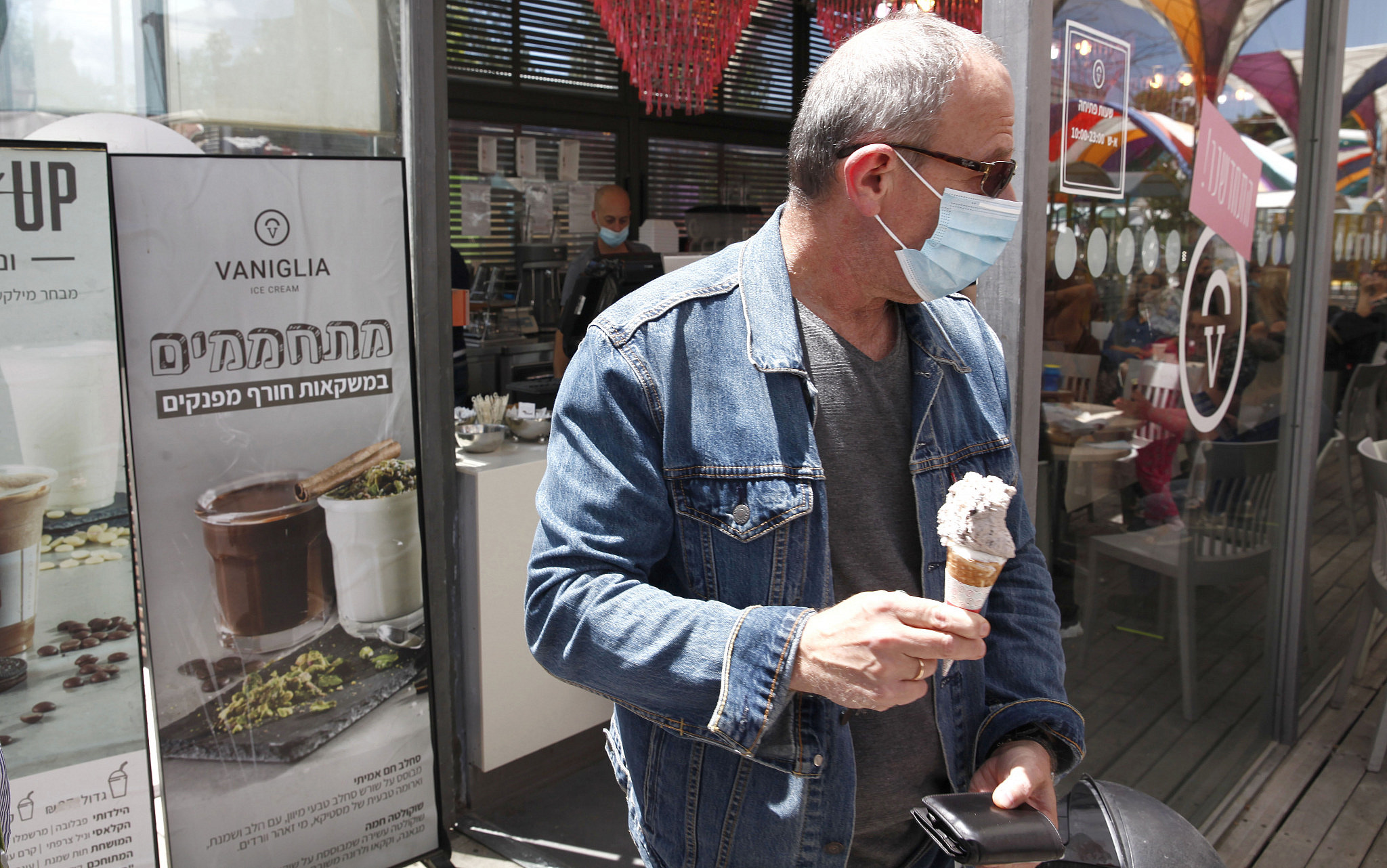 Big challenge: a  man holds his mask while holding an ice cream till getting to his table at the Old Train Station in Jerusalem. 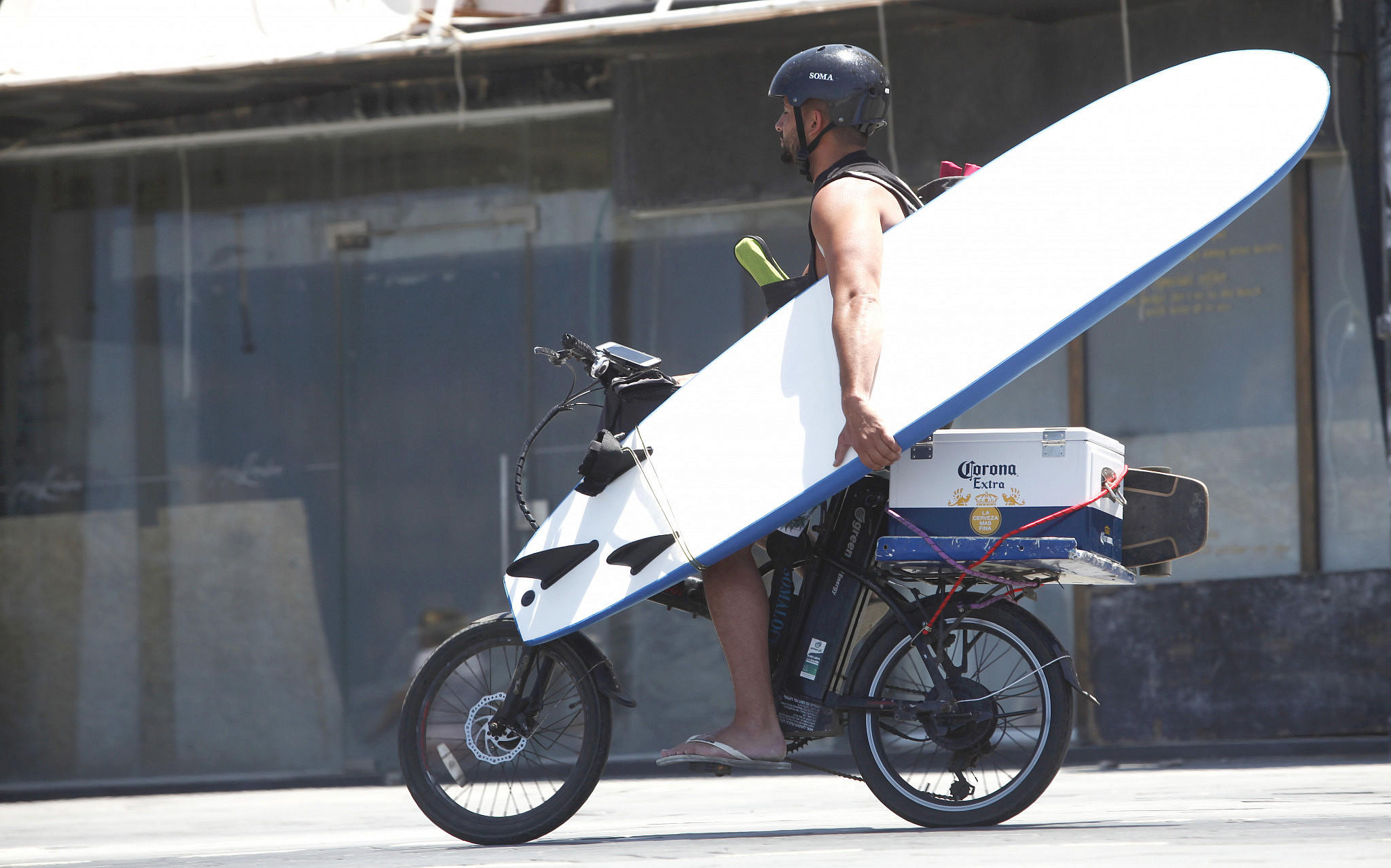 A surfer in Tel Aviv carries a special box in special times. 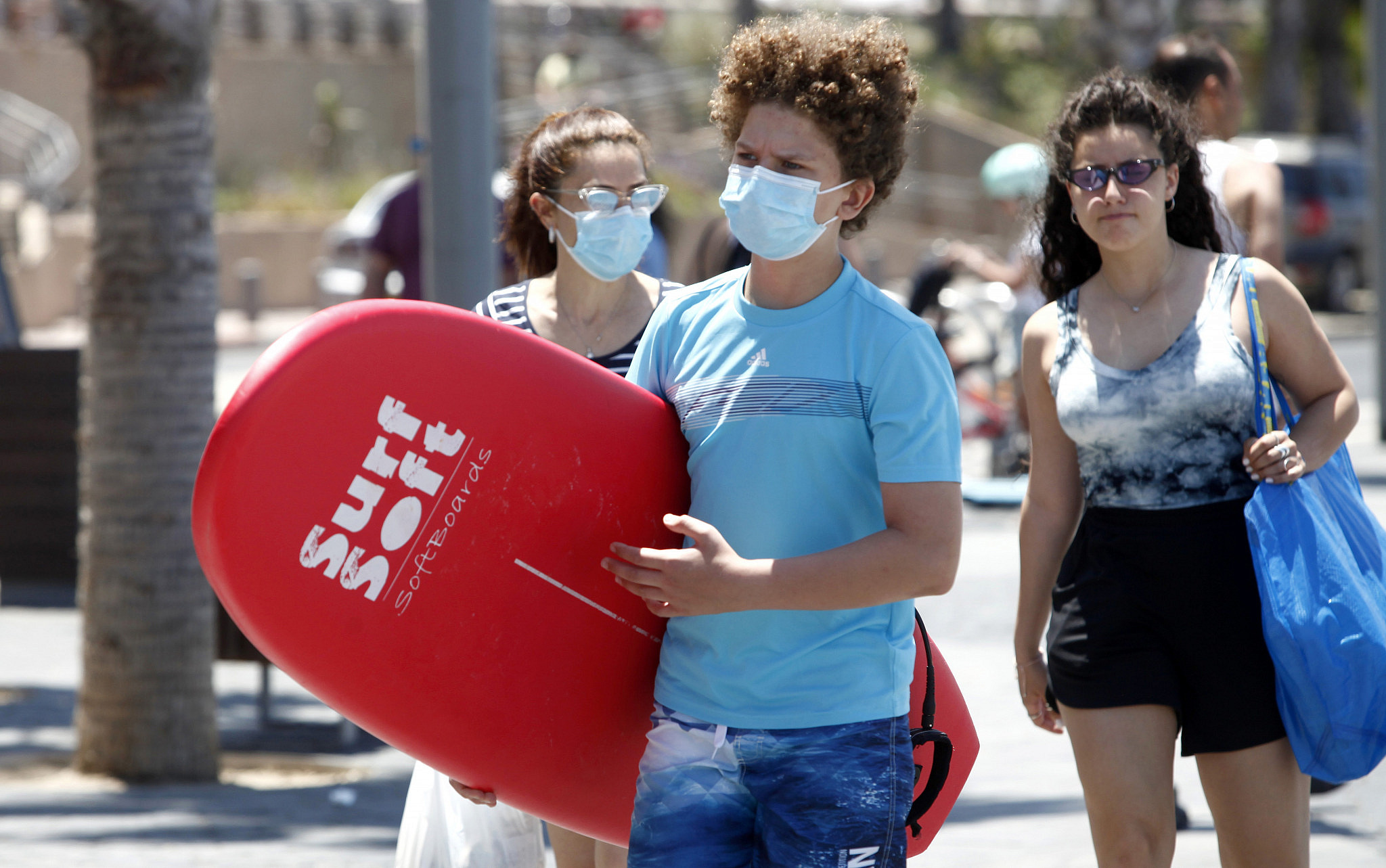 While a more disciplined surfer gives a better example about keeping the rules against the Corona. 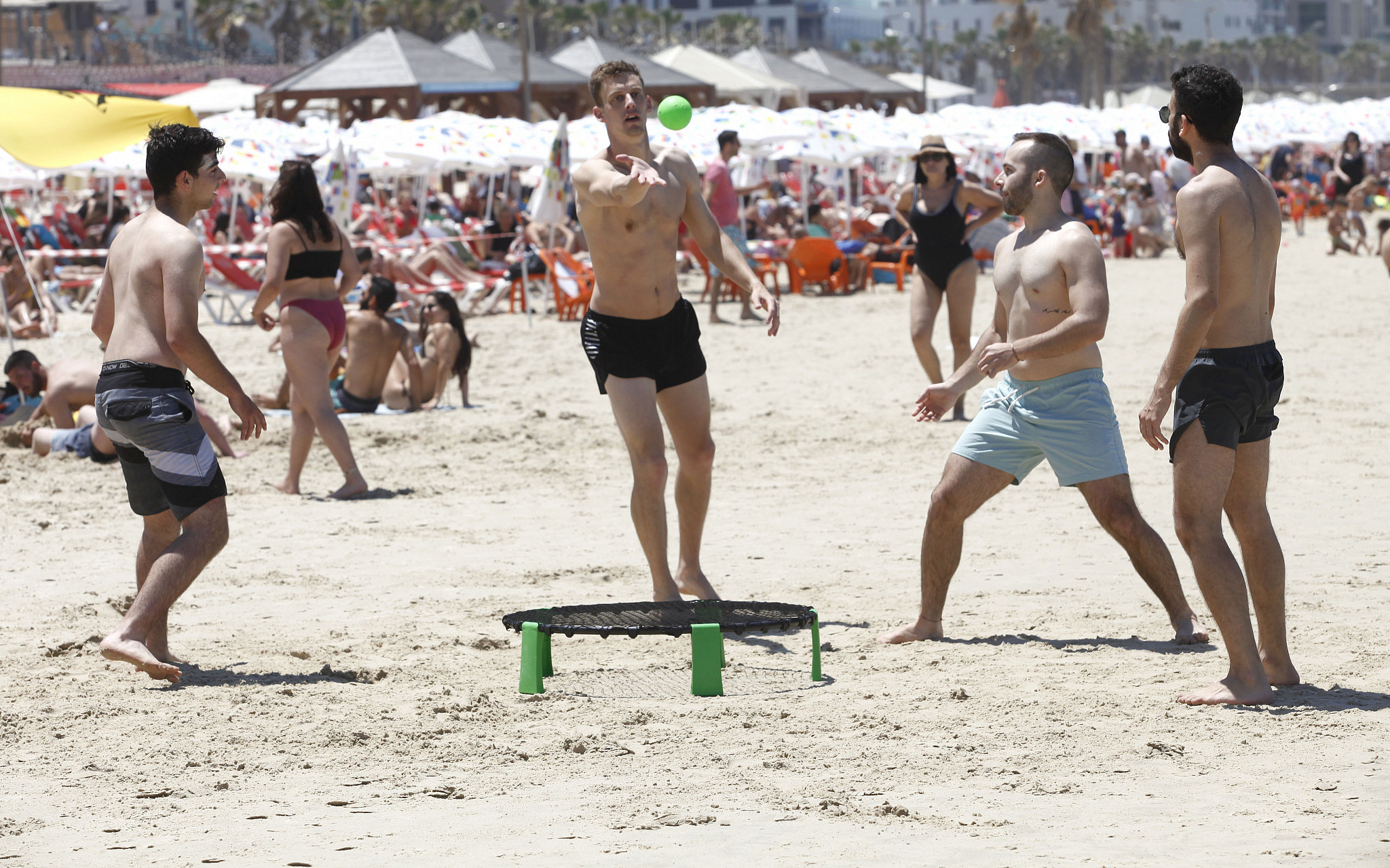 No masks in the beach in Tel Aviv. 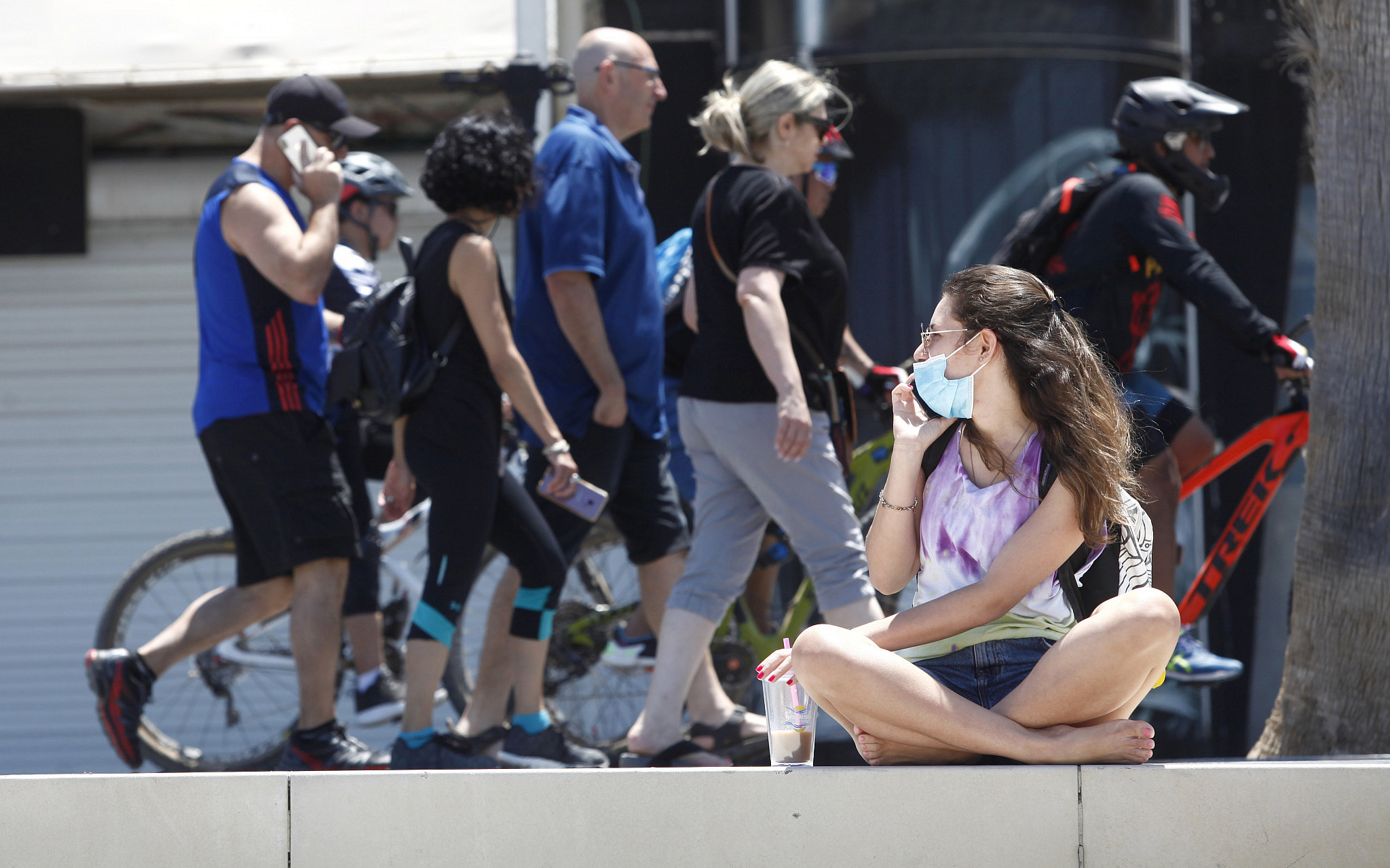 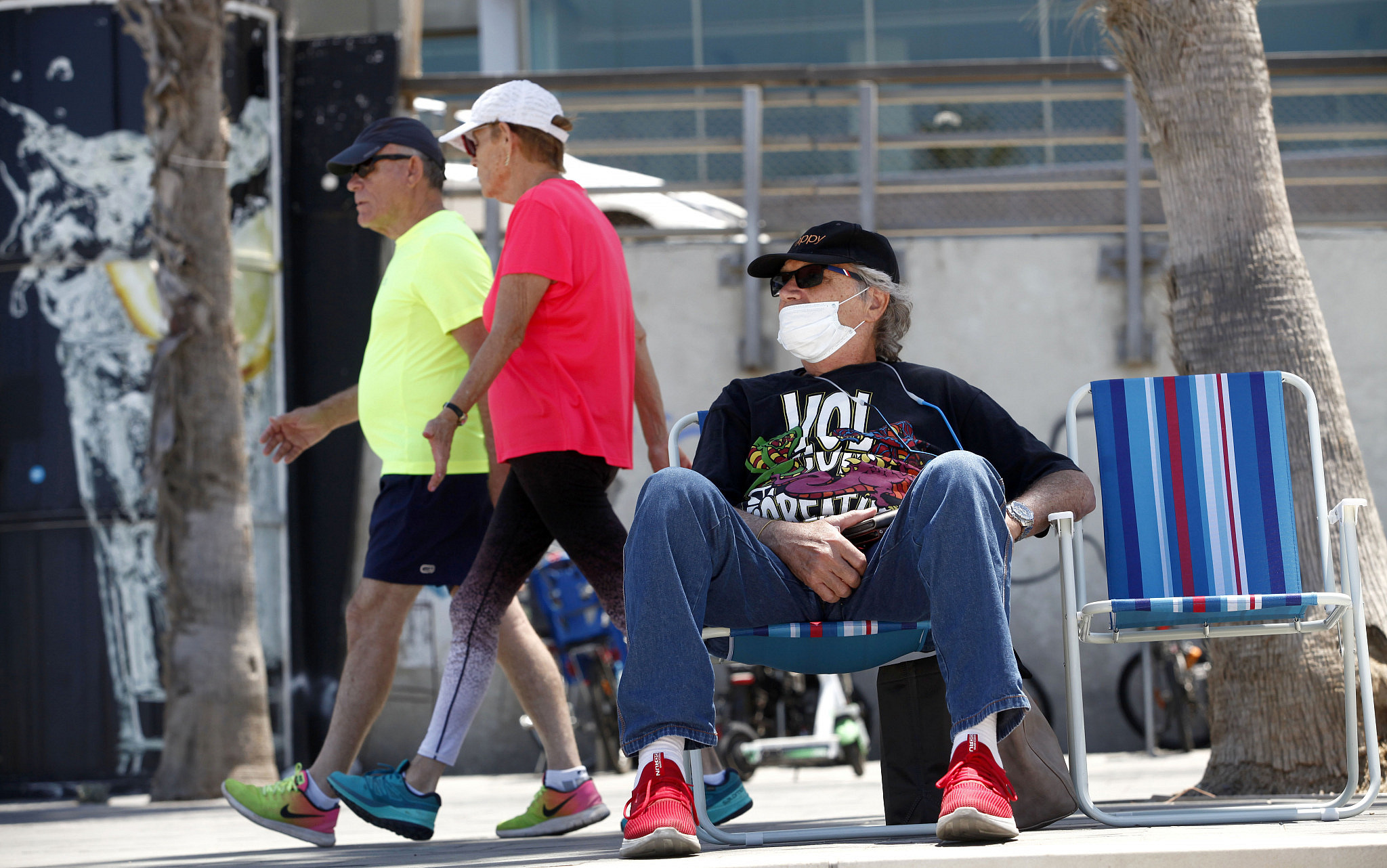 A few at the promenade 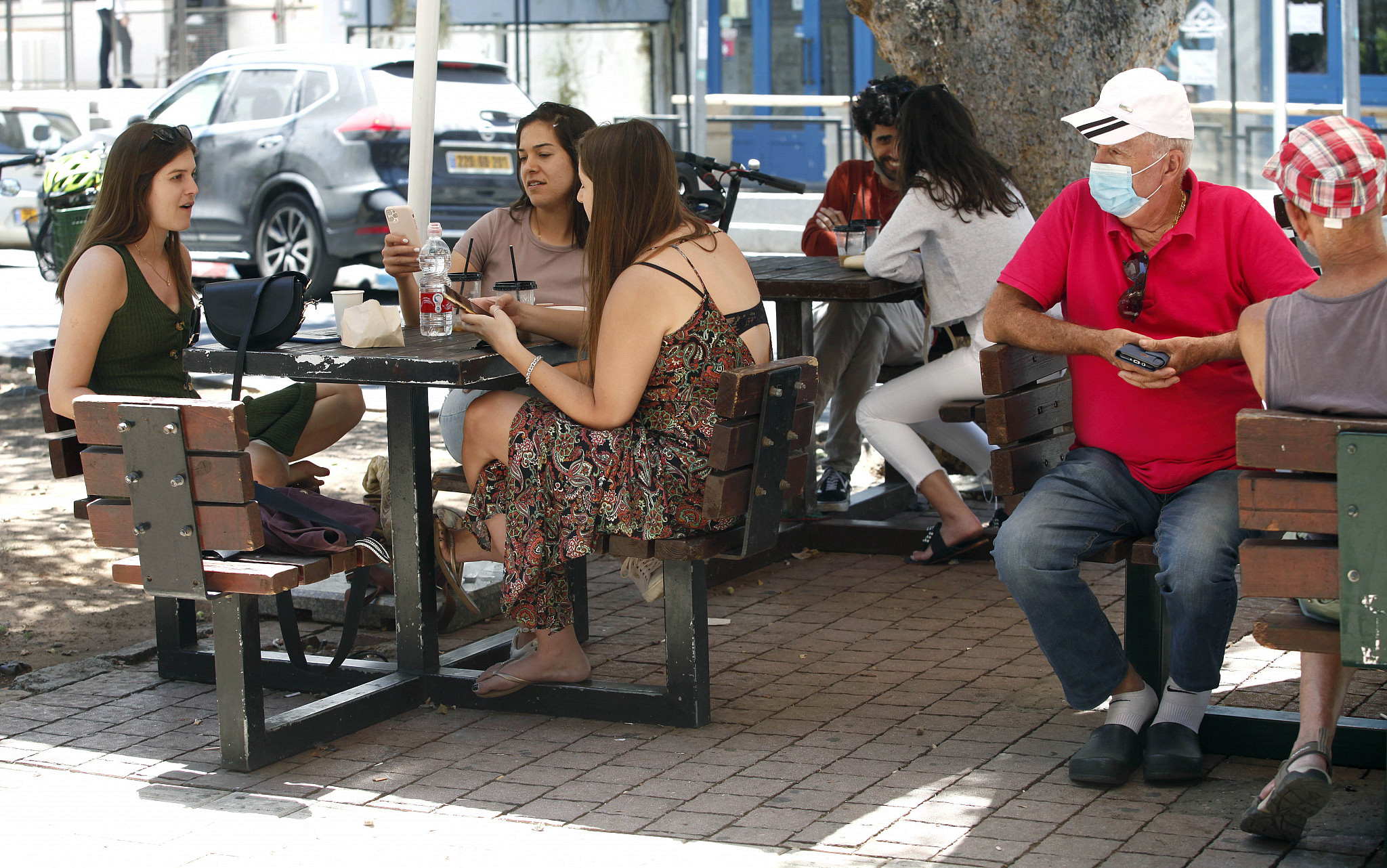 The age says something about the attitude on Rothschild Blvd. in Tel Aviv. 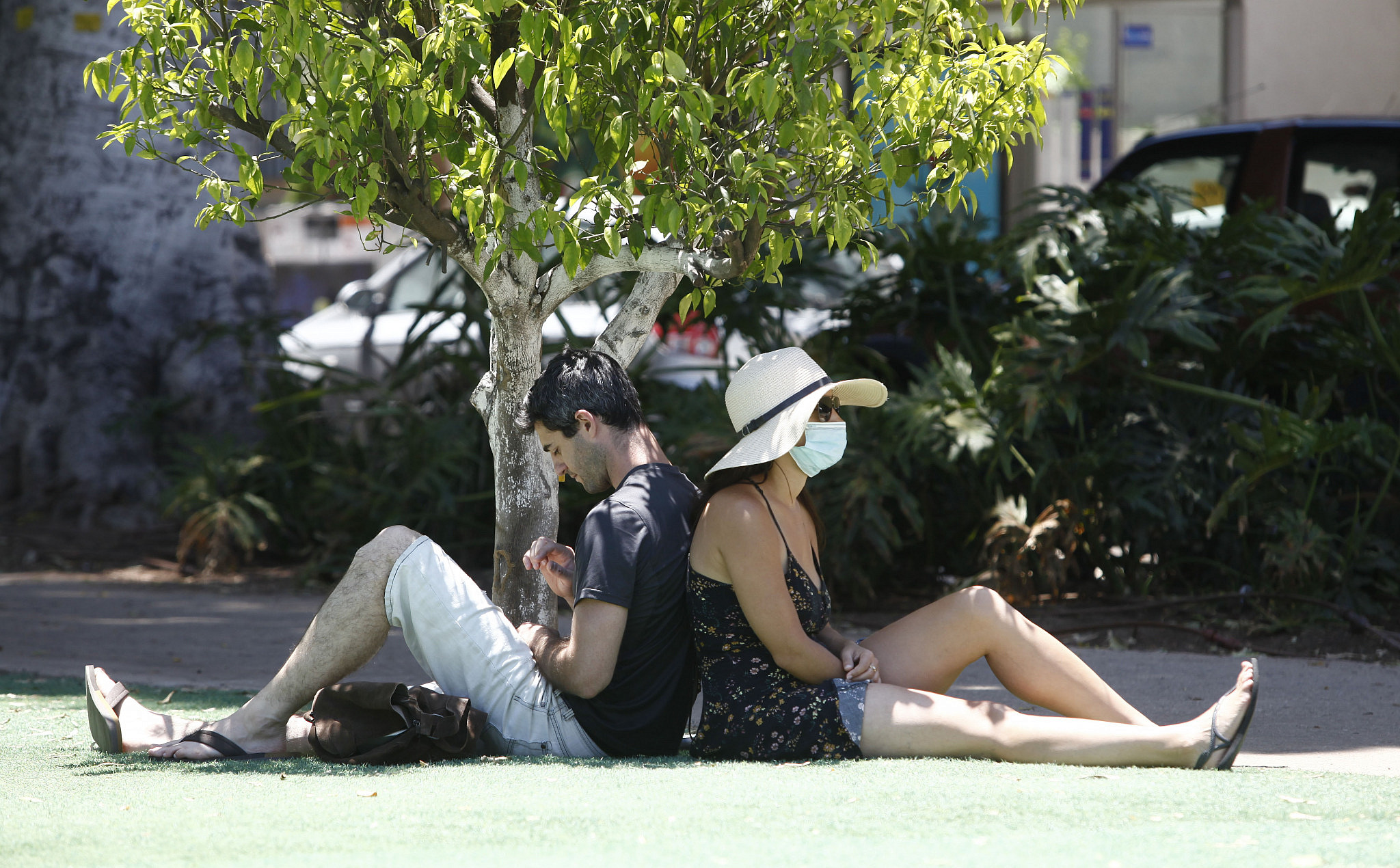