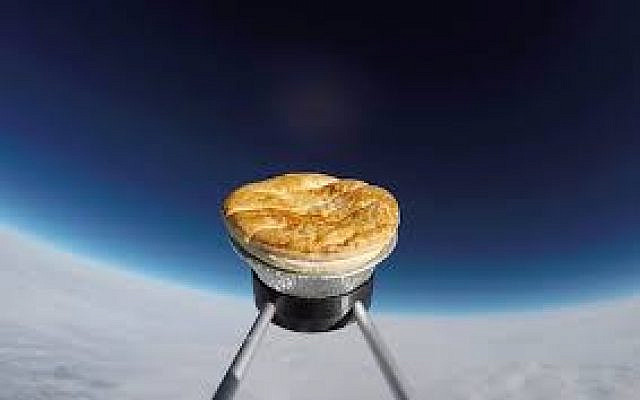 A Pie in The Sky (Courtesy The Telegraph)

Playing with the TV remote, I rather carelessly pushed the wrong button and found myself watching Sky News. This British broadcaster and telecommunications company claims to be based in London, which it further claims is in the United Kingdom.

We would question Sky News’ knowledge of geography. We know that London is somewhere in Europe and has no connection with the UK. It was, of course, founded quite recently, in the year CE 43, by the Romans under Emperor Claudius, as Londinium. While the city is currently under occupation, we look forward to the Romans returning to free the city.

Jerusalem is somewhat older than the Londinium upstart. Apart from the Bible, the earliest reference to Jerusalem, in Hebrew, has been found on a 2,700-year-old (radiocarbon dated) papyrus scroll.

Sky News is broadcasting from a land with a colourful history. In 1835, the prime minister, Benjamin Disraeli, was attacked in the House of Commons by Daniel O’Connell, an Irish Roman Catholic. Disraeli replied – While your ancestors were painting themselves blue, my ancestors were priests in the temple of Solomon.

For Sky News the colour should be red – red-faced from embarrassment or shame.

Of course, Sky News is not alone in misplacing Jerusalem. William Blake, a poet, painter, engraver, and visionary, back in 1804, was having green thoughts:
I will not cease from Mental Fight,
Nor shall my Sword sleep in my hand
Till we have built Jerusalem
In England’s green and pleasant Land.
(And did those feet in ancient time – William Blake)

But back to the villain of this piece. A glance at sky.com shows the upcoming broadcast of Jerusalem: A Rock And A Hard Place. We are told that “For 70 years Israeli occupation of Jerusalem has defined the city.”

Yes, Sky News believes we are occupying our historic capital. And, worrying about the last 70 years, happily ignores the 2700 years that really define Israel’s right to the city that King David built for the Jewish people.

We start to wonder if Sky News is a little biased against the Jewish state.

A glance at their website brings some support for the idea. A recent headline screamed, “Pregnant Palestinian woman and baby killed in Gaza violence.” The accompanying article describes their deaths as part of “a fresh round of violence between Israel and militants in Gaza.” Only if we continue to the seventh paragraph do we discover that “the Israeli military insisted the pair died due to a misfiring Palestinian rocket.”

Just a few days ago, Sky News treated us to an interview with an Iranian professor. The program’s presenter, Adam Boulton allowed Mohammad Marandi, an Iranian “government academic” and a professor at the University of Tehran, to accuse Israel of being “apartheid” and carrying out “ethnic cleansing”. There was no attempt to challenge these outrageous lies.
Sky News has become a mouthpiece for anti-Semitic propaganda, allowing the Iranian regime’s hatred of Israel to go unchallenged. Viewers were left with the impression that Israel is an “apartheid regime” which carries out “ethnic cleansing” of Palestinians. This is, of course totally untrue, and Sky News should have taken no part in spreading these lies.

A more fitting summary of life in Israel would have been the photograph of the ambulance crew taking a quick break from ferrying corona patients to hospital. The Jewish Israeli stands in prayer wrapped in his tallit while his Moslem Israeli colleague kneels in prayer on his prayer mat. How’s that for apartheid, Sky News?