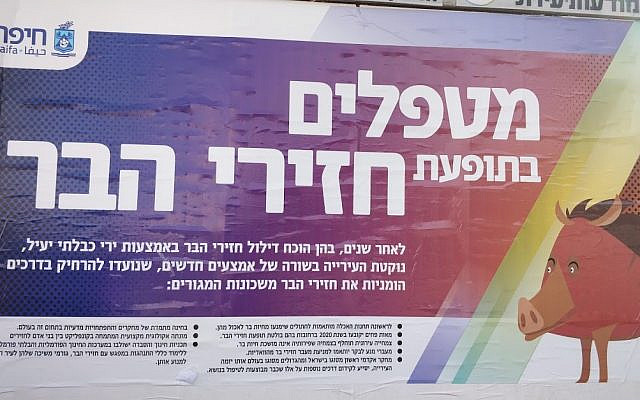 A father films a family of wild boars crossing the street in my residential Haifa neighborhood. The father narrates the film with dire warnings about the nuisance of wild boars and the danger they pose to our well-being. But there is irony in the short clip: The child of the narrator is heard in the background, giggling and completely thrilled with the sight of a line of boars crossing the street. But appreciating the wonders of nature in a world increasingly devoid of large wild animals was not part of the father’s pedagogic agenda. He only wanted his daughter and the world to know that the boars are a danger to Haifa and that he is afraid of an impeding catastrophe.

Many such videos, which have gone viral and are frequently used by the news media to cover the story of wild boars traversing Haifa neighborhoods, are used by residents to argue how dangerous it is to live in Haifa. At the same time, other videos reflect a deep affection for the 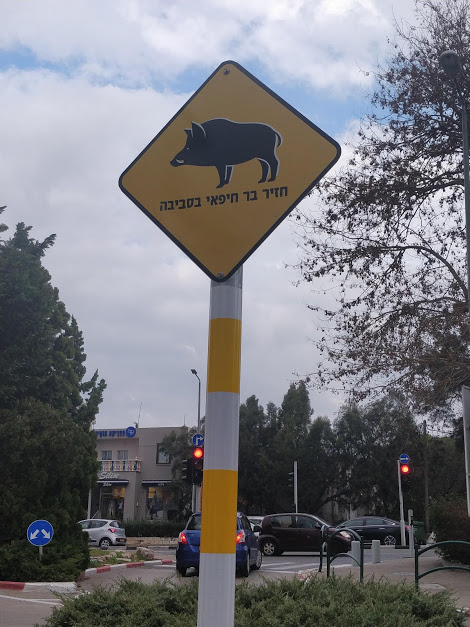 Caution: Wild boars are part of the city’s landscape

boars by displaying them using crosswalks to negotiate busy streets and exploiting inflatable kiddie pools to cool down during hot days. Human attitudes towards the boars are diverse: some fear them, others feed them. Both attitudes are misguided, and both exacerbate a very real problem, rather than solving it. The intensity and frequency of the contact between boars and humans in Haifa is not good for either species and we should work to reduce that contact in the urban domain. But not through destruction of the little nature left for us. Fortunately, our mayor, Einat Kalisch-Rotem, who, along with Haifa’s civil servants, has been thinking about this problem for a while, and they have put forward a comprehensive policy framework for dealing with this problematic relationship without unnecessary hunting. 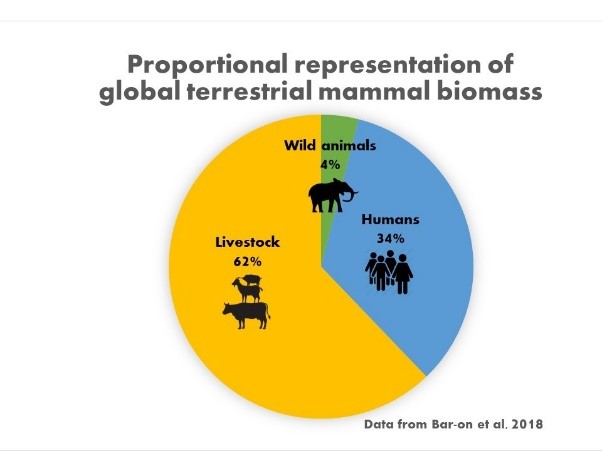 If we combine all of the terrestrial mammal biomass in the world, only 4% would be made up of wild animals.

Wild animals across the planet – like tigers in India, baboons in South Africa, and bears in the United States – penetrate residential communities across the world causing both fear and wonder. They do so because of push and pull factors. On the one hand, undisturbed natural ecosystems are increasingly rare, so wild animals have less and less room on the planet just to exist. On the other hand, human dominated habitats provide a rich smorgasbord of food and drink for wild animals, found in gardens, agricultural fields and trash sources. While the numbers of most species are being driven down to the point of being endangered or extinct, the populations of certain species, like boars, thrive in human company. Haifa’s wild boars find a seemingly endless supply of food in the city’s trash and recycling containers, in piles of food distributed to cats by a small army of residents, and in its public and private gardens. They come into the city because, knowingly or not, we are feeding them.

The former mayor oversaw hunting of boars as the solution. Indeed, it seems to be an easy fix, and it is the one that humans have relied upon for ridding themselves of any living thing that annoys or threatens them. Shooting. Trapping. Poisoning. The slaughter of “pests” seems to be a reliable – if unsophisticated – policy solution.

Whether or not hunting was effective in controlling the spread of wild boars in Haifa is debated. On the one hand, boars are killed and those that remain become conditioned to fear entering neighborhoods. On the other hand, research indicates that boar populations can grow in response to hunting, which disrupts the communal hierarchy of the boar community and leads to greater reproduction rates. To many citizens in Haifa, and to Haifa’s current mayor, hunting is not an option, particularly not before other options are tried (I suggest the option only for boars that are diseased or exhibit hostility to humans).

Having decided against hunting, Haifa implemented a bold and comprehensive policy package for dealing with the problem. The city representatives consulted experts and the public, defined the problem, collected policy alternatives, and began policy implementation.

Wild boar leaving my yard, but only after digging around the garden (photo credit: Uri Eizner).

(Full disclosure: I participated in some policy meetings as a resident of Haifa and a researcher of human-nature relationships policy; my students wrote a policy analysis of the challenge in Haifa and came to very similar conclusions as the city’s experts). The city government defined the problem as stemming from human-animal interactions and not one of boars harassing humans. This is already a good sign, as recognition is given to the fact that in most human-nature conflicts, it is humans who are the catalysts of a bad relationship. The goal of the policy framework is thus to mitigate the harmful aspects of this relationship by minimizing the contact between humans and boars. 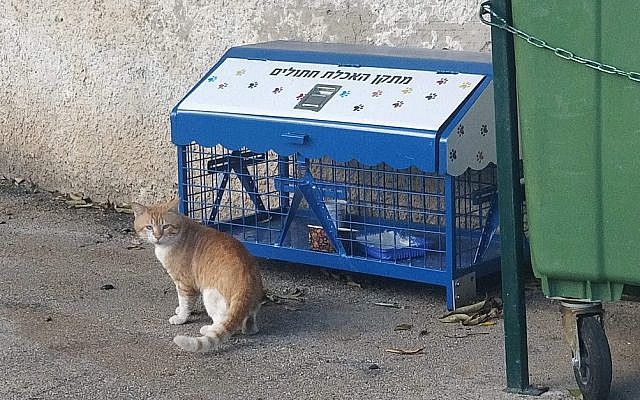 The policy tools were selected after careful and ongoing consultations. These include: anchoring garbage bins so the boars can’t spill them into the street; distributing specially designed cat food receptacles where citizens can leave food for cats, but the boars can’t (theoretically) get to it (note: I oppose feeding cats, as they are responsible for a huge decline in avian and reptilian biodiversity); increasing fences and “cattle” guards to inhibit the passage of boars into residential neighborhoods; ecological monitoring to track the movement and population of boars; choosing vegetation for landscaping that does not attract boars; hiring a city ecologist to work to contain the problem; and, of course, outreach and educational programming to help citizens navigate between real and imagined threats of wild animals, increase the appreciation of the animals interaction in the urban setting, and stop intentionally and unintentionally providing food for the boars. Importantly, the city emphasizes that this is an ongoing process that will be continually monitored to improve the effectiveness of policy.

Unfortunately, initial results (most of the policies have been implemented in the past six months) have been less than impressive. Boars continue to roam the streets, breaking through fences and spreading trash. Many citizens continue to express anger, frustration and cynicism in response to the city’s policies. Some of these responses are legitimate, but others seem petty and politically motivated, as opponents of the mayor have seized upon the issue and magnified its significance, sowing panic rather than educating.

But, as the city representative remind us, the policy is always developing, and changes will be made. Some recommendations: More frequent trash pick-ups to avoid the problem of boars eating out of overflowing bins; Reducing littering and cat feeding; Teaching our children to be cautious of wild animals, but appreciative of nature and aware of our responsibility towards protecting species and habitats. And we cannot forget dealing with the much more systemic problems of human production of huge amounts of trash or the continued destruction of natural habitats as we build further into Haifa’s remaining green spaces.

The case of policy dealing with human-wild boar interactions in Haifa is a textbook example of a good policy process. It reflects the values of the community and its respect towards all life, and at the same time searches for win-win solutions to lessen the friction. As Columbia University environmental policy expert Steven Cohen writes, “… environmental policy never appears as a seamless progression from scientific discovery to implemented public policy… Rather, it resembles a meandering series of disjointed incremental steps… [moving] away from a problem rather than toward a solution…” The city is right to take a long-term view that incorporates the real needs of the human population for safety and economic wellbeing, and respect and awe for the remnants of the natural world that still walk, fly and crawl among us.