The Blogs
Natalie Katerina Hilder
Apply for a Blog
Please note that the posts on The Blogs are contributed by third parties. The opinions, facts and any media content in them are presented solely by the authors, and neither The Times of Israel nor its partners assume any responsibility for them. Please contact us in case of abuse. In case of abuse,
Report this post. 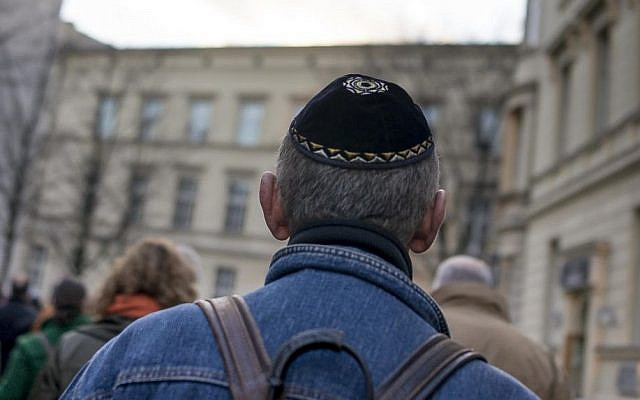 Illustrative: A man wears a yarmulke as he takes part in a silent march to commemorate the 75th anniversary of the Kristallnacht pogroms, Nov. 9, 2013 in Berlin. (Carsten Koall/Getty Images/JTA)

The COVID-19 era brand of anti-Semitism has resulted in worldwide claims that the Jews or Israel are responsible for manufacturing and spreading the coronavirus.

While attending AIPAC in March, I was confronted with the reality of extremist Islamists calling for us all to be burned on one day, and on another day, white supremacists holding racist slogans and screaming profanities in our direction as we hurried toward the building’s entrance.

Blaming the Jewish community—or a symbol of the community—for social ills has led to innumerable pogroms throughout history, including facilitating the Holocaust.

Its particulars are malleable, but its hallmark remains the same: falsely accusing Jews of serious crimes on the grounds of the accuser’s prejudice and in the absence of real evidence in an effort to scapegoat Jews for society’s problems.

The emergence of the COVID-19 pandemic is no exception, resulting in the further mutation of anti-Semitic accusations. It is clear that this prejudicial disease has spread and that our attempts at inoculation have failed.

A barrage of recent tweets implied that Israel’s efforts in finding a vaccine are evidence of nefarious activity, and that lives lost would result in Israel’s profit. Though completely baseless and easily refuted—recently by Austrian Chancellor Sebastian Kurz’s admission that a phone call from the Israeli Prime Minister was what “shocked” him into “wak[ing] up and tak[ing] action” against the pandemic—false rumours persist.

In France—one of the places where Jews were blamed for and then massacred by the thousands in the 14th century for the Black Death—social media has seen a firestorm of posts that include caricatures of Jews poisoning wells (a reference to that medieval plague), cartoons of Jewish public officials seemingly withholding aid from French citizens, and YouTube videos of prominent Holocaust deniers spreading these views—and receiving hundreds of thousands of views. Conventional French media outlets like Voici and France Inter acknowledged that the virus was “triggering a wave of anti-Semitic rhetoric.”

In Romania, Father Francisc Dobos—a senior Catholic priest and the spokesperson for the Archdiocese of Bucharest—said in his televised Easter message that the disciples “feared the Jews, and here in this bracket we should read: feared the virus.”

America is not immune to this mindset. In step with a sharp rise in vandalism and violent assaults against the Jewish community, protestors in front of the courthouse in Columbus, Ohio were recently seen carrying signs of Jewish caricatures with blue skin—indicating the Democrat party—that read: “the real plague.”

New York Mayor Bill de Blasio’s recent tweets singling out and stereotyping the Jewish community as being responsible for the spread of the coronavirus both fosters anti-Semitic attitudes while inviting greater hostility in a city where Jews have already become the primary target of violent hate crimes. The recent incident of a couple jumping out of their car to attack a group of Hasidic Jews—ripping the protective face masks off of men and mothers of small children alike—while shouting, “the mayor says you Jews are the reason we are getting sick,” is evidence of de Blasio’s bigoted words taking hold.

Recently the Iranian government not only openly blamed Jews for the COVID-19 pandemic, but Iran’s Health Ministry is holding an anti-Semitic coronavirus cartoon contest.

UN Special Rapporteur on Freedom of Religion or Belief, Ahmed Shaheed, said, “I am extremely concerned to see that certain religious leaders and politicians continue to exploit the challenging times during this pandemic to spread hatred against Jews and other minorities. We must reject anti-Semitism and other forms of intolerance and discrimination now.”

In times of universal fear and uncertainty, it is critical that reasonable people dispel false accusations so that we can instead focus on finding a real solution to our collective problems.

About the Author
Natalie Katerina Hilder has her BA in International Political Studies. She is an Editor-at-large for the J’accuse Coalition for Justice and has written for publications like The Georgetown Journal of International Affairs and The Jerusalem Post.
Related Topics
Related Posts
Comments