Israelis wake up, your land is not a piece of real estate as Isaac Herzog, Zippee Livni, Yair Lapid, Eitan Cabel and the like of them, and to an extent, even Benjamin Netanyahu see it to be.

Israelis have learned that the Arabs dig tunnels in “their territory” that extend beyond the ambiguous border line they have with the state of Israel into the sovereign land of Israel. These tunnels are to serve as terror tool from which Israel’s enemies can infiltrate her land, abduct, terrorize and cause harm to civilians.

Now Israelis are experiencing political tunnels dug under each politician’s chair to try unseat their political opponent while the political tunnel is serving their ego and self-grandeur and while they are weakening Israel’s democracy and look the fools they are in the eyes of the entire world and more so Israel’s enemies. Yes, the enemies of Israel are watching the political charade or circus, you choose.

Leading this political rebellion are Zippee Livni-Isaac Herzog who formed a marriage for the purpose to unseat Benjamin Netanyahu. I call her “Zippee” because one must zip her mouth. This woman has proven to be unfit to serve in a government already then when she served as Israel’s foreign minister. She however created a new term in the political arena; she is a political harlot, who switched 4 parties and four ideologies in only nine years. Who, in his or her clean sane mind can trust such a person?

Right now Netanyahu is the best Israel has to offer to lead the country and that attests to the available poor political menu. But Netanyahu is better than all other items on the menu.

Livni and her like on the Left regularly travel to Europe to meet their European counterparts who, I will not hesitate to say, allocate to their Israeli spokespeople financial support, and together they scheme how to pressure, subvert, undermine and delegitimize Israel’s stance in the world.

The Herzog-Livni marriage, if elected, will serve their ego and will deliver nothing you seek; you will not get more social justice, you will not get milk at a cheaper price. It is no miracle work as these individuals want you believe. To be security and economically strong and fit, Israelis need to be united, under one hella strong unity government that will drive the country’s security up and the price of milk down. A country that will be able to stand up to anti-Israel propaganda, to the rising anti-Semitism, to political pressure and to the constant delegitimization and demonization of the nation state of the Jewish people, Israel. Remember, a unified and strong Israel means a strong and strengthened entire Jewish nation with ability to support her. 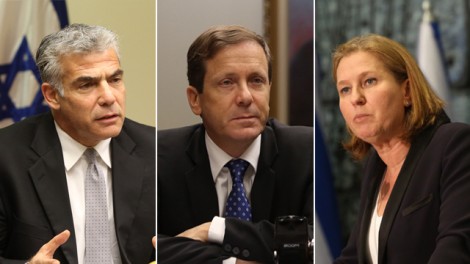 I suggest you be smart, elect smart, demand, with resolve, from your politicians to deliver on their promises and to keep the country strong; do not let it be weakened under the new Israel’s 5th column, the Left, whether it is the High Court, the politicians of all sort and even worse, the media and the citizens who refuse to face reality, facts and truth.

Fight for the soul of our country. Fight for our Zionism cause, which is the Jew’s nationalist, political and culture movement that supports the reestablishment of a Jewish homeland in the territory defined as the historic Land of Israel.

We need a country that can stand up, with dignity and pride, to world’s pressure. Stop being united in time of war only and become united to achieve infinite times of peace and prosperity.

Remember, Chanukah celebrations are upon us; we must fight the Maccabees’ fight, for the soul of Judaism and Jewish sovereignty.