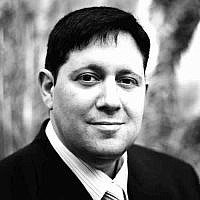 The Blogs
Benjamin Kurzweil
Apply for a Blog
Please note that the posts on The Blogs are contributed by third parties. The opinions, facts and any media content in them are presented solely by the authors, and neither The Times of Israel nor its partners assume any responsibility for them. Please contact us in case of abuse. In case of abuse,
Report this post.

Inside the great and fine White House

there is a lame and blind horse – a real tricky “Mickey Mouse”.

The name of the horse is the American Incitatus.

Sitting on the back, pulling the reins – Mr. Confucius.

when they in the White House pulls the rein;

outside the windows is thunder and rain.

Together with the bad actors, inside the gates,

is a diabolic face with no grace — next to the Gates.

instead of being on the trajectory

of the catastrophic Pompeii.

A lion was waiting near a watering hole.

He wanted to eat a kid — fresh and whole.

Suddenly the lion jumped on a kid

in a frenzy bet for his bid on the kid.

And lo and behold, the flock showed unity,

it protected the kid with herd immunity.

The hedge funds couldn’t get away with their evil loot,

because they were given an almighty boot,

inside Wall Street and outside in the voting booth!

Who would have thought,

that the sweet elite was bought,

and that the Democratic Pocahontas,

went along with the hedge funds ‘monetas’;

in an attempt against, We The People,

it is simply, simply unbelievable!

But with the help of the force of inside moles,

to Iceland and far away icy, icy Poles.

That is the beauty of the reversal of the roles.

Wall Street was beaten at its own greedy game.

The People schooled the swamp with a very big drain.

Better than soft declarations of democracy for We The People;

we would have to “hardwire” rights for We The People;

such as The People’s Housing Scheme;

part of the same noble theme.

Parliament shall make no law respecting an establishment of religion, or prohibiting the free exercise thereof; or abridging the freedom of speech, or of the press; or the right of the people peaceably to assemble, and to petition the Government for a redress of grievances.

The civil rights of none shall be abridged on account of religious belief or worship, nor shall any national religion be established, nor shall the full and equal rights of conscience be in any manner, or on any pretext, infringed. The people shall not be deprived or abridged of their right to speak, to write, or to publish their sentiments; and the freedom of the press, as one of the great bulwarks of liberty, shall be inviolable. The people shall not be restrained from peaceably assembling and consulting for their common good; nor from applying to the Legislature by petitions, or remonstrances, for redress of their grievances.

The poem can also be read in this PDF (click here): Pompeo or Pompeii

About the Author
From London, Britain, Benjamin Kurzweil is sharing his interest in storytelling and comic pun style poems - with a Jewish twist.
Related Topics
Related Posts
Comments