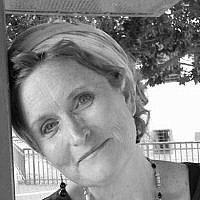 The Blogs
Chava Docks
Apply for a Blog
Advertisement
Please note that the posts on The Blogs are contributed by third parties. The opinions, facts and any media content in them are presented solely by the authors, and neither The Times of Israel nor its partners assume any responsibility for them. Please contact us in case of abuse. In case of abuse,
Report this post.

Two and a half years have passed since we sold many of our belongings, loaded up old furniture on a lift, drove half-way across the US, and boarded a plane to go live in a foreign land that was our people’s ancient homeland. Now, it seems like a lifetime has passed. It is all a fuzzy memory. Let me take you for a brief tour of what it was like back then.

Making Aliyah was never really a topic that was discussed between my husband and me.  It was always a dream of mine, but it never panned out, so I dropped it.   My parents had both passed away when my youngest child, Sarah, was in her first year of life.  Before my mother died, she told me something that that sent shock waves to my soul.  She called me on the phone and told me to get all the children passports, start saving money and get everything in order, because there would come a day when I would have to move my family to Israel. I learned from a young age that my mother was never wrong, so I obeyed her and bought a lockbox and got to work. She died a couple of months after she had given me these instructions. My father died a year later. Their deaths shook my world.   Not long afterward my husband’s mother died.

I’m not really sure how the topic of Aliyah came up again after my mother’s final instructions, but my husband and I sat down and realized that the best place for our family especially for our children would be Israel.  We were idealistic, and wanted to live in our people’s ancestral homeland.  My husband started doing an enormous amount of research regarding where to live in Israel, jobs, schools, etc.  We had to short sell our house because it wasn’t worth the purchase price due to the economy.  We also sold our car and appliances that we couldn’t take with us.  A couple of times during the whole process, we panicked, got cold feet and considering giving up and staying in Michigan.  But there was something incredibly strong pulling us home; almost like a magnet to our souls.

We were warned and sometimes even scolded, by people who meant well, not to move to Israel.  “It will be too difficult!  You can’t do this!  You don’t know the language!  Where will you work? What will your children do?  You don’t know the culture! Your children might not stay religious!”  We pressed on with our faith to guide us.

Fast forward a little:  Our house is short sold, our car is sold, the lift is on its way to our house to be loaded and the phone rings.  There is a national strike in Israel and we will not be able to receive our visas, health insurance and other benefits until the strike ends. There was no timetable given. We purchased temporary health insurance for our family and had some money to get us by. We pressed on. The Friday before we were to leave for New York to catch our flight to Israel, I checked the mail right before Shabbat started. I received an envelope with the wonderful news that the strike was over and we would receive our visas upon entering Israel. Sunday we headed down to the car rental place to pick up our minivan for the long drive to New York.  It wasn’t ready.  There were problems with the paperwork.  I thought I was going to pass out.  Finally, it was all straightened out and we headed back to the house to load up and head out.  My dearest friends and my husband’s sister, father and his wife were there to see us off.  Tears fell.  Hearts broke.  My heart broke because they weren’t coming home with us.  They were staying behind.

I got behind the wheel, hit the gas and took off.  Night fell as we entered Pennsylvania, and the mountain roads were under construction and down to only one lane each way.  The stress was palpable.  Once we made our way to New York our final destination was to be Jamaica, Queens.  As we drove over the Washington Bridge, I almost lost my mind and whatever nerves I had left.  I started to cry.  A still, small voice whispered to my heart, “You’re almost home.”  That neighborhood was like Detroit.  I’ll leave it at that.  When we all woke up in the morning, a wave of peace flooded my soul.  I was on my way home. We arrived at the airport, stood in line, heard speeches that I can’t remember and finally boarded the EL AL flight to Israel.

As the plane began to taxi down the runway, all of the stress of the past couple of years, and especially the past few days, seemed to melt away as a huge weight was lifted off of my soul as I fell into a deep sleep to the “spiritual sound” of that still, small voice saying, “Today, you’re going home.”

When we landed in Israel it was like a dream. We had made the long journey home. Finally. The days following were like a whirlwind:  new apartment, trying to find our way around a foreign town, trying to communicate without a language that I knew, trying to understand why Israelis felt it necessary to have almost everything in the mall, meeting and making new friends. G-d in His infinite wisdom gave us wonderful friends (one in particular, Yosef and his wife, Yael, who helped us set up our utilities and many other things), who helped us to adjust, and many other dear friends who helped with other daily activities that seemed overwhelming at the time.

We registered our children in the local religious school and we registered ourselves into Ulpan (language school).  I didn’t speak a word of Hebrew and could barely read.  One sunny day while we were outside on our lunch break, I looked at my husband and said: “This is it.  We must learn the language and we must make it here.  There’s no going back.  We MUST do this!”  Well, with G-d’s help, we did it.

Our first major spiritual “job” was to ascend Har HaBayit (according to Halachah/Jewish law) as a family, and I have ascended many times since then.  Har HaBayit and Beit HaMikdash continue to be on the forefront of my mind and heart even when I am caught up in every day mundane affairs.

About six months later, I went on my first job interview with the MATNAS (kind of like the Israeli version of the Jewish Community Center), tried my best to do the interview in Hebrew and got the job!  Thus began my slow assimilation into Israeli society. I continued my Ulpan in the mornings and worked in the afternoons. Shortly thereafter, my husband landed a great job as a chef in one of the top meat restaurants in Jerusalem.  My children began making friends and learning both the language and the culture. My children were thrilled with their new found freedom here in Israel. They could walk to school, the mall or the park without fear or worry. This was a luxury that was not afforded to them in the US. Our next summer (which would technically be our first full summer in Israel since we arrived on our Aliyah flight at the end of July) we were introduced to the concept of war.  Sirens were sounding almost every day and drills were conducted.  It just was the way of life and it didn’t faze us.

Fast forward two years:  So much has changed.  We have moved three times (third time being a charm, because this current apartment is a dream come true), made many friends, found our place in the community, our children are happy and speak the language, and have rescued one dog and two cats.  I work only in Hebrew and rarely, if ever, speak English outside of the home (except to my Anglo friends).  My husband has since changed jobs (for the better) and is now one of the best chefs in a new restaurant in Jerusalem.

Now, I know you’re wondering about the recent terror wave that we are experiencing.  Maybe you’re wondering if I ever question my decision in making Aliyah or if I live in a constant state of fear. No and no. I feel safe and secure here in Israel and have no desire to leave.  I know that what is written in Psalms/Tehillim 121 is true: that “The Guardian of Israel neither slumbers nor sleeps.”  Every day we live what is written in those verses.

It seems as if we have been here for a lifetime.  So many blessings have been given to us.  I can’t begin to express how much I love living in Israel.  Are there challenges?  Sure, but there are challenges everywhere. I would rather face them here in Israel.  There’s a peace that I found here that can’t be found anywhere else.  As I hike in the wadi (the valley) with my dog, hear the bleating of the sheep, see the goats on the hillside, the camels gracefully walking and hear the donkeys braying while the Bedouin rest underneath an olive tree, I express my immense gratitude to the Almighty for His loving kindness in taking such wonderful care of my family.  It’s a partnership; we do our best and work hard at the jobs that G-d has given us, and He takes care of the rest.

We continue to see personal miracles on a consistent basis.  It is said that the Land of Israel tests you when you come home to see if you are worthy to stay or not. I have felt that many of our trials came pre-Aliyah and yes, some after Aliyah, but I feel on a daily basis that the Land is embracing us in a very maternal way. Not only are we welcome and loved by the Land, but we have a purpose and a place in it among our people. Faith is alive and real in Israel. Faith isn’t something you read or learn about, but it is something that you live.

I wish that the Jews who live outside of the land of Israel would come home soon and feel the special, loving embrace that only Israel can give. 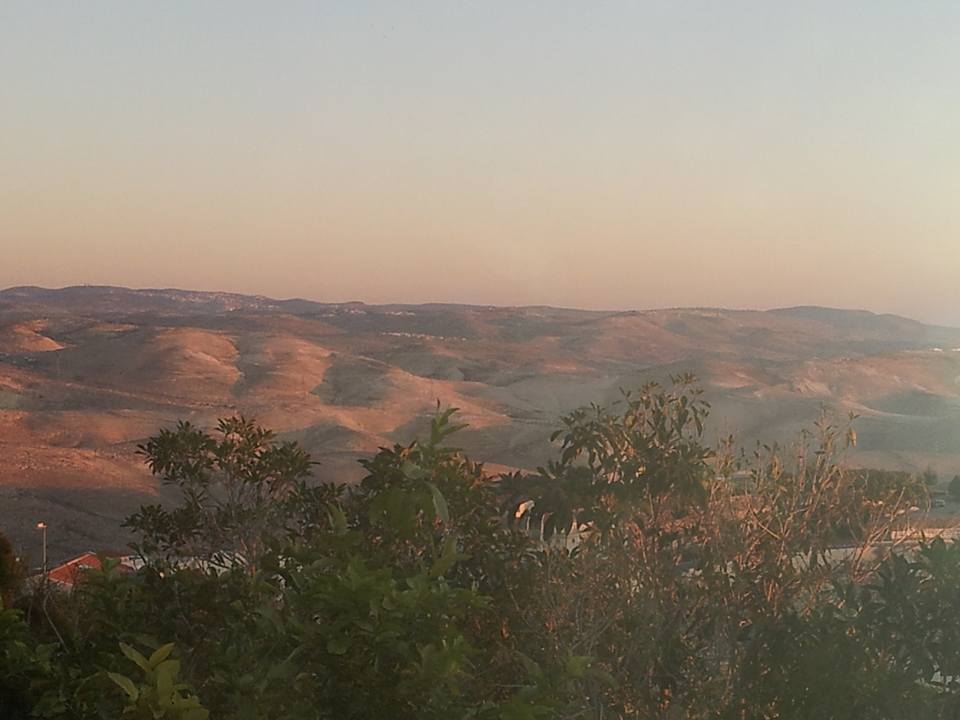 About the Author
Chava lives in Ma'ale Adumim with her children. They made Aliyah four years ago. Chava is an English teacher and a children's program director at a local school.
Related Topics
Related Posts
Comments