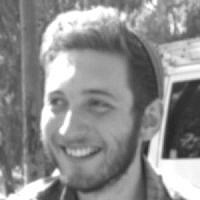 The Blogs
Yonah ben-Avraham
Apply for a Blog
Please note that the posts on The Blogs are contributed by third parties. The opinions, facts and any media content in them are presented solely by the authors, and neither The Times of Israel nor its partners assume any responsibility for them. Please contact us in case of abuse. In case of abuse,
Report this post.

In a recently leaked recording of ex-US Secretary of State John Kerry, the former official is heard commenting on the danger of Israel’s position in the diplomatic stalemate between our government and the Palestinian Authority on a two-state solution, and the genuine threat of an uptick in Palestinian violence as a result of the gridlock.

In response, an interview with Channel 10 found the Prime Minister’s Office redirecting the blame for the impasse to the Palestinian Authority’s “refusal to recognize Israel within any borders.”

Now, before I continue with this article, I am compelled to make something abundantly clear: Diplomatic pressure and “solutions” to the conflict imposed upon Israel by foreign governments should in no way be taken as gospel, and should in fact be considered with a significant dose of skepticism.

This being said, the exchange in the headlines has reminded me of a principle set out in the Torah of the Jewish people, and expounded upon in our ethical and legal texts.

There exists a teaching in the Talmud, in the section of Sanhedrin, page 32b, expounding the line in the Chumash which states:

“Tzedek, Tzedek tirdof,” or “Justice, Justice, you must pursue.”

The explanation is brought by Rav Ashi, who says that the double employment of the word Tzedek, Justice, is to be understood that one instance refers to “law,” and the other to “compromise.”
He brings an analogy: Two ships are passing along a river in opposite directions, or two camels on a narrow mountain trail. If they both attempt to pass each other, they will collide and perish.

If one steps aside and lets the other pass, all will be well.

The process of “law” would determine that If one is loaded, and the other not loaded, the one that is not burdened should yield to the burdened. Similarly, if one is closer to their origin, and the other farther, the closer should yield.

The principle of compromise enacts that if the parties are equal in both regards, they must compromise to compensate the other for the right to go first.

It is demonstrated that there are different approaches to adjudication, and for each case the most righteous path must be taken, whether it be strict judgement or compromise.

The greater picture must be looked at, and this context ensures the implementation of actual justice in the whole.

This principle applies to the conflict as a critique of the current policy and talking points of the Israeli government. Anyone who takes a rational assessment of the difference between both the standards of living and the ability of citizens to influence their governments in Israel and the territories under Palestinian control will come to the conclusions that, on the remarkable whole, Israelis have it much better off than our cousins. The load we bear daily, on average, is significantly less than that borne by Palestinians in the territories. This advantage is not just economic, but extends, perhaps more immediately, to freedom of movement and the strength of our armed forces. On this river we are certainly the lighter vessel, no matter how numerous our troubles may be.

In regard to the yielding of the ship being closer to its origin, this condition is met by our experience of being an exiled people returning to its land after 2000 years. We are surely home in our own regard, and our journey is one in the hills of our country. Furthermore, if we truly believe that this land is ours; the cradle of our civilization, the pride of our ancestors, and the inheritance of our children, then we must respect her. We owe a debt to the land itself. It is a long-standing Jewish value, encoded in the Torah, that respect for the land is rendered through the upholding of just conduct within its borders. As it is written,

The assertion of sovereignty necessitates by our people’s historic values that we take responsibility for conflicts and pursue peace and justice within her borders. We must be the ones to axe the heifer, as it were. The Palestinian population, from a mosaic of origins, whether in Arabia, Jordan, or having been descended from the Hebrew population kept in Judea by the Romans after the conquest, are too a part of this home. No historical gerrymandering will change that, and our deeds and outlook as a nation must reflect these realities if we are to move forward.

A frequently recycled talking point offered as explanation, by Israeli politicians and Hasbarists alike, as to why no meaningful progress has been made in changing the status of Judea and Samaria, and the populations existing therein, is that Israel has “no partner for peace.”
By the logic of the above section of Talmud, the rendering of judgement in an impasse does not require a “partner,” and if it did, the partners would have to be truly equal economically, politically, and militarily. Israel, clearly the stronger and better-off force in the region, has a responsibility to take initiative in achieving genuine peace and stability. This deflection to what most in the pro-Israel camp perceive as simply a Palestinian inability to rustle up a spirit to come to the table, is lazy at best and unjust at worst. The fact that we can even demand that Palestinian leadership shows up at the table, or the status-quo will remain, indicates that we are the ones with the real power here.
With the power dynamic weighted heavily in Israel’s favor, and with an understanding that a sense of justice clearly demands that the more maneuverable initiate the process of reconciliation and reform, we must discard the notion that peace will only be possible if the Palestinian leadership comes to the table first.

The assertion of sovereignty necessitates, by our people’s historic values, that we take responsibility for conflicts and pursue peace and justice within her [Israel’s] borders.

If our government is unable to speak to the leadership of the Palestinian Authority, the legitimacy of which is either blatantly not accepted, or held in most cynical regard, by a great deal of Palestinians on the ground anyway, then we have a responsibility to open dialogues with other factions of Palestinian society, not just the leaders of other global or regional powers.
After all, this Authority was externally created, and is to this day backed by foreign aid.
Perhaps those regional leaders who existed before the transplantation of a Palestinian Authority into the land under the Oslo accords will be able to give greater insight into the load upon the neck of their people, and represent the genuine aspirations and grievances of the Palestinians which must be addressed to sustain any progression towards lasting coexistence.

With the power-dynamic weighted heavily in Israel’s favor… we must discard the notion that peace will only be possible if the Palestinian leadership comes to the table first.

With initiative, we have the ability to be creative, and as the status quo of the past 20-25 years has failed to yield any change, with millions still living under a tedious military bureaucracy, the onus falls upon us to explore other options. To remain chained to any solution as the panacea of our collective ailments is to turn a deaf ear to those suffering on both sides under failed policy.

If this land is ours, and we belong to her, then we must take responsibility for the conflicts within her.

If our nation claims to stand for justice, if our people desire justice, then we must pursue it.

About the Author
Yonah ben-Avraham is a Cape Cod-born oleh living in Jerusalem. With history and the ever-progressing story of the Jewish people as his central passion, ben-Avraham is involved in several Israeli grassroots movements focusing on conflict resolution, communal empowerment, and intersectional justice in both activist and educational capacities.
Related Topics
Related Posts
Comments
Advertisement