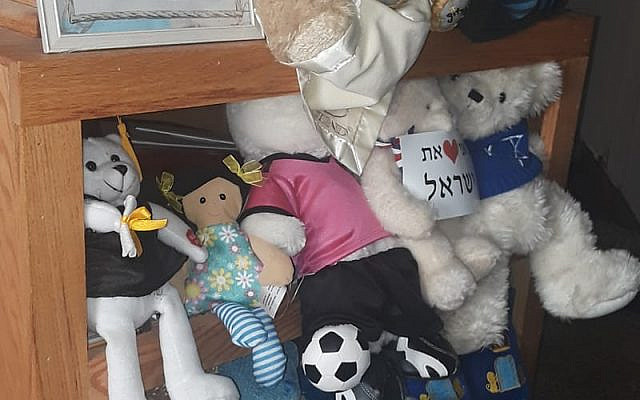 picture taken by Rabbi Claire Ginsburg Goldstein of toys not yet packed for Israel due to Covid 2020.

I assumed that I would be going it alone for a very long time. I did not grow up with the concept that women united can strengthen and empower each and every woman. It seemed that my world was one of competition and “winning”, not sure what “winning” even meant.  I found that if I excelled and shown prowess and vast understanding in my studies, then I would hold a respectable place in someone with an authority’s estimation. But I stood alone.  I was in this race that never ended to get to that top. But what top was that?

It was 2012. I derived much pleasure from leading Shabbat and Rosh Hashanah services at SLC camp where I served as Camp Rabbi. It felt to me that I was reaching people in my own way and I found that satisfactory. But beneath the surface, I felt disconnected from the audience, the congregation that gathered for each service. My Jewish styled teddy bears were my constant source of comfort and comradery. I told myself that I didn’t need people in connections. I could go this alone, as spiritual leader. But could I?

At that time, right after camp ended,  I had amassed close to one thousand teddy bears in my garage. This was not something new. I had been down this road before. But now, I was stuck. There were several people daily knocking on my door or texting me begging to donate their toys. They could not unload them with any of the donation sites. They were hoping that I would take them.

Then I met julie Farkas, leader of the Bergen County JWRP. I felt so grateful. She too wanted to donate her children’s toys that they had outgrown, but she also had a spot for me, if I wanted to take it, on her second Bergen County JWRP trip to Israel that December. I asked her if we could check my assembled stuffed toy collection onto the plane. I had no other way to get the toy collection to Israel. Julie agreed. I was ecstatic. I knew that I couldn’t check in one thousand toys. I would have to ask for help.  I had packed seven duffels. I would need seven people to help me check the bags in. I also had two bags of donated clothes, thanks to the work of Tovah Holzer Reich. Who would check in her bags? Me, ask for help? That was a foreign concept for me. I was still someone who thought that life was meant to go it alone, except for the few guardian angels that I would meet along the way.

But little did I know the “price” I had paid to join in, but in a good way. I would have to let down my halls of isolation that I had used for my survival and protection through the years. Once that I agreed to join the trip, there would be no place to disconnect and recollect myself there. Where could I step or walk away? What a risk, if I was willing to take it.

My gut told me to go forward. I thought of parashat “Lech L’cha”, since Torah was my go to for messaging my soul; risk to grow.

Risk taking? that would mean stepping out of my comfort zone. Could I manage the embarrassment or humiliation if I would make a mistake along the way? Could I forgive myself if I failed? Would anyone else forgive me? What if I flipped my thoughts to consider the opposite. What if I succeeded? What if my new normal changed for the better?

It did and it has. Fast forward to eight years later. I have learned how to let down my guard to some degree and ask for assistance. It has become my new normal. I have learned that there are wonderful women in JWRP/ Jewish Journeys who are more than willing to step up to support my project, Bears from Bergenfield. There are even too many women to count who have stepped forward to help!

I have found a new comfort zone, a Jewish sisterhood. One that I can draw upon for strength and renewal. It is there, when I need it.  I don’t have to go it alone anymore. I am now going it alone, but together.

About the Author
Rabbi Claire conceived of the concept Bears from Bergenfield upon a routine check of the Israeli staff at camp SLC August of 2001. She realized that the world needed to wake up and become aware of the suffering the Israelis were enduring as the Palestinians continued their intifada against them. After 18 years and 195,000 teddy bears amassed and redistributed, Rabbi Claire is searching for more public platforms to proliferate and advance her message, that Jewish lives matter, especially with a teddy bear. Rabbi Claire lives in Bergen County with her husband of 38 years, Larry, and their 4 children, Sam, Shira, Seth, and Sarah Rose, plus their incoming son-in-law Ivan. For further information of how to get involved with this endearing project, contact her at lgcg98@aol.com.
Comments