People around the world continue to pray for a swift and complete recovery for Shimon Peres. We feel profound grief at the prospect of losing the last living founder of the State of Israel and a man who many regard as a grandfather.

Shimon Peres’s life story is entwined with the story of Israel. His family immigrated to pre-state Israel in 1934 and he attended agricultural school before helping found a kibbutz where he worked as a shepherd and dairy farmer.

A protégé of Israel’s first Prime Minister, David Ben-Gurion, Shimon Peres joined Israel’s parliament when the state was just 11 years old and served for 48 years. During his time in office, he was a minister in 12 cabinets and twice served as prime minister, before later being elected president.

In addition to being a father of the Jewish state, Shimon Peres was a father of possibilities. At a time when nobody thought that peace was possible between Israel and its Arab neighbors, he helped negotiate peace with Egypt and with Jordan.

This champion for peace was also a realist who said, “I don’t say that peace is perfect, but we prefer an imperfect peace to a perfect victory or a perfect war.” This belief drove him to become a key architect of the Oslo peace accords and an enduring and outspoken champion for peace with the Palestinians.

I had the honor of meeting President Peres a number of times while working for Israel’s delegation to the United Nations. On one occasion, we gathered at a New York hotel to watch President Peres award Elie Wiesel with the President’s Medal of Distinction, Israel’s highest civilian honor.  Before the proceedings took place, official photographs were taken with the dignitaries in the room.  When they were done, President Peres, looked around the room and generously offered to take photos with every staffer in the room.  One at a time, we stepped forward for a photograph at his side and he gently joked and shared kind words.

Following the ceremony, I watched as the two Nobel laureates walked to a corner of a room and sat together, heads bent in quiet conversation.  The two often spoke of their common desire to inspire peace and tolerance amongst peoples.

About a year later, Israel’s ambassador to the UN, Ron Prosor, was invited to say a few words at a dinner honoring Shimon Peres as his tenure as president drew to a close. As speechwriter for the delegation, I spent weeks thinking about the ideal tribute.  I batted around ideas with colleagues until we arrived at a perfect plan.

In Israel, it is a tradition for young people to follow their national service by spending a few months backpacking in remote locations around the world. President Peres had spent almost seven decades serving the Jewish state and the Jewish people and the least we could do, was offer him the same opportunity. 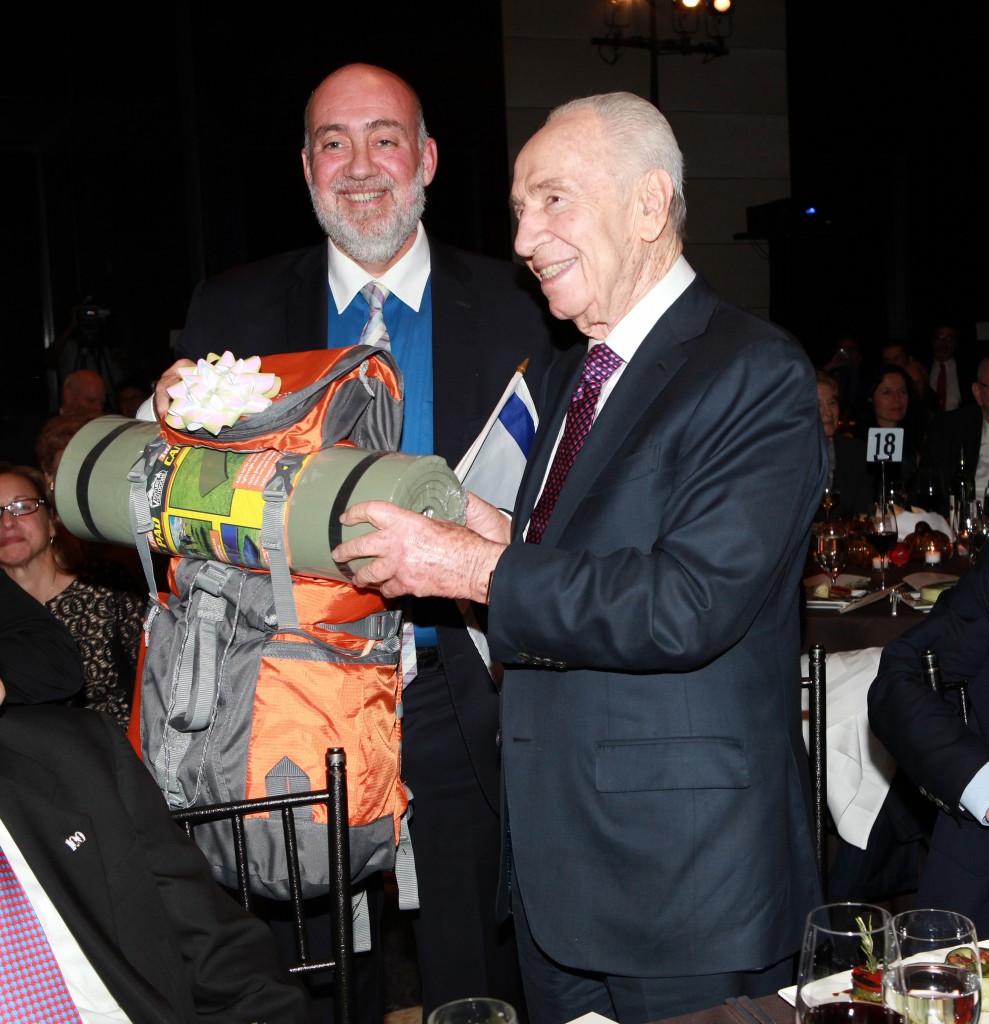 At the dinner, ambassador Prosor addressed the crowded room and President Peres saying, “After 67 years in Israeli public service in which you climbed to amazing heights and reached every peak of accomplishment, it is time for you to do what every other Israeli does when he finishes his national service – backpack through South America!

“On behalf of the Israeli Mission to the United Nations, I would like to present you with this backpack to take with you as you scale new heights – from the mountains of Machu Pichu to the jungles of the Amazon. On your next adventure we wish you derech tzlecha – onwards and upwards.”

Today, as we pray for his swift and complete recovery, I once again wish Shimon Peres derech tzlecha — onwards and upwards – may you never stop inspiring us.

About the Author
Aviva Klompas is a speechwriter, strategist, and public speaker. She currently serves as the Associate Vice President of Strategic Israel Engagement at Combined Jewish Philanthropies. Previously, she served as the Director of Speechwriting at the Permanent Mission of Israel to the United Nations.
Related Topics
Related Posts
Comments