This week, Israelis are celebrating 50 years of Reunification of Jerusalem.

I wish that my heart was in it. I love Jerusalem. It is my home.  The ceremony on Sunday night was spectacular.  The ideal of one peaceful, unified city is my ideal, too.

Every so often, I get glimpses of the dream.

Isaiah described Jerusalem as a House of Prayer for all people. Occasionally, I see the myriads of people of different faiths all heading towards their respective holy sites and there is a moment of exhilaration, feeling that the prophetic vision is being fulfilled. Or I see Zechariah’s image of children and old people in the city’s squares and feel that we are so close.

And then, reality hits.

I acknowledge that I do not really know where Jerusalem starts and finishes. I realize that there are parts of the city into which I never venture. There are people in this city to whom I cannot speak because we have no common language. There are people who are frightened of me or do not trust me or see me as a conqueror. Jerusalem is full of pain and fear and anger and division.

The stones, the earth, the spaces and the structures on them are unified under one ruler. Israel has established its authority over the largest “Jerusalem” ever. The city now includes towns and villages that never before saw themselves as part of Jerusalem.  Geographically, it has expanded in every direction.

Maintaining civil authority over this clumsy landscape is not simple; creating a sense of unification among the people who live in it has proven impossible.

Its population includes the residents of Mea Shearim and Talpiyot, Pisgat Zeev and Shuafat, Gilo and Beit Safafa. We are secular and religious, Jewish, Christian, Muslim and more. (There are those proposing that the city should expand further to include Maalei Adumim. That could potentially include adding a large Bedouin population to the mix.)

In Jewish tradition, Jerusalem is a living being, with feelings. Jerusalem feels pain. She is described as a mother and mourns over her children. First and foremost, Jerusalem is, collectively, the children; it is her people. The city is not united.  Fifty years has not brought us closer. 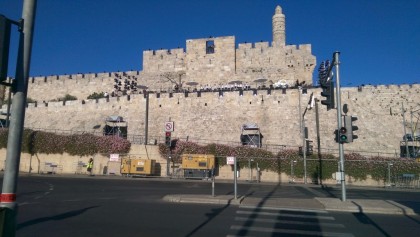 I was very moved by President Reuven Rivlin’s speech on Sunday night. He spoke of cruelly putting a surgeon’s knife into Jerusalem to cut it up. I winced. Should someone want to cut out our city’s heart and prevent me having access to the holy sites in the Old City, I would be incensed. On the other hand, the claim that the current “Jerusalem” cannot be divided and shared more fairly is disingenuous.

We need creativity, imagination and faith.

We CAN, as Israelis, do without those parts of the city into which we do not go, where the people do not speak Hebrew and where it simply does not feel like Israel. We can do without some of the towns and villages swallowed up by the city as it has expanded.

However, restoring Jerusalem to within city borders that previous generations might have recognised is just the preliminary move. We will still have a diverse population with different visions of Jerusalem, different needs from the city and different ways of loving her. How can we be unified in our diversity?

The first step is, paradoxically, so simple that it is too often ignored. We need to acknowledge and celebrate the differences. We need not be frightened of them. We need to know that the more ways in which people love this city, the more loved it is. And the more love here, the closer we are to peace.

We need to exude honour to those who pray in different ways and know that the varieties of worship they bring glorify the Divine Presence. We need to continue to ensure that Jerusalem is a place of pilgrimage for all, because we all benefit by the power of the pilgrims’ faith and prayers and the joy they bring with them, if not by the contribution they make to our economy.

Israel is exemplary in protecting holy places and allowing worshippers of all faiths freedom to pray there. (Ironically, under Israeli rule, we Jews are the ones restricted from praying at our holiest site.) There is a serious question, though, as to whether a civil administration of any sort is the right type of authority for religious sites. This is a vext question for Israel and contributes to the disharmony in our capital.

I do not know what political system is best for Jerusalem. I suspect that the holiest city in the world needs to have a unique form of governance that reflects its unique stature.

I know that presenting the issue as a question of whether Jerusalem can be divided is playing with our emotions.

The solution is not a surgeon’s knife but it might be strong medicine – and with medicine, there might be some unpleasant side effects that are worthwhile for a good result. I just hope that the healers are looking for a complete cure and are not going to continue to suggest that it is either amputation or living with intense pain.

The word “shalom” means “completeness” or “unification.” Let’s not sing and pray for shalom unless we mean to find some way to bring all Jerusalem’s people to a point where we can all focus on the welfare of the mother city above segmented interests and where we can be united in our love for this city.