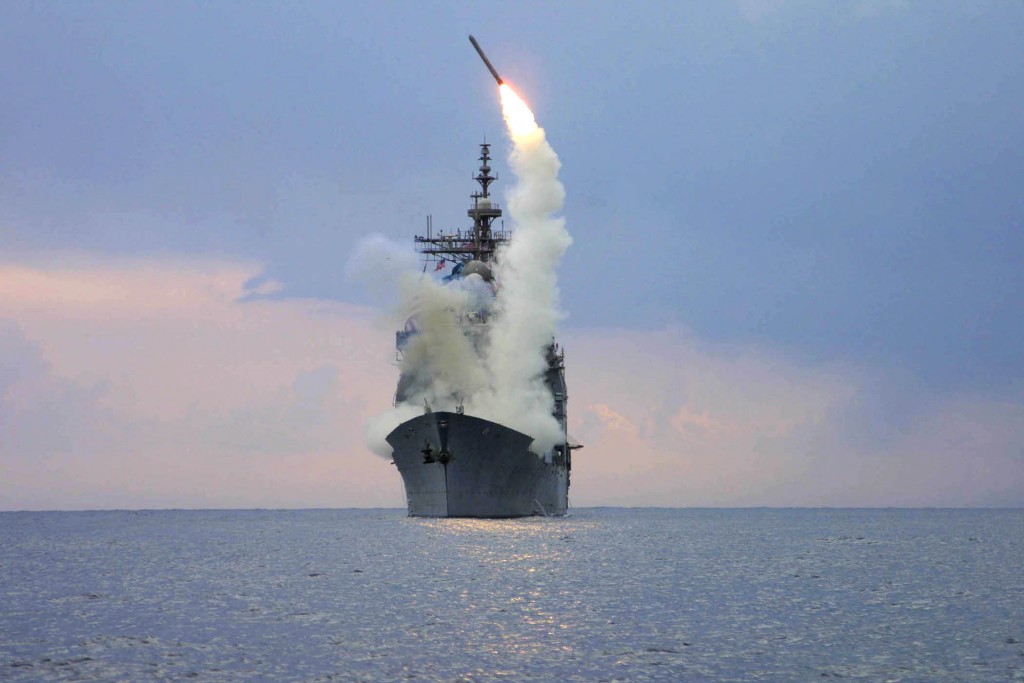 Last Friday, the United States launched a cruise missile attack on a Syrian airfield called Al-Shayrat close to the western Syrian city of Homs. The attack was apparently in response to the use of chemical weapons in Khan Sheikhoun (in Syria’s Idlib province). Fifteen ‘Tomahawk’ cruise missiles were launched from warships ‘USS Ross and USS Porter’ in the eastern Mediterranean, in the early hours of Friday morning. US President Donald Trump claimed that the strike was a direct response to the chemical weapons attack by the Syrian regime which killed more than 70 people. With this, for the first time since the Syrian war has started, the US has become a direct combatant against the Syrian regime. There was an angry response from Russia, which described the missile attack ‘as an act of aggression against a sovereign nation’ and warned that the strikes were a significant blow to the Russian-American relations which were already in a sorry state. A meeting of the UN Security Council was called on Friday evening to discuss the strikes. At the meeting, while France and the United Kingdom described the US response as appropriate, Russia said that the attack was a flagrant violation of international law and an act of aggression.

How does the use of chemical weapons which would turn the international community against Syria help Assad? Why would President Assad use chemical weapons at a time when his forces had already captured Aleppo and were preparing to launch an attack on the Idlib, and especially when the US and Russia were trying to cooperate to fight the Islamic State? Most importantly, why would he attack with chemical weapons when the US has itself admitted that they do not want regime change in Syria?

Clearly, it does not make any sense for President Assad to use chemical weapons when his forces are making a steady progress. Any such dastardly attack would have invited an external response, as it has been the case now. Moreover, he does not benefit from such an attack and only the terrorist and jihadi groups which will be benefitted.

A similar even occurred four years ago in August 2013, when chemical weapons were used in the suburb of Damascus and initially the Syrian Government was blamed for it. But later, after the investigations were over, it was found that the Syrian Government was not behind the chemical weapons attack and it was the jihadi groups which were responsible.
Finally, so far, there has been no investigation into this incident to determine ‘who’ carried out the attack. Therefore, without an investigation, a mere assumption of Assad regime’s involvement in the chemical weapons attack may not be an appropriate response to bomb a ‘sovereign nation’.

Accepting the argument at face value –
If the ‘Sarin’ gas attack in Khan Sheikhoun is not to be considered a ‘false-flag’ operation (as a number of international diplomats have cautioned that this is a ‘false-flag’ attack to draw America into the Syrian war), then the United States must share at least ‘a little’ intelligence-based evidence/inputs to clarify that this was the ‘handiwork’ of Assad regime.

While gazing upon this issue, one should start with the ‘speed’ at which the attack was coming upon Syria. There were consultations with the American allies, and within a couple of days of the alleged attack, a surprise missile attack was launched without investigation. This could not have been possible without ‘assuming’ that a series of calculations were already being pondered upon by the United States to turn the tide of events in Syria into an anti-Assad plot. This also comes at a time when there was a serious criticism in the form of killing of civilians in one of the US operations in Syria and the building up of domestic ‘magma of dissent’ against President Trump in the US. This missile attack is one way of asserting his presidency in the traditional American sense where military muscle flexing becomes political imperative for an ‘active’ US President at the peril of the whole world.

Moral and legal dimensions of the US strike against Syria –
Russian Foreign Minister Sergey Lavrov has said that “the strikes were an act of aggression, on an absolutely made-up pretext”. He says that it reminds him of the situation in 2003 (not 2013), when the United States and Britain along with some of their allies attacked Iraq, saying that it had ‘weapons of mass destruction’ (Find more about the Chilcot Report, 2016). Even the 2013 chemical attack in Syria was not found to be conducted by the Syrian regime. Carla del Ponte, a member of the UN independent Commission of Inquiry on Syria testified had said that it was most likely done by rebels and not by the Syrian army. Therefore, many questions are being raised about this recent chemical attack, being a false-flag operation. If this is a false-flag operation indeed, then the world should take note of US getting involved without a legitimate basis.
Dr Waiel Awwad (of the Syrian Arab News Agency) proclaims that the attack by the United States is clearly a ‘false-flag’ operation in two ways – Firstly, it is aimed to give a lesson to the US President Donald Trump by the ‘American establishment’, who thought that he can behave as an independent President. Secondly, this retaliation has not happened due to the chemical weapons attack, because firing 59 Tomahawk cruise missiles need a prior planning, and it could not have happened in a matter of a couple of days.

Neither the US Congress nor the UNSC authorised the cruise missile attacks on Syria by the United States. Clearly, the US President had no legal sanction to launch 59 deadly Tomahawk missiles against Syria. In terms of international legality, President Trump should have obtained the sanction of UN Security Council which would have come only after a fair and credible investigation into the matter as to ‘who’ was responsible for these attacks. Therefore, this action by the United States is in utter disregard of the international laws and conventions.

Trump’s contravention of his own ‘America-First’ policy –
This could be regarded as the Trump Administration’s first foray into Syria as a direct combatant. President Trump earlier claimed that his vision is strongly guided by ‘America-first’ policy where he is not guided by the business of ‘regime change’ like his predecessors have been doing. He assured that he wants to take care of the American people, rather than routing America as the usual ‘world policeman’. So, what has changed his mind now?

Actually, the ‘America-first’ policy is not picking up due to multiple opposition forces including the ‘deep state’ resentment against it. Being a ‘realist’ President in the matters of international significance, Mr Trump has gained ‘vocal dissent’ within the core elements of his Republican party. Most importantly, President Trump’s fiasco with the Russian affairs as a whole has become such a messy affair that the ‘deep state’ in the United States has started to disturb his domestic as well as international policies. With this one muscular initiative, President Trump has tried to extinguish the fire against him by the dissident voices from such multiple sources, to secure ‘domestic bliss’ for himself.
The ‘deep state’ had struck back at President Trump to the point where he had no option but to reopen the Syrian conflict and put himself in a confrontational mode with Russia.

Future of Russia in the Syrian affairs –
If the statements by the Russian Foreign Office are any indication, it seems that Russia will continue to stand with Syrian Government in the coming days. The statements have confirmed that the Russians are going to strengthen the air defence capabilities of Syria, armed forces and defence of Syria as a whole.

Besides calling the UN Security Council meeting and suspending mutual information exchange pact with the United States, Russia may not have acted adequately on the American missile attacks on Syria. Russian position of standing firmly with President Bashar Al Assad and opposing America’s regime change tactics will ultimately provide Russia with an upper hand in the region. In the recent times, the increasing Russia-Turkey ties among other things have put the United States at a backseat in the region. Therefore, the firing of Tomahawk missiles is clearly a tactic to regain the lost ground in the Syrian affairs. US Secretary of State, Rex Tillerson was already scheduled to visit Moscow for bilateral talks and the US could not have afforded an ‘upper-hand’ of Russia in the Syrian affairs. But it is to be noted that the Americans are not yet capable of changing the situation on the ground as the advances made by the Russian-Syrian nexus is impressive in terms of combating the rebels and the Islamic State terrorists.

Russia has revoked the US-Russia agreement to exchange information about each other’s flights to avoid military accidents in the crowded airspace of Syria. Either this could be a signal that any potential partnership between Russia and the United States to combat cooperatively against the Islamic States terrorists is finished or, this could also be a signal to the US to arrive at the negotiating tables to effectively end the conflict in Syria. Positively enough, the military hotline between the two countries is still operating which is a pragmatic approach to deal with this conflict.

The US plans for Syria –
If regime change in Syria takes place successfully through terrorism and the US support to anti-establishment militia on the ground, then a similar strategy could be used against Iran next and ultimately in Russia.
While answering a question by a journalist, US Secretary of State clarified that ‘regime change’ is the objective of the United States in Syria. This is a radical shift from the position taken by President Trump with respect to the Syrian conflict. Surprisingly enough, this position is also in a complete reversal of the position taken by US Ambassador to the United Nations Nikki Haley, just a week ago. From all the visible spectrum of ‘western’ objectives, the United States may opt for a division and partition of Syria and install a ‘Sunni regime’ in the eastern portion of Syria. This would help in twin objectives of preventing Russian gas pipeline to reach Europe and safeguard the America-led gas pipeline from Qatar to Europe.