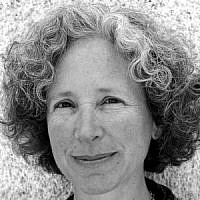 The Blogs
Bonna Devora Haberman
Apply for a Blog
Advertisement
Please note that the posts on The Blogs are contributed by third parties. The opinions, facts and any media content in them are presented solely by the authors, and neither The Times of Israel nor its partners assume any responsibility for them. Please contact us in case of abuse. In case of abuse,
Report this post.

The last time I met Shimon Peres was in 1978 on the Givat Ram campus of Hebrew University when I was a young visiting student on my first sojourn in Israel. He was a younger politician, etched by the trials of the early State, filled with vision and ambition, erudite and inspiring. I was writing my master’s thesis on his “Jordanian Option” – the plan that Peres promoted as the basis for a comprehensive peace agreement for the Palestinians – when his Labor Party lost the elections in 1981 to Menachem Begin. For me, it was a catastrophe. Not only did foreign policy in the region shift away from the prospect of an imminent settlement, but I needed to entirely rewrite my thesis in view of the unlikelihood of the Jordanian Option ever being exercised.

Last week, I had the honor of hearing some of President Shimon Peres’ accumulated insight. Together with former President Bill Clinton, the wisdom of well-seasoned presidents shone bright and offers profound messages to us in Israel, and to humanity.

An older statesperson – we just celebrated his 90th birthday – President Peres has long-range vision. But he does not use it to look backward. He looks into the future, “the future we are all compelled to share.” When he was asked what he considers to be his most important contribution, he quipped, “the one I have yet to make.” Peres says that once we used to live on the land; then we needed to war over territory. Now we live on science. War is simply a waste of blood.

The President’s Conference demonstrated Peres’ commitment to science with an exhibit of Israeli brain research, “State of Mind”. The scientists and their doctoral students stood by their displays, sharing their work with visitors. One keen Beduin doctoral student in bio-medical engineering, Firas Mawase explained to me the collaborative inter-disciplinary project he is pursuing with Jewish, Muslim, and Christian researchers at Ben Gurion University. Based on their study of the elasticity of brain function, they create instruments that stimulate children with cerebral palsy to coordinate their left and right leg movements and learn to walk. Another young woman draped with an Ethiopian shawl had returned from a small village where her team removed cataracts from blind 7 year olds enabling them to see for the first time. With the 10-year life expectancy of a blind Ethiopian child, the surgery gave them the gift of tomorrow. But seeing is a complex process, particularly when delayed for seven years. Based on the team research, the student’s work is to program exercises for the children to learn how to interpret visual input, acquire eye-hand coordination, and learn to function self-sufficiently. The young woman’s eyes were alive with her vision. The research under the direction of Professor Ehud Zohary at Hebrew University’s department of Neurobiology contributes to our understanding of the development of visual capability. Frankly, the young scientists’ passion for human betterment brought tears to my eyes.

We feel that the problems we face today are overwhelming, says Peres. We worry that computers are smarter that we are. We do not respect the balance of health and nature, and so they are taking revenge. Never before did we need to worry about the most basic things – air, water, and food; we worry about storms. We also worry that a small group of sadistic people can destroy us.

Mulling about events unfolding in our region, the president remarks that the public square is stronger than governments. When leaders face our people, there is no point hiding it; leaders cannot solve the problems of our time – the financial crisis or terrorism, for example. Leaders need to agree to be led, to be servants of the people.

The real power in the world is the strength of good people.

“Democracy is not about the right to be equal”, says Peres, “but about the equal right to be different.” America changed and elected Obama; this is the America of difference.

Following that thread, Bill Clinton poses the challenge to push our imagination to expand our definition of community. He says that human history has been a constant battle to define who is “us” and who is “them.” Humanity has continually progressed to expand “us” and shrink “them”.

Rwanda was my mistake, he confesses. I was busy trying to get into Bosnia and save Muslims in Christian Europe while ten percent of the population of Rwanda was wiped out by a genocide in a few months. Rwanda changed his mindset and aim. When he goes to contribute to the re-building, he meets people who understand that it is up to them to stop seeing themselves as victims.

Freedom begins with responsibility, Bill Clinton says. We are compelled to share the future.

We ought to mobilize our hopes, dreams and best impulses rather than fear, anger, disappointment and heartbreak. The barriers are shifting; we must take the limits off our hearts, and see everyone as part of our community. Referring to Edward Wilson’s The Social Conquest of Earth, the creatures who succeed on earth are those who cooperate – ants, bees, termites and people.

The future is what we make. We are in a constant state of becoming.

Turning his experience in Rwanda toward the Israeli-Palestinian conflict, he reiterates an adage he heard from a woman who awakened in a pool of her own blood – her entire family bludgeoned to death around her. She did not curse her life, but sought the reason she had survived. She runs an orphanage, and inspires those around her who lose hope.

We must face the past, let it go, and live toward the future, says the woman.