About two years ago, when the name “Price Tag” started to become a house-hold name, I came across an announcement that Peace Now was organizing  bus tours to the occupied territories. The purpose of those excursions was to educate the public about the effects of this new brand of Israeli terrorism.

Immediately I signed up, I had to see for myself the other side, to check what the map looked in reality. Like many Israelis, I have never even been to Ariel, (the only Israeli city across the green line) and it is only 30 minutes drive from Tel Aviv.

The tour’s destination was the area which was hit most by settlers’ terrorism. We visited the Palestinian village of Kousra where, at that time, ten settlers from a nearby settlement were caught after they had come to vandalize the village

Then we drove up to the next hill to see the place where the settlers came from. On the way up we saw a group of young people with small children engaged in some educational activity. They seemed peaceful and devoted to their children. It was hard to imagine that the 10 terrorists who went attacking their neighbors could be part of that group, and I wondered what kind of example these religious parents set for the next generation.

Our Peace Now guide showed us evidence of the settlers’ violence, we saw their signature on the walls, and the ruined olive trees. Still, in spite of the gravity of the actions, he kept reminding us that most settlers were not terrorists. This even-tempered way of speaking is typical to the discourse of the Peace Now movement.

Two years ago our guide also told us that although the identity of the criminals was known to the police, they were not brought to justice.

At that time the settlers’ “Price Tag”  terrorism focused mainly on destroying the property of their Palestinian neighbors. They especially liked to destroy symbols like olive trees, which stand for stability and strength for both Palestinians and Israelis. But now we know that this was only the beginning:  it should have been a wake up call for Israeli society. Unfortunately, only few took notice and they were not in any position to do anything, still they protested and organized bus tours

Today, encouraged and still unpunished, the terrorists have become much bolder. They branch out attack newer targets, and desecrate holy places of other religions. Only last night we heard the horrible news that terrorists had torched the historical church in Tabgha.

The  Holy Land used to pride itself on being a place where people of all religions could live safely and practice their belief without fear, it is no longer true. For too long, blindness and deafness about our own people has prevented Israeli society from recognizing and condemning prejudice, intolerance, racism and even hate crimes.

It is almost too late but we must bring back sanity. So, metaphorically speaking, before  we  start lynching every leftist speaker, who dares to speak his/her mind, it is time to take care of the real culprits.  Israeli terrorists, and those who stand behind them, should be  punished severely and treated at least as harshly as their Palestinians counterparts.

We cannot stand by and let those criminals take away our country and our future, if nothing else, we owe it to the next generation. 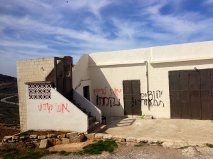