The Blogs
Haim Shweky
Apply for a Blog
Please note that the posts on The Blogs are contributed by third parties. The opinions, facts and any media content in them are presented solely by the authors, and neither The Times of Israel nor its partners assume any responsibility for them. Please contact us in case of abuse. In case of abuse,
Report this post. 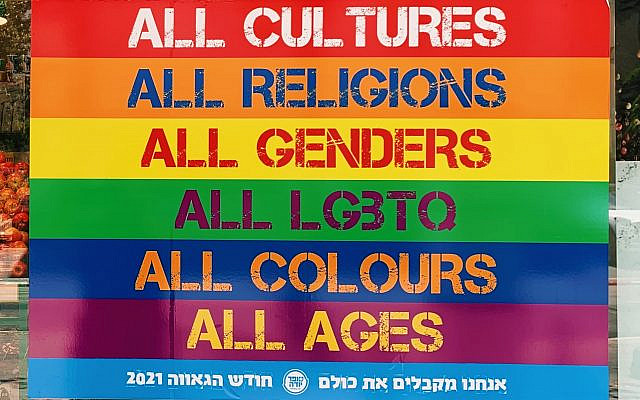 This blog accepts all cultures, all religions, all genders, all LGBTQ, all colours, all ages.

Just such a message of universal receptivity can be seen polishing the windowpanes of Tel Aviv in recognition of Pride, as Western capitals break out into all manner of badges and banners and broadsides and flags. I nearly believed that, entering my local supermarket, (which Israelis call by the wrong compound, i.e. “the super”), I would be greeted by shouts of huzza! and a popping of streamers, doused in a cataract of confetti and glitter, before the staff broke out into a jolly tune and a choreographed number. I stood outside the sliding doors wondering just how best to convey the sad fact that, alas, my amorous attentions were reserved exclusively for the fairer half of our species.

However, if I were an L or a G or a B or a T or a Q (though I am F, A and B, to be sure), I should consider all these commercial exhibitions of social parity a bit mankey. Who are you, anyway, to affirm me in my sexual nature? All this is a bit intimate for a national greengrocer. Query (so to speak): Why do you assume it takes the side of a large building to make me feel welcome and comfortable? It offends my mental maturity. And why the need to ensure the peckish public against between-the-aisle molestation? Should we have reason to suspect otherwise? It presupposes that the general social atmosphere is one of unwelcome, as if to say, don’t worry, it’s safe here, you’re among allies. “We serve your type” is belittling and infantilizing in 2021 as “We don’t serve your type” was brutish and soulless in 1921. I never for a moment suspected that you didn’t.

In the gay “community,” this supercilious congratulating is referred to as the “We’re-so-proud-of-you effect”: a sort of  good-for-you-ness mentality which can be glimpsed in such phrasings as “We Proudly Serve the X Community,” “You Are Not Alone,” and “We Love You.” Don’t expect as gushy a reply.

Much of this, make no mistake, is well-meaning “sensitivity”. But the sensitive, especially in its over- form, shares something with the insensitive. Both fail to take into account a person’s humanity: the one by paying little regard to another’s feelings; the other by making feelings, and little else, its obsessive concern. Neither treat their subjects as autonomous, self-propelled human beings.

What this really amounts to is mane-petting and chin-rubbing. It bends graciously down and tenders a multicoloured biscuit. Are gays expected to wag tail and lick hand in appreciation? No one adult believes in the earnestness of such language. It speaks not for the oppressed everywhere. No banner of freedom does it defiantly raise. It is there only to exult in its own righteousness.

The proper reaction to all this corporate garishness and garrulity would be a vivacious rant in the following vein:

“Sorry, but my sexuality and colour shan’t be commercially exploited for profit. And would we have reason to assume your establishment discriminates on the basis of religion or colour or gender or—O, come now—age? Speaking of age, I’m an adult and a customer, and I suggest you start treating me like both. Now hand me those gluten-free cookies and I’ll be on my merry way.”

We accept all cultures, religions, genders, LGBTQ, colours, and ages…which I suppose is one way of saying everyone. Nevertheless, to reinforce the obvious, at the end of this vertiginous checklist was added the unambiguous, “We Accept Everyone.” (Everyone everyone? I can easily think of quite a few figures of sordidness—promulgators of certain objectionable creeds, for instance—whom I would rather reject than not from the circle of catholic embrace.)

Despite its moral flexing, this is not very muscular stuff. If such a display of universal brotherhood were showcased, say, in a German storefront window in the summer of 33’ (a reportedly hellishly torrid year), or 1979 Czechoslovakia, or 1921 Tulsa, it would deserve the moral exceptionalism that such a smug and complacent statement seems to think itself deserving. Feel free to hand pump what makes your chest thump. But don’t think you’re doing something brave by putting up a pro-LGBTQ poster in places where being straight has become démodé.

Photo by Jason Leung on Unsplash

I hope none of this palare comes or rubs off as what it is surely not, an anti-fun, ramrod-conservative screed. (*I hear there is a ‘heterosexual pride’ flag, very unstylishly done in black and white. (Leave it to straights to be so drab). You may think there were little colours left to choose from, but black and white incidentally make for grey—a colour which represents perfectly the brackishness of  so muddled an idea, and the dirty politics behind so ashen a flag.) I’m a decade long Tel Avivian, and one can’t reside in this city without absorbing and encompassing some of its libertine ethos. I’m damned proud to live in a place where people different from myself can be themselves, because that ensures that I, being different from them, can be me. Happiness, whatever form it takes , is yours to pursue, so long as that pursuit doesn’t infringe upon another’s, and I will join any march in the name of that right. Especially whenever a government or a bastard seeks to undermine it. I’m pro anything that isn’t coercive or destructive to third parties—the libertarian’s credo. But when the businesses I patron begin patronizing me and my friends, I must call it what it is to its eek: political posturing. Not very boda to vada.

None of us, however, are wholly free from immature thinking about others with lifestyles foreign to our own (how many times during the writing of this article has the word ‘stunning,’ ‘fierce’ or ‘fabulous’ embarrassingly suggested itself for employment by chest-flashing for attention in my mind?) But when we address a gay man, we should try addressing the man. We don’t meet an LBGTQ, we meet Michael, or Sarah. We don’t shake hands with an orientation. We introduce to a person, each of whom is an irreproducible amalgamation of factors literally innumerable, whose whole is more unique than his parts. When we address one, we should address one.

In Tel Aviv (of Pride host cities, the pridest) there is a saying, Siba LeMesibah. Literally, ‘reason to party’; to keep with the wordplay, ‘excuse to let loose.’ (You may imagine how often this phrase is resorted to in the clock-round “White Night City”). Ultimately, after all the deep-throaty claims of increased visibility and representation, Pride serves just that reason—to party. Which is great for all parties concerned, as well as all parties unconcerned. For gays, they get a full-dress (more often, undressed) parade in their honour, with gobs of flattering attention that any true Queen would consider no less than due royal tender. Fantabulosa. For the rest of us libidinous bores, we get to march in a promiscuous parade alongside young hetero hoydens in the name of sexual liberality. Hoist the flag.

That the rainbow arches wide over the city should make LGBTQs encompass the old as well as the modern sense of the word gay. But that businesses insist on urging in large boldface print for the ogles of all that they accept everyone, no matter who, all the time, no matter what, is a tad insincere, a wee superficial, and a bit much. It presupposes the world outside its cool, sanitized halls to burn with racism and homophobia. Vada bona: We are past the regretful days when a charpering omi would shake up an omipalone just by the look of his batts. A strong-numbered parade demonstrates to the puritanical and the totalitarian and the regressive and the marjoys of the world that we will not go back to such times.

The idea is to show that LGBTQ does not in fact occupy some inferior space, or some aberrant position, but is justly to be accorded the same treatment as the rest of us. Which treatment, represented visually, would be a shrug.

‘Live and Let Live’ means you do you, I do me. Not you do me and I do you and x does ze (y not) and everyone does everyone else. “I don’t care,” when it comes to other people’s private business, is about the most genuinely liberal view one can adopt.

The true way to treat others equally is to treat them not as if they were a special case, or requiring of special care, or special attention, or were especially precious. If we really desire to show a right and equal treatment of the non-hetero community, we ought to deal with them straight. ♥

About the Author
American by birth; Israeli by birthright. Jerusalemite by residence. By the year, enough of them. Haim, namely.
Related Topics
Related Posts
Comments
Advertisement