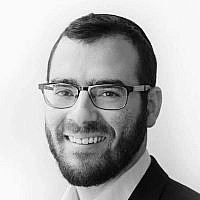 The Blogs
Gedalia Guttentag
Apply for a Blog
Advertisement
Please note that the posts on The Blogs are contributed by third parties. The opinions, facts and any media content in them are presented solely by the authors, and neither The Times of Israel nor its partners assume any responsibility for them. Please contact us in case of abuse. In case of abuse,
Report this post.

For the next two weeks, the Knesset will be a war zone. The dogfighting between coalition and opposition that has characterized Naftali Bennett’s term in office so far, will be child’s play to the scorched-earth tactics the Netanyahu-led bloc will employ to prevent the passing of the budget.

But in all likelihood, November 14th — the date by which failure to pass the budget triggers new elections — will see Bennett’s government pass its hardest test.

And at that point, the PM may want to pick up the phone to say sorry.

Not to his voters for breaking a shopping-list of campaign promises. Bennett’s ideological flexibility ought to qualify him for Israel’s gymnastic team at the Paris Olympics in 2024. But Israel’s freshman leader obviously doesn’t believe that forming an alliance with far-left and Islamist parties is a breach of a campaign vow not to form that very government.

Rather, Bennett should beg pardon for promoting one of the ugliest canards in Israeli political life: that the Haredim are unprincipled money-grubbers, willing to sell out their values to maintain the flow of shekels.

The allegation has long been a staple of public discourse. But it’s the current prime minister who most recently put it on the record.

And it’s once again Bennett who has turned that unsavory charge into a political strategy. “Once Bibi’s out of office with the help of the Arab parties,” Bennett’s strategists told him, “the Haredim will be forced to join the coalition to secure their funding – even at the expense of ideology.”

That’s why the upcoming budget is so significant. Because it contains painful cuts to the Haredi world: both to yeshiva budgets and to childcare support for working wives of yeshiva students.

Yet despite ceaseless attempts to entice the Haredi parties with their 17 seats to abandon the Likud-bloc and enter the coalition, the Haredim have stayed resolutely in opposition.

The reason is simple: because the current government’s raison-d’etre is an all-out assault on the chief rabbinate and the country’s status quo on kashrut, Shabbat transport, plus conversion and marriage.

Haredi resolution should come as no surprise to Israelis; for those who care to listen, Haredi politicians are open about their priorities.

“Our main priority is the Jewish future of the state,” Michael Malkieli, an MK from the Shas party told me. “Budgets for our institutions are important, but secondary. So there’s no way we’re going to join the coalition.”

In the last days of the Netanyahu government, and with the specter of financial pain from the Bennett-Lapid coalition looming, another Haredi politician took the same approach.

“Rav Shach [former leader of the non-hasidic haredi world] instructed the Degel HaTorah party 30 years ago to go with the Israeli right because of its greater identification with Torah life,” MK Yitzchak Pindrus told me. “Ideology comes before money – we simply can’t be part of a government headed by those whose agenda is anti-Judaism, no matter the financial state of our institutions.”

The irony is that as the only sector whose educational funding is outside the regular state budget – instead mostly covered by “coalition funds” secured by being in government – the ultra-Orthodox ought to be forgiven for flexibility to secure funding.

But that isn’t the case. Instead, Haredi politicians expend political capital to protect Israel’s religious status quo even though it has no bearing on their voters.

Haredim will continue to eat kosher, marry and divorce according to Jewish law regardless of the fate of the country’s religious laws. But many traditional Israelis would struggle to do so. A free-market in marriage and conversion would mean thousands of Jewish lives ruined as children face insurmountable halachic problems inflicted by their parents.

In purely political terms, the Haredi insistence on preserving Israel’s religion-state status quo is an own-goal, that rebounds on efforts to secure educational funding. Yet it’s a price that the Haredi public willingly pays for a core value, which is protecting the Jewish character of the Jewish state.

So assuming that Israel’s new government survives the upcoming budget warfare and gets down to the business of dismantling the country’s religious status quo, there’ll be plenty more financial pain. For however long this strange left-right government lasts, Haredi families will have to fear the next swinging cut.

But the old saw that Haredim are ready to sell their values for some shekels, will prove about as accurate as a Naftali Bennett electoral promise.

About the Author
Gedalia Guttentag is an editor at Mishpacha Magazine, a global Orthodox weekly (https://mishpacha.com/contributors/gedalia-guttentag/). He studied for more than a decade at the Mir yeshiva, Jerusalem, and is active in Jewish education.
Comments