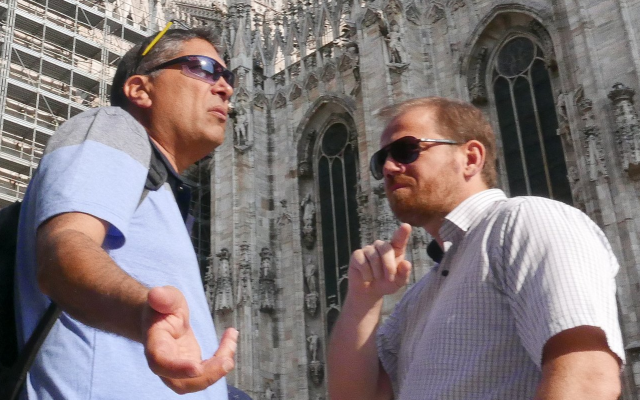 The political left everywhere is hobbled these days by woolly lack of ruthlessness. It seems to stem from a strain of overconfidence amazingly resistant to repeated abject failure. Events to come in 2020 will be crucial to any hopes of turning this around, and they will be bookended by the March election in Israel and November’s voting in the United States.

An excess of decorum can prevent the left from peddling lies, and that’s a handicap that can with skill be overcome. More damaging is its aversion to the brand of full-on, hell-bent dirty trickery that was perfected by the right and deployed with around the world with great success. This trickery triumphs because of a certain kind of cynicism among voters that degrades all sides but also self-fulfills. And while I cannot advocate monkey business as such, I do say that the left could benefit greatly from learning this level of tenacity.

Humans seem to require a struggle to be content with their affairs and efficient in their advancement. This struggle tends to the binary, but since matters are complex it also shifts and realigns. Globalization and technology have scrambled the landscape, but the struggle in the developed world is presently settling down into one between a liberal left (including educated, secular and wealthy former conservatives) and a populist right (including rural, traditional and religious ex-leftists). (In Israel the left has become the “center-left,” and while there is a distinction between its components the binary model still holds and is often oversimplified as “Yes Bibi, No Bibi.”)

The liberal left generally has most of the intellectuals on its side. While this group is clever they can be too clever by half, and they’re rarely eager for a knock-down fight. Liberals believe in goodness, and even more strangely they believe in the supremacy of reason. The collapse of communism misled them into assumptions about the right side of history as well. They think it’s obvious that dictatorship of the majority is not liberal democracy, and that the people want liberal democracy.

None of this is obvious. People want many things to make life more pleasant in their jungle, but even committed liberal democrats want certain things more than liberal democracy. Some people seek progress unimpeded while others care about the consequences (should we let artificial intelligence kill every job to the point that computers are programming themselves)? Some insist on Cartesian rationality at all cost (even if we’re all depressed) while others find solace in religion (even if it’s a fable). Who can say what’s right and wrong?

The populist right knows the educated and wealthy are generally not on its side. The educated and wealthy often get their way, but are rarely in the majority – which is why the populist right increasingly does favor a version of dictatorship of the majority. And so it sanctifies majorities (unless they’re Hilary Clinton’s), underrates education, and incites against unelected courts (by the way: who’s to say that murder is wrong if a majority says it’s right?). The right does not underestimate the “elites,” and so it is and must be ruthless.

In America, such ruthlessness drives the Republicans to unapologetically “redistrict” to gain overrepresentation, to suppress minority voting, to make sordid alliances, to discard once-cherished norms, and to stick together no matter what. This is why in 2016 they refused to even hold hearings for Barack Obama’s qualified and centrist Supreme Court nominee (which had never been done). The Democrats are too polite to effectively condemn the rascalry, and hence arc of opinion gradually bends slowly toward the base. We shall see what happens by November.

In Britain, such ruthlessness enabled the Brexit cabal to flood the zone with lies about the economy and misdirection about Muslim immigration coming from the European Union. In the recent election the Brexit Party needed to step aside for the Tories to win and so it did – while the Lib Dems and Labour squabbled among themselves and predictably got crushed. Britain’s rationals were too polite to demand the obviously justified referendum on the negotiated Brexit deal be held, and now the calamity will actually occur quite soon.

All of this has striking parallels in Israel. So in light of the failure by the left to win an election in 20 years, the urgent need to turn it around, and the opportunity created by a hobbled Benjamin Netanyahu and a plausible alternative in Benny Gantz, I offer an outline for what focused ruthlessness might look like (by way of full disclosure: I have in the past advised similar to the Blue and White party itself):

Turnout, not turncoats: Israelis tend to seek improved performance in taking votes from the other side, so the left makes centrist appeals to supposedly wavering Likudniks. This makes a certain sense, but offending your own base can wipe out any meager gains. Only 70% of Jewish Israelis have voted in recent decades and most of the absenteeism is on the left. The base of the left hates the Likud and is dejected by triangulation; give them, therefore, a reason to vote. It is striking that not even the presence of three military chiefs in the opposition party could attract Likudniks in serious numbers. The right lost about 7 seats’ worth of vote share from first vote April to the do-over in September not because of Likud turncoats but because fewer Likudniks and more Arabs voted.

So stop fretting about the Arabs: To get your majority you need them; there is no other way, so stop apologizing (Netanyahu wouldn’t). In September the turnout among Israeli Arabs was 60% and if it in March equals that of the Jews that would be worth two more seats for your bloc. To bring this about the Arabs must feel a real stake, so talk to them and talk nicely. Yes, there is a problem with depending on the Israeli Arabs in a war with other Arabs. Ignore it. Finesse it for the health of society, which is no less important. And once you have your majority with the Arabs, assorted other Jews will come.

Unite the splitters on your side: Meretz and Labour cannot be allowed to run separately and run a serious risk of either or both not passing the 3.5% electoral threshold and thus handing this critical election to the right. Netanyahu would have been all over it by now. Bash their heads together. Promise what you must. They should either unite – or Labour go with Blue and White and Meretz with the Arabs. No one should tell any pollster they will vote for these two parties, to keep their egos and their ambitions well in check.

Speak clearly: Don’t recoil from conflict where it reflects truth. Disdain is justified with Netanyahu’s defenders who argue the law says a prime minister must serve throughout a trial (which doltish radio interviewers let them get away with); the law enables but does not require it and decency renders the entire idea absurd. And stop begging for a unity government with a post-Netanyahu Likud. The party is as much a problem as he is. Well before Netanyahu, its suicidal West Bank settlements project was dragging Israel into a situation in which partition is impossible, Arabs are half the country, most of them are not citizens and increasing numbers of Haredim are unemployable and depending on handouts. Now it has brought Israel to the very brink of this abyss. This whole gang, including “challenger” Gideon Saar, deserves the door, and fast.

The religious aren’t with you until you win: Courting them is a fool’s errand. They will never give you power until you have it; they will never join you if you don’t have a majority without them (which can only happen with the Arabs, and in March very might actually might). Since 1977 there is no precedent to this, but there is plenty of precedent to them joining the left on the cheap once they have no choice (1992, 1999 and in a way 2006).

Make distinctive and credible promises: With guns blazing, promise important things that you can deliver, which many on all sides want, and that the right cannot possibly promote. Mostly this means religion and state: public transport and commerce on the Sabbath, civil weddings and easier conversions. The religious objections can be politely ignored; they would never make such outrageous demands in Antwerp or Brooklyn. Moreover, the state should use legitimate leverage to compel a core curriculum of math, science and English in Haredi schools and national service for those refusing the army (after causing conflicts by voting for the right, in one of history’s greatest hypocrisies). The Draft Law is not necessarily the way to go here, by the way: sure, certain politicians are committed to it and the double standard of religious draft exemptions is an outrage, but many people don’t want the army becoming more religious and the whole thing is a headache.

Above all, dear leftists, don’t be too timid to offend. The right, as we can see, would never make such schoolboy errors.