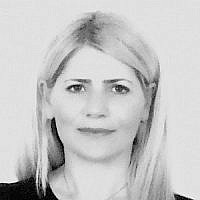 The Blogs
Solin Hacador
Apply for a Blog
Please note that the posts on The Blogs are contributed by third parties. The opinions, facts and any media content in them are presented solely by the authors, and neither The Times of Israel nor its partners assume any responsibility for them. Please contact us in case of abuse. In case of abuse,
Report this post.

While a coalition of nations has come together to respond to ISIS’s barbaric war in Iraq, Kurdish Autonomous Region, and Syria, Turkey used Abdullah Ocalan (Ocalan has been serving life imprisonment in Turkey since February 1999), the leader of the PKK to accuse Israel for forming ISIS or IS.

Turkish and Kurdish media outlets recently published many declarations of Abdullah Ocalan who accuses Israel for forming ISIS/IS. Ocalan, stated that Israel wants to control Kurdish lands and oil and provokes terrorist attacks deliberately.  He claims that the only solution for the protection of the Jewish State is to create an enemy near its borders.

Obviously, it is very provocative and this provocation does not help the global struggle towards ISIS/IS or Kurdish issue but helps Turkish authorities. It seems Ocalan does not pay attention to what it would come next. It is pity that Ocalan cannot analyze the issue from wider perspective or cannot see the bigger picture of supports provided by Israel to Kurdish nation!  I have to admit that the provocation statement make us think the reason behind it. For sure, Turkish MIT (Turkish Intelligence Agency) is alerted by the former president of Israel, Shimon Peres’s declaration regarding Turkey and Qatar’s support for ISIS which he stated, ‘the use of tough economic sanctions against Qatar and Turkey to punish them for financing terror’.

We are all aware of recent media outlets regarding Turkish authorities’ collaboration with jihadist terrorists. Turkish President, Recep Tayyip Erdogan has allowed jihadists to receive medical treatment, training in Incirlik Adana and that he has kept Turkey’s 885 km Syrian border open to the jihadists, including ISIS, providing them a safe haven over the last three years, along with logistic support.

As a result of jihadists free movement we witness crimes organized by jihadist related people towards humanity such as; massacres, kidnapping, beheading, sex slavery and cases of brainwashing with total mind control in a cult in Iraq, Kurdish Autonomous Region and Syria.

It is clear that the Turkish President and his administration want to justify their collaboration with jihadists and apply to all tools to get rid of Turkey’s internationally damaged image. In this sense, Turkish or Islamic related medias are an easy path to use in order to damage the image of Israel. The reference given by them is the declaration made by the former employee at US National Security Agency (NSA), Edward Snowden,  who claimed that the British, the American and the Mossad intelligence worked together to create the Islamic State of Iraq and Syria (ISIS).

Obviously, Turkish AK Party (Justice and development Party), supports Palestine and tries its best to damage the power of Israel in Middle East. However, it is unacceptable for any Kurd to participate in Turkish authorities tricks towards Israel.  We all know that the idea is ridiculous for any Kurdish to be influenced by Turkish MIT or Turkish AK Party and stand by Recep Tayyip Erdogan.

What is important here is the global peace. ISIS must be defeated because it poses a threat to Europe, to the US and to the world. In truth, the main threat is to Kurdish people and non-Muslim people in Iraq, Kurdish Autonomous Region and Syria. They are already bearing the brunt of ISIS brutality and remain at gravest risk in the unfolding genocide.

It is advised that any state has an obligation to bear counter-measures by other states if the former provides a safe haven for terrorist non-state actors.  According to the fundamental principle of international law, a state must not knowingly allow anyone to use its territory in a way that might endanger the rights and security of other states.

Moreover, countries and their administrations those provide jihadist terrorists with any support are guiltier than active terrorists. However, it is totally a decision of those countries whether they want to stand for or against  global peace but they are all under obligation to obey the law.

The law is clear and it stands for all. For example, Resolution 1373 which was adopted under Chapter VII of the Charter of the United Nations; applies to all states regardless whether they have ratified the Financing Convention. The Security Council also “established a monitoring mechanism, the Counter-Terrorism Committee (CTC), to oversee the implementation of Resolution 1373.”

Finally, I would like to state that the history of terrorism has been existed since 2000 years but currently it becomes both domestic and international threat. Denial of history, systemic persecution and blacklisting Israel are now being used by Turkish AK Party to criminalize Kurdish people and their allies. Enemies of global peace and Kurdish nation in general will use any tricks to prevent Kurdish freedom. If we adopt the rule of law, democracy, protection of human rights and global peace, we should get more united and do not pay attention to what Ocalan claims towards Israel but we should be very conscious towards Turkish AK Party or any other Islamist extremist groups’ new tricks. Here, I proudly would like to state that Jewish community and Israel friendship are sincerely appreciated by Kurdish nation.

About the Author
Solin Hacador is from capital city of Kurdistan. She specialized in international commercial law and human rights law. She is currently working as an academician and business investment adviser in Barcelona, Spain.
Comments