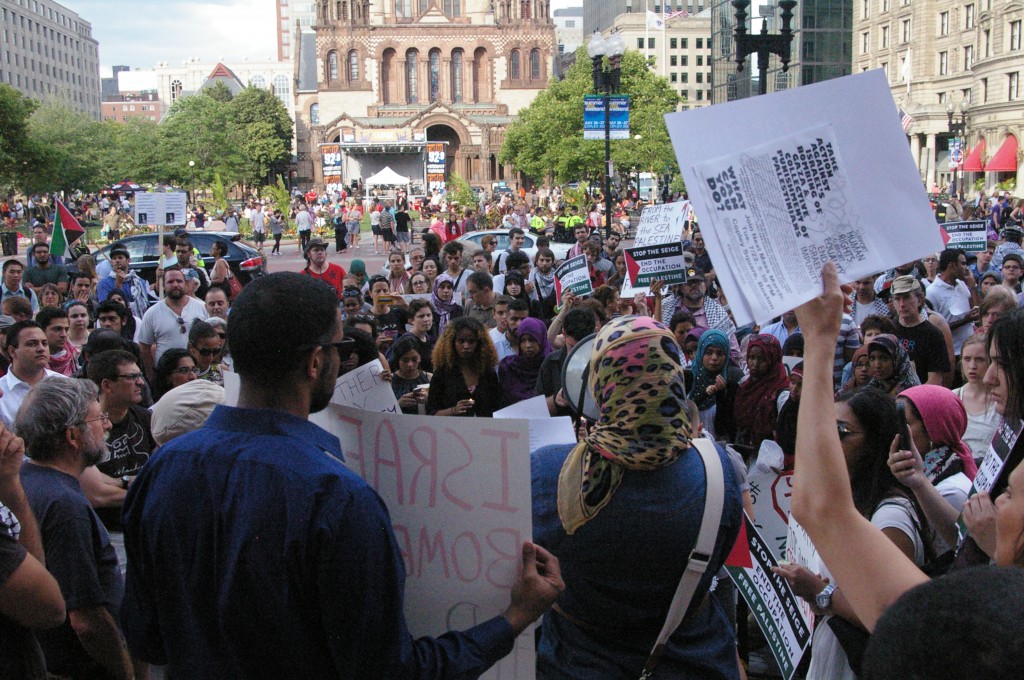 Between 170 and 200 people attended an anti-Israel rally organized by Jewish Voice for Peace on July 17, 2014. The rally took place at Copley Square in downtown Boston.

That was a chant heard at a rally that took place in Copley Square in Boston on Thursday July 17, 2014.

The chant which has been used to promote violence against Israel for more than a decade, was shouted within earshot of where of two young men, Dzhokhar and Tamerlan Tsarnaev, allegedly placed two pressure cooker bombs near the finish line of the Boston Marathon on April 15, 2013 and killed three people and injured 264 others. 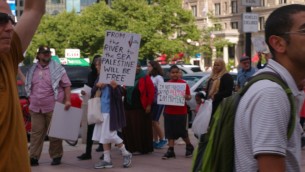 The rally was covered by a number of local news outlets including the Boston Globe, the Boston Herald and the local NPR station. The Herald’s coverage, framed the event it as a peace rally, missing a lot of the explicit hostility toward Israel displayed at the rally.

“Freedom from violence in the Gaza Strip. That’s what pro-Palestinian protesters call for at the Boston for Gaza Rally on Copley Square,” wrote reporter Prisca Pointdujour. “Protesters launched and lit candles as Israel launched a ground invasion into Gaza.”

They did a lot more than light candles. In addition to calling for promoting an intifada, they chanted “From the river to the sea, Palestine will be free” (a call for the destruction of Israel), and “Israel, Israel, you can’t hide! We charge you with genocide.”

The rally, which attracted by approximately 170 protesters soon after it began at 5 p.m. and probably had 200 attendees by the time it ended, was organized in part by Jewish Voice for Peace. 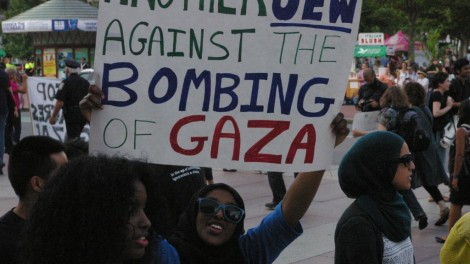 A protester at a rally organized by Jewish Voice for Peace. (Photo: Dexter Van Zile)

Events like this could set the stage for anti-Israel (and anti-Jewish) hostility on college and university campuses this fall. When students come back to school, they will be confronted with a hard-core group of activists who have spent the summer demonizing Israel.

William Jacobson, a law professor at Cornell, worries that violence will erupt at college campuses this fall as a result of what we are seeing at rallies during the summer. He made the prediction at the blog, Legal Insurrection. “Merely unhinged BDS on campus will be the good old days,” he writes. That’s my prediction.”