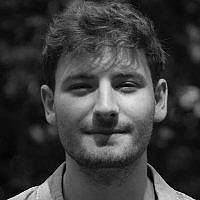 A demonstrator raises her arms and stands a few feet away from police officers during a chaotic night in Boston, which saw a peaceful protest turn into scenes of tear gas and rubber bullets. (Jake Epstein)

Tear gas. Pepper spray. Mace. Firecrackers. Flash bangs. Rubber bullets. These were some of the sights and sounds I witnessed as I documented clashes between demonstrators and police in Boston late on Sunday, May 31.

What began as a peaceful protest — centering on the Black Lives Matter movement, George Floyd’s murder and anti-police brutality — turned violent as tensions between police and civilians mounted as the sun went down.

Holding my camera in the air and navigating my way to the front of a stalemate between police and demonstrators, there suddenly was chaos and screaming — gas in the air and water in my eyes. The next three hours were filled with intense and dramatic, brutality and high emotions.

By the end of the night, I no longer recognized Boston — my backyard. I had witnessed looting, vandalism and destruction. I saw police fire off rubber bullets and throw tear gas canisters to push demonstrators back. I saw people throw water bottles and rocks right back.

The death of George Floyd, captured on video, has sparked massive attention and outcry across the United States, and has gained plenty of international attention over social media and the news. All the chaos, violence, brutality and destruction in major US cities also comes during a global pandemic — where physical distancing had long been recommended and gathering in large groups was frowned upon.

On June 1, when Boston Mayor Marty Walsh was asked why the protest was allowed to happen during a pandemic, he had one thing to say.

“We believe in free speech.”

At first, I was confused. At one point during the night, an armored police car posted up at a major intersection, where cops had formed a line, threatening people to leave because they were “unlawfully protesting,” or else more tear gas would be deployed.

At this moment, a group of demonstrators had formed a peaceful group a few meters away from the police formation. They chanted “Take a knee,” and two cops did just that. I witnessed a dialogue occur between the two cops — in full riot gear — and the demonstrators.

No one was hurt, and they shook hands after. It was surreal.

All day I’ve been thinking about the concept of free speech and protesting during the pandemic. In Israel on Monday, thousands rallied in Tel Aviv against violence towards women. Just like with what’s happening in the US, Israelis were demanding their government to enact change.

Protesting during the pandemic has been seen in cities beyond in the US and Tel Aviv. We’ve long been seeing protests for autonomy in Hong Kong. Within the last few days, we’ve seen Black Lives Matter protests in London, Amsterdam, Berlin, Copenhagen, Paris, Dublin, Krakow, Milan, Perth, Auckland, Rio de Janeiro, Mexico City and Toronto.

Across the world, people are standing up for what they believe in. They’re advocating for human rights and justice, and a lot of these demonstrations have been conducted in a peaceful manner — despite many also seeing varying severity of violence.

While the coronavirus has dominated the news cycle for almost the entirety of 2020, protesting seems to have replaced it as the current global theme.

Mayor Walsh’s remarks about free speech have carried significant weight in my head, but nothing more than what they are at face value.

We, as humans, believe in free speech.

Here we are, during a global health emergency, which is causing complications in nearly every single aspect of our day-to-day lives — and people are gathering en masse, speaking up about injustice.

There is so much pain and suffering going on in the U.S. right now. But watching around the world as people stand up, speak up and protest during a pandemic gives me hope. Everywhere, people are defending their rights, and the rights of others. People are sticking up for friends, families, neighbors and strangers.

I watched as the city I love descended into anarchy, taking pictures and videos as it got worse and worse. But before police clashed with demonstrators, I witnessed a peaceful protest, making me feel as though the entire city was unified.

And looking at people protesting from the U.S. to Europe, Israel to Hong Kong, I feel as though our global society is becoming unified. Thanks to social media and good journalism, we can watch each other fight injustice.

The future is in our hands. All it takes is the ability to exercise free speech, a passion for equality and wearing a face mask — keeping each other safe — to show solidarity with each other.