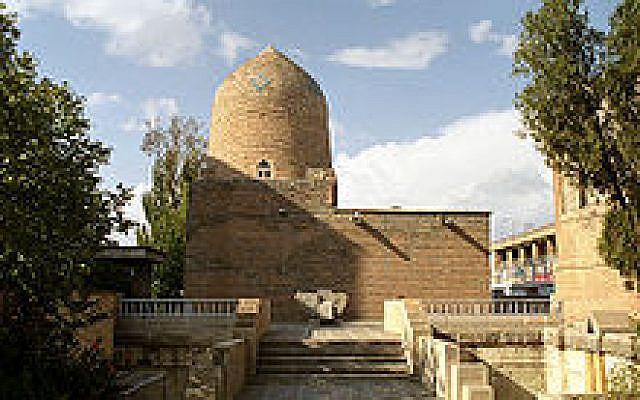 Alliance for Rights of All Minorities in Iran claims formidable Basij paramilitary force attempted to raid the historic site in what it called “an act of revenge against the Israelis Palestinian peace plan by President Trump.”

Iranian authorities are threatening to destroy the historic tomb of Esther and Mordechai in the city of Hamedan, 200 miles west of Tehran, in favor of constructing “a consular office for Palestine,” ARAM, the Alliance for Rights of All Minorities in Iran, said in a Twitter post on Sunday.

The organization claims that members of Iran’s formidable Basij paramilitary force attempted to raid the historic site in what it called “an act of revenge against the Israeli-Palestinian peace plan by President Trump.”

“Ester and Mordechai were biblical Jewish heroes who saved their people from a massacre in a story known as #Purim. Their burial site has been a significant Jewish landmark for Jews and history buffs around the world,” ARAM said.

In December 2010, Iranian protesters tried to breach the compound citing fears that Israel might damage the Al Aqsa Mosque on the Temple Mount in Jerusalem.

The Mausoleum of Esther and Mordechai (unknown age)

This site marks the traditional location of the graves of Mordechai and Esther, two cousins who played a pivitol role in the Book of Esther (also known as the Megillah). The saga of Mordechai and Esther form the basis for the Jewish celebration of Purim; hence, the site is of deep historical significance to Iranian Jews and the wider world wide Jewish community.

Mordechai and Esther lived during the rule of Ahasuerus, a Persian king who is also identified as Artaxerxes (possibly Artaxerxes II, who lived from 435 or 445 to 358 BCE).

The Book of Esther records that during a feast in Shushan, the capital, Ahasuerus asks his wife Vashti to display her beauty to the assembled guests. She refuses, and he subsequently removes her as queen. He then orders that the provinces of the kingdom be combed for beautiful girls to be brought before him, so that he may select one as his new queen. One of the women shown to him is Esther, a child being raised by the care of her cousin Mordechai. Entranced, the king selects her as his queen.

Mordechai earns favor in the king’s eyes when he catches word of a plot to assassinate the king, but meets resistance from Haman, a newly-appointed prime minister. Mordechai earns Haman’s wrath when he refuses to bow down to him in obedience. When Haman discovers that Mordechai is Jewish, he hatches a plot to execute not just Mordechai, but all Jews in the empire. Haman brings his plan to the attention of the king, who agrees with the decision, not having been told of Mordechai’s ancestry. The king advances Haman ten thousand talents of silver as payment, and Haman casts lots to determine which day to execute his plan. He settles on the thirteenth of the month of Adar.

Meanwhile, Esther and Mordechai hear of the plot to exterminate their people. She asks that all Jews in the empire pray and fast for three days together with her. During the night following the fasting, Ahasuerus has difficulty falling asleep and asks that the court’s records be read to him aloud to help him sleep. One of the passages happens to mention Mordechai’s prior service in uncovering the plot against the king, which Ahasuerus had not been aware of.

Surprised, Ahasuerus asks if Mordechai had been rewarded for his service, and is told that he had not. Just at that moment, Haman enters the room and is asked by the king what treatment should be given to a man the king wishes to honor. Thinking that he is the one, Haman instructs the king to mount the man on a royal horse with royal robes while a herald calls out praises. To his embarrassment, Haman is asked to provide this very treatment to his enemy Mordechai.

Mordechai’s prior service to the king appears to tip the balance in his favor. His cousin Esther declares her Jewish ancestry to the king with fear for her life, and she informs the king of the reasons why Hamadan hatched his plan against the Jewish people. In anger, he orders Hamadan’s execution on the very gallows Hamadan had prepared earlier for Mordechai. However, due to a peculiar feature of Persian law, the prior edict against the Jews cannot be rescinded. The king issues a second decree allowing the Jews to defend themselves as they see fit.

When the 13th of Adar arrives, the Jews rise up against their attackers without fear of official sanction. During the battle Haman’s ten sons are killed, along with 500 other attackers. In the aftermath, Mordechai is promoted and institutes an annual commemoration of the event which becomes the festival of Purim.

It is not known if the tomb of Mordechai and Esther is the actual site where they were buried. A parallel tradition holds that their bodies were brought to Baram, a site now in Israel, for burial. In any case, the site in Hamadan has been revered for at least eight centuries. Iranian Jews traditionally travel there to read the Megillah each Purim.

And now that we talked of Purim let’s tell a short story of Passover:

5.. Your PC will ask you, “Are you sure you want to delete Chametz permanently?”