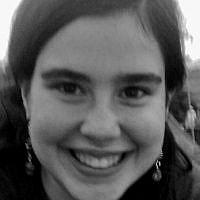 The Blogs
Leora Spitzer
Apply for a Blog
Advertisement
Please note that the posts on The Blogs are contributed by third parties. The opinions, facts and any media content in them are presented solely by the authors, and neither The Times of Israel nor its partners assume any responsibility for them. Please contact us in case of abuse. In case of abuse,
Report this post. 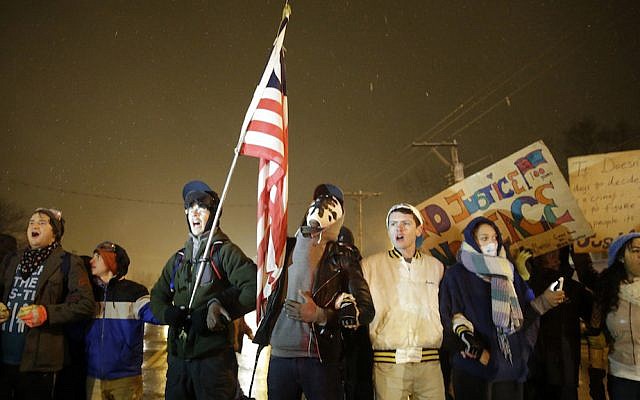 I do not identify myself as “white.” After centuries of Jewish persecution and victimhood, I do not want to be identified as racially privileged. I do not feel that I come from a legacy of oppressors, but from a legacy of being oppressed. Last night, however, I came face to face with the reality of my white privilege which could no longer be ignored.

In the car on the way to Ferguson, my group prepared. We chose buddies, inventoried medical supplies, exchanged phone numbers, and went over codes and hand signals — the sign for “everyone shut up, someone’s making an important announcement,” the sign for “run in the opposite direction right now,” and the codephrase for “white people get to the front because they are less likely to throw teargas at you.”

No matter how much I feel like I come from a legacy of victimhood, the simple fact is that, here and now, I have the luxury of choosing whether or not to be targeted by police. When police look at me, they see white, they see female, they see short and small and vulnerable. According to the racial profiling standards internalized by so many people in our culture, and especially police officers, I am about as threatening as a bunny.

As a child, my parents taught me to ask police officers for help when lost or afraid, since their job was to help and protect me. I was completely unaware of the very different conversations black parents have been forced to have with their children. Last night — as I wrapped a t-shirt around my nose and mouth in case of teargas and stood across a barricade from what seemed to be a hundred police officers wearing full riot gear, crouching behind their cars, and holding up clear plastic shields — was the first time in my life that I was terrified of the police. It was also the first time I have seen the police terrified, and that was almost scarier. 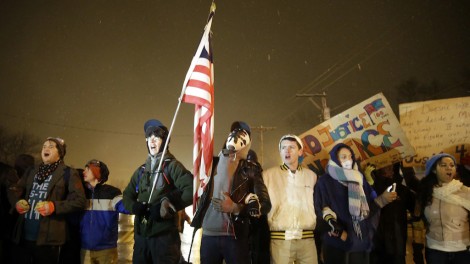 This week, as we mark the national holiday of Thanksgiving, I am more grateful than ever for the opportunities I had that allowed me to be who I am and where I am today. I grew up in a quiet suburb and went to private Jewish day schools where I received a quality education and learned to think critically. My teachers and parents challenged, encouraged, and supported me. Now, I attend one of the top universities in the country. I’m an Urban Studies major, and I sit inside classrooms and study the patterns of injustice, racism, and poverty, and the institutional structures that only serve to perpetuate these problems. Outside on the streets of this city that has become my home, these patterns continue to unfold in a heartbreakingly perfect case study.

Last night, I stood on the street among hundreds of citizens, listening as the prosecutor on the loudspeaker droned on and on. The silence of the crowd was tense and the anxiety felt as physical as the cold seeping in under the layers of our clothes. I could not make out any words in that meaningless droning. Around me, people whispered to one another: “Has he actually said it yet?” and “Do we know?”

Finally, the news broke that the officer would not be indicted. I heard screams, saw tears, and was jostled by people running in different directions. Immediately, the number of police officers by the barricade doubled. As I made my way with my buddy towards the hill facing the station, I could see both the crowd and the lines of policemen in riot gear. Above the hurt and angry crowd, a “Seasons Greetings” banner glowed with incongruous cheerfulness. The crowd constituted a group of mourners, sufferers, and allies, who stood up to say, “Not anymore.” The crowd began to chant, and I along with them, “Hey! Ho! These killer cops have got to go!” Then was the call and response: “Hands up!” “Don’t shoot!” While officials from the mayor up through the president called for peace and calm, we shouted, “No justice—No peace!” Up until this point, though I did see a few lone bottles thrown towards the police, the protest was nonviolent. People channeled their rage into powerful verbal demands for justice. The crowd began marching down the street, thinning out in front of the station. My buddy and I walked closer, passing protesters waving a huge banner that read, “Boycott Everything!”

As I fumbled with my phone to get a picture of the columns of cops, I heard a few sharp, loud, cracks. Someone nearby yelled, “Shit! Gun!” and we didn’t stick around to find out if he was right. We grabbed each other’s hands and ran like hell, streams of protesters sprinting along with us. A block away, we stopped, wondered if that had been a BB gun or firecrackers or something else, and circled back to our spot on the hill. We met back up with the Washington University protest organizer, who told us it was time to pull out. While we waited for the rest of our group back by the car, we heard circling helicopters, the muffled voice of officers on megaphones ordering protesters out of the street on penalty of arrest, and the quiet burble of an ornamental waterfall. We drove home carefully, past police cars with flashing lights, back towards our safe, quiet, campus. On the radio, we heard that a car had been set on fire right where we had been. Safely tucked in under my covers back at home, I found confirmation that the cracks we’d heard had indeed been gunfire, and saw pictures of that same “Seasons Greetings” banner surrounded by smoke.

Yesterday, I learned what to say if stopped by a police officer. I saw snipers and helicopters with searchlights for the first time off of the television screen. I heard the sounds of pain and anger and betrayal. Today, I write this description instead of the three different papers and projects due over the next week—homework that now seems so trivial next to the looks on the faces of my black brothers and sisters who had just been told yet again that their lives did not matter. Two days from now, I will sit down with my family and feast and give thanks for all the advantages I have been given, and I will pray for a day when those advantages are available to all.

At another time in our country’s history when everything seemed broken, President Lincoln established Thanksgiving as a federal holiday, recognizing the importance of appreciating what we have even as we strive for greater freedom and prosperity. Lincoln’s Thanksgiving Proclamation is wonderful in its entirety, but two lines at the end feel particularly relevant today. He wrote that while we thank God for everything we are privileged to have, we should also “commend to [God’s] tender care all those who have become widows, orphans, mourners or sufferers in the lamentable civil strife in which we are unavoidably engaged, and fervently implore the interposition of the Almighty Hand to heal the wounds of the nation and to restore it as soon as may be consistent with the Divine purposes to the full enjoyment of peace, harmony, tranquility and Union.” Amen.

About the Author
Leora Spitzer grew up in the Boston area. Now, she lives in St. Louis, where she attends Washington University. She is majoring in Urban Studies, and spends much of her time learning about the causes and consequences of institutional injustice, urban poverty, racism, and education.
Related Topics
Related Posts
Comments