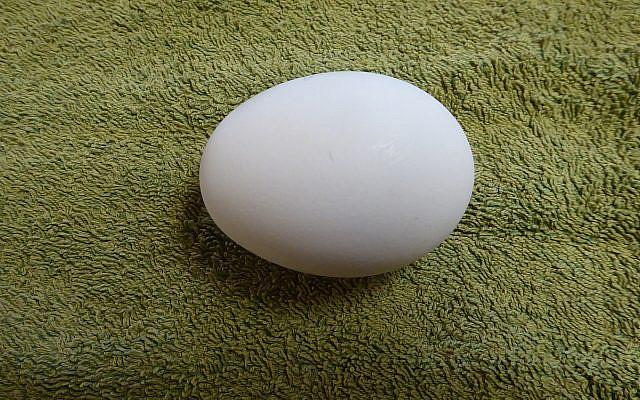 To Illustrate this Blog - An Eggsample (photo by Roger M. Kaye)

Today was to be a day of rest, a break from writing blogs but I find myself egged on by my many readers. If they are prepared to shell out for their Times of Israel I will have to oblige, even if it is only to crack a joke, or two. I hope that even my most hard boiled readers will blanch at the puns.

We take a look at the humble egg. It is with us in many guises. So, following the United Kingdom’s Egg Marketing Board’s advertising slogan from the 1950s and 1960s, let’s “Go to work on an egg”.

First, in the spirit of the times, we must balance the black and the white. As we all know, the egg white is the clear liquid that, when cooked, turns white.

Less well known are Kuro-tamago, “black eggs,” in Japanese. Ordinary chicken eggs are boiled in the hot springs of Owakudani. This volcanic valley in Hakone, Japan, has active sulfur vents and hot springs, formed some 3,000 years ago, after the eruption of the Hakone volcano. The sulfur in the springs turns the eggshells as black as charcoal. Legend tells us that eating an egg will add seven years to your life. The black eggs are sold in packs of five for less than $5. Perhaps this is why Japanese people have a life expectancy of nearly 85 years. For the price as a pint of beer they can add an extra 35 years to their lives!

When families gather for the Passover Seder, the Seder plate includes a hard-boiled egg, usually roasted. Its round shape alludes to the cycle of life, rebirth, and renewal. Around the same time, Christians are busy painting their Easter eggs. This custom may have started with the early Christians of Mesopotamia. They colored their eggs red, in memory of the blood of Jesus, shed on the cross.

Scotch egg. A traditional Scotch Egg is a boiled egg coated in pork sausage meat, with an outer crust of breadcrumbs. The Scotch Egg takes its name from scotching, the method of mincing the meat that coats the egg. The London department store Fortnum & Mason claims to have invented Scotch eggs in 1738 although there are several other theories about its origin. As it is not kosher, we Jews have no dog in the race.

A Fabergé egg is a jeweled egg created by the House of Fabergé, in St. Petersburg, Imperial Russia. It is believed that as many as 69 were created, but only 57 are known to have survived. If you have one of the twelve missing masterpieces, please let me know.

The egg has crept, or rather, rolled, into sports. From as long ago as the 1860’s, “Out for a duck” has been used as short for “Out for a duck’s egg”, a reference to the large zero, that resembles a duck’s egg, on the scoreboard. Similarly, in a tennis match, ‘love’, meaning a score of zero, comes from l’oeuf, French for egg.

The gold market is very unstable at the moment. So, if you have The Goose that Laid the Golden Eggs, I advise you to save any eggs it might be laying. The market will improve, although we do not know eggsactly when.

We note that the egg supply has greatly improved since World War 2. Oluf Reed Olsen, a Norwegian working in the Resistance for the British Secret Service, wrote a book describing his experiences – Two Eggs On My Plate. Before being parachuted to almost certain death in German-occupied Norway, he was given an unbelievable treat – two eggs for breakfast instead of just one.

And lastly, to give the devil his due, we should all enjoy a Deviled egg.