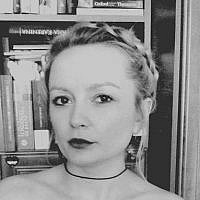 The Blogs
Solveiga Kurgonaite
Apply for a Blog
Advertisement
Please note that the posts on The Blogs are contributed by third parties. The opinions, facts and any media content in them are presented solely by the authors, and neither The Times of Israel nor its partners assume any responsibility for them. Please contact us in case of abuse. In case of abuse,
Report this post.

I am a woman. Once upon a time I came from a man’s rib. The End. This plain stupid interpretation of a single narrative amazes, fills me with anger and frustration every single time. Religion is not merely a tool to oppress the masses, it is a self perpetuating scam that leads the masses to oppress themselves. I lost my religion. That was the moment I was born again.

Anyway, this idea about the quotas in the political arena is plausible, but in my way of thinking it should be the last stop, the last destination, and not the 1st one. I think there should be quotas for women in creating enterprises in high-tech industry, there should be quotas in studying technological sciences, there should be quotas in technology transfer sector. These are the places where you start questioning things. This is the first destination, because the thing is – you can give me thousands of quotas, all the quotas in the world, but if I don’t know what I’m going to do with it might ruin your good intentions, darling. You see, we women, we have been under the whip for so long that we are simply unable to conceive of what it means to be free. Someone comes along with a key and unlocks the front gate. The guards are removed. But we remain in our cages. Freezing. Starving. Suffering. We refuse to accept freedom. It scares us. We still possess this slave mentality. I think that we have to go into the wild in order to lose this annoying thing in our heads. Mose’s example is inspiring. It might take 40 years, though.

There is a tremendous amount of statistical evidence that shows that women are important drivers for growth in many of the world’s economies. I celebrate the absolute grit and creativity of women. There is nothing that a woman cannot do. The thing women have yet to learn is nobody gives you power. You just take it. In my way of thinking, it’s going to be very difficult and time-consuming to get rid of thousands years of dogmas, to rewrite the story. We women belong where the creativity blossoms, where the innovation flourishes. We are a tiny force of Nature. The process of creative destruction is the essential fact about capitalism. It is what capitalism consist in what every capitalist concern has got to live in. It is believed that the technological entrepreneurship is as a key catalyst in fostering technological change. Technological entrepreneurship is a long-standing phenomenon in which invention and innovation are frequently performed by a single individual to a great and very efficient effect – maybe to find the role models or to become one. We women have an awful lots of things to learn. I believe that while doing this we will forget that according to one fairytale once we came from a man’s rib.