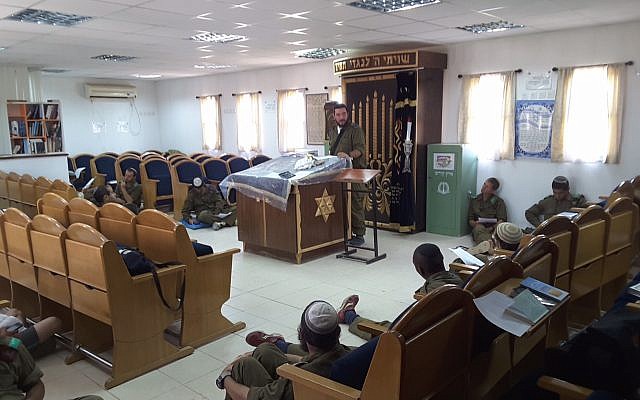 The Author at “Bislamach” the School for Infantry Corps Professions and Squad Commanders.

As Tisha B’Av, the 9th of Av draws to an end, I am reminded of an extremely special opportunity which occurred a year ago in the midst of my training to become an officer and a rabbi in the IDF Reserves. During the morning of the fast, we were sent to different bases in the south of Israel to speak to the gathered soldiers regarding the themes of this reflective day. I approached with respect and admiration my designated base, “Bislamach” the School for Infantry Corps Professions and Squad Commanders the location responsible for the training of all infantry corps squad commanders and platoon sergeants.

There was no better place than this to reflect upon the underlying message of Tisha B’Av, the necessity, and importance of unity and cohesion. Anyone with even a semblance of military experience understands that the basis of a properly functioning unit is its unity, its ability to take the various types of personalities their strengths and weaknesses and mold that into one cohesive force.  What is true for a self-contained military unit, is also true for the collective Jewish people and the State of Israel as a whole. How can we as a society achieve a sense of unity, when there are so many different and diverse outlooks and worldviews?

This is not a new question, it is one which has been deliberated and discussed by some of the greatest thinkers that the Jewish people have to offer. Rabbi Abraham Isaac Kook, the renowned chief rabbi during the British Mandate is one of the more contemporary voices to address this topic. Rav Kook,  who lived through the early stages of the renewal of the Jewish national home spoke and wrote about this topic on many occasions. In his mind, the true renewal and renaissance of the Jewish people in their homeland could only come about through unity. However, to Rav Kook unity did not mean conformity and the erasure of differences of opinion. Rather, it was the honest understanding that no one group holds a monopoly on the truth, that within the differences of opinions a person can still stand fast to their “truth” and well as benefit from the positive aspects of a different and sometimes conflicting “truth”.

The coming paragraphs are from the work Orot, written by Rav Kook in the 1920s in which he addresses this question of unity from the perspective of the fractured society in which he lived. Sadly, close to 100 years later we are still suffering from disunity and the ancient malady of Sinat Chinam, Baseless Hatred. There is still much work to be done to build a society of mutual respect and understanding, however internalizing the message of Rav Kook will most assuredly start us off in the right direction.

Three forces are wrestling now in our camp. The battle between them is especially discernible in Erets Yisrael, but their effect draws from the life of the nation at large, and their roots are set within the consciousness penetrating the expanses of human spirit. We should be unfortunate if we allowed these three forces – which must necessarily unite among us, to aid one the other and perfect it, that each might check the extremism of the other – to remain scattered, mutually antagonistic, and schismatic. The Holy, the Nation, and Humanity – these are the three major demands of which all life, our own and every man’s, is composed. However, the distribution, whether one element occupies a major or minor portion, it is impossible to find a permanent form of human life that is not composed of these three elements. This goes for both the individual and the community.

The desired mixture of these three great demands must arise in every group that aspires to future life. When we observe our lives and see that these forces, despite their potential for synthesis, are increasingly divided, we are called to come to the rescue. The foundation of the schism consists of the negative aspects that each force views in its counterpart. The “negative aspects” in and of themselves are really not deserving of this title, for in every isolated faculty, especially the psychic, there are bound to be drawbacks, specifically when it expands at the expense of other faculties. In this, there is no discrimination between the holy the secular: all must enter under the “line of measure”’ and all require proportion. “Even the holy spirit which rests on the prophets, rests in proportion.”

But divisiveness, where there should have been unity, brings about the gradual emptying of spirit. Positive awareness gradually dissipates in the individual or the collective, because of the progressive shrinking of that particular faculty, which stubbornly resists the nature of spirit to unite with additional complementary elements. Instead, a negative awareness comes to nurture life. Then each master of some specific faculty is filled with fiery energy vis-à-vis his negation of the other faculty or faculties that he refuses to recognize. In such a life-style, the situation is terrible, the spirit broken, the position of truth, its inner awareness together with its love, falters and disappears, by virtue of the fact that it [i.e., truth] has been parceled.

The three official parties in the life of our nation [are]: one, the Orthodox party, as we are accustomed to call it, which carries the banner of the holy,  pitches stridently jealously, bitterly for Torah and commandments, faith, and all that is holy in Israel; the second, the new Nationalist party which campaigns for all the aspirations of the nationalist tendency, which comprises much of the pure naturalism of the nation, which desires to renew its national life, after it was so long hidden within due to the violence of the bitter exile, and much of that which it absorbed from other nations, which it desires to recognize as positive inasmuch as it deems it fitting for itself [i.e. the Jewish people] as well; the third is the Liberal party, which not so long ago carried the banner of Enlightenment and whose influence is still great in wide circles, does not fit into the nationalist scheme and seeks the universal human content of the Enlightenment, culture, ethics, and so forth.

It is understood that in a healthy state there is a need for these three forces together, and we must always aspire to come to this healthy state, in which these three forces together will reign in all of their plentitude and goodness, in a whole, harmonious state in which there is neither lack nor superfluity, for the Holy, the nation, and Man, will cleave together in a love lofty and practical.

The individuals and also the parties, each of whom finds his talents best suited for one of these three elements, will congregate together in worthy friendship to recognize each the positive mission of his companion. Then this consciousness will be increasingly perfected, until not only will each recognize the positive aspect of each faculty as something worthy to be employed for the general welfare of the combined spirit and also for the individual benefit of the establishment of that particular faculty…but beyond this, the positive content of the negative aspect of each faculty in proportion, he will recognize as good, and know that for the good of the particular faculty which he tends to, he must be influenced to a degree by the negating aspect…Thus when we look intelligently at the eruptions from which we suffer so in our generation, we know that there is but one way before us: that everyone, whether individual or group, take to heart this lesson, and together with the defensiveness that everyone feels toward that particular strength to which he is attached, by natural temperament and by habit and training, he will know how to use faculties that reside in other persons and parties, in order to round himself and his party, whether through the ratifying aspect of those other faculties or through the good portion of their negating qualities, which truly fortify his particular strength by preserving him from the ruination of exaggeration, which causes weakening and intellectual flabbiness. In this manner, we can hope to arrive at a state of living worthy of one nation in the land…