The Blogs
Zelda Harris
Five on the 100 aliyah from UK list!
Apply for a Blog
Please note that the posts on The Blogs are contributed by third parties. The opinions, facts and any media content in them are presented solely by the authors, and neither The Times of Israel nor its partners assume any responsibility for them. Please contact us in case of abuse. In case of abuse,
Report this post. 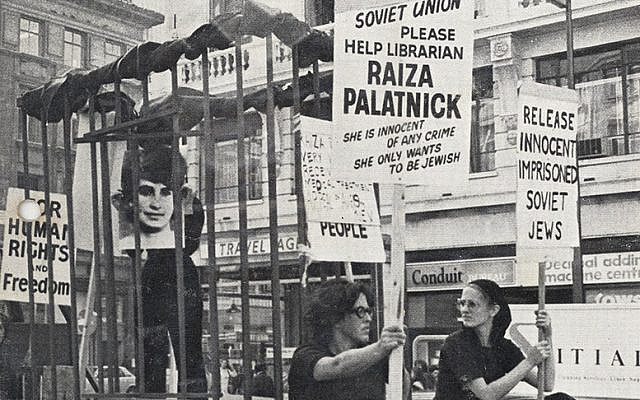 In 1972 I was living in London  as an Israeli who was longing to go home. I joined or actually helped found a group called The Women’s Campaign for Soviet Jewry commonly known afterwards as the 35’s since it was 35 women dressed in black who had sat for the first time ever, outside the Soviet Consulate in London!  We were protesting the imprisonment and threat of capital punishment of the group  known as the Leningrad 12 who had tried to fly to freedom but were caught by the KGB.

Added to our dedication to the cause, apart from being seen on the streets or in open trucks dressed as prisoners even toting a grotesque mask of Brezhnev the President of the Soviet Union at the time,some of us were engaged in the sending of books. This project had been started by June Jacobs z’l, Andrew and Jean Balcombe, now living in Israel, and others.

A few brave or sometimes headstrong individuals within the British Jewish community, offered to go to Moscow. They would visit those who had become almost our family.  We had set up an adoption programme and started to write personally to families. This however, on the understanding that many of our letters would never reach their destination since the KGB intercepted all mail and parcels from the West.. Some of the prominent activists in the  struggle,  such as Vladimir Prestin and Prof. Benyamin Fein considered education and knowledge of  Judaism,Religion and the Israeli way of life  essential to  realize, the dream.The  waiting time for a visa was open ended.Indeed most of the first batch of Refuseniks only arrived in 1987.Some were released earlier, but I will not delve into those.

So it was Volodya Prestin  as I knew him, who asked me in one of our fractured telephone conversations to please get potential visitors to the FSU to bring in the paperbacks of the writings of Rabbi Adin Steinsaltz, which had been mass produced.

That was the first time I had heard about that particular Rabbi.

Since Volodia had already asked me if indeed I was a relative of Thomas Harris who had written “I’m OK,Your OK” and I had found his, books and sent them on, I immediately acceded to his request and hundreds of the great Rabbi Steinsaltz’ books were in time distributed to our isolated friends.

Unfortunately I never had the honour of meeting him but in his passing I want to say how grateful we should all be to him for his wisdom and influence and pray that the Israeli public as a whole be inspired by his beliefs.  Baruch Dayan Emet!

About the Author
Zelda Harris first came to Israel 1949, aged 18. After living through the hardships of the nascent state, she returned to England in 1966. She was a founding member of the Women's Campaign for Soviet Jewry. In 1978, she returned with her family to Israel and has been active in various spheres of Israeli Society since. Together with the late Chaim Herzog, she founded CCC for Electoral Reform, was the Director of BIPAC in Israel, and a co-founder of Metuna, the Organisation for Road Safety, which received the Speaker of Knesset Quality of Life Award for saving lives on the roads and prevention of serious injury. She is now a peace activist, blogger for Times of Israel and is writing her life story.
Related Topics
Related Posts
Comments