Today, I watched my mentor cry.

I picked up the car phone to learn that the bodies of the three kidnapped boys – Naftali Frenkel, Eyal Yifrach , Gil-ad Shaar – had been found. Rabbi Adin Steinsaltz, their teacher, my mentor, was beside me in the car. It was my sad job to let him know. 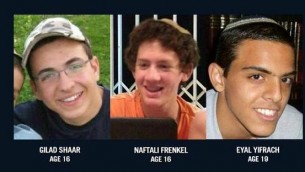 Rabbi Steinsaltz, perhaps the wisest Jewish sage of our time, is the Dean of the Mekor Chaim high school, where two of the boys were students, and where I too had the privilege of studying. The news splashed across his face and turned it white. Tears streamed down his cheeks. Uncontrollably, he repeated the Psalmist’s words: “For Your sake we are killed every day; we are being slaughtered like sheep!”

“Why?” I asked him. “Why, Rabbi, does God do this?” He was silent. But I knew that he was not ignoring the question. Quite the opposite: he was answering it, through his reverberating silence. Indeed, these tragedies are inexplicable. Sometimes, God is irrational. He is beyond understanding. “All we can do,” Rabbi Steinsaltz told me after a long pause, “is shout and protest.” Again, he quoted the same Psalm (chapter 44): “Awake! Why are you sleeping, O Lord? Rouse yourself! Do not abandon us forever!”

But it was the lesson that he drew from this tragedy that most moved me: “People will light memorial candles, recite prayers, and attend vigils,” he said. “Our boys were killed al Kiddush Hashem, because they were Jews.”

The Rabbi went on, “Therefore, to best honor their memories – indeed, to confront evil –we must act always as proud Jews, in our deeds and through our lives.”

A dark cloud has befallen our nation today. Our hearts are broken, yet united with the hearts of the boys’ families, as we mourn and we cry with them. We cannot erase the evil. But we can create good. We can transform the world through goodness by living as Jews and acting as Jews, with our Torah and mitzvot.

Let us demonstrate to the world that “the more they were oppressed, the more they multiplied” (Exodus 1:12), and that the very Jewish soul that our enemies so wish to destroy, is alive and vibrant as ever.

Until the day, when God “will destroy death forever, and wipe away the tears from all faces” (Isaiah 25:8). Amen.