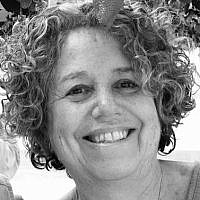 Sages suggest that the heavens are more fully open during the Days of Awe, the days between Rosh HaShanah and Yom Kippur, with the possibility for us to have a stronger connection to God. And so, on September 20th, 2015, rabbis of all denominations joined together and gathered for a rally … 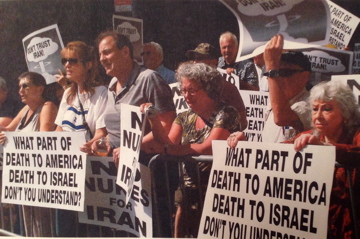 In the past months, we’ve heard from politicians from the Left and from the Right – ‘the Iranian Nuclear Deal is good,’ ‘the Iranian Nuclear Deal is bad.’ We’ve all read that 340 rabbis signed a petition stating they are in favor of the Deal [mostly Reform and Conservative rabbis.] Yet shortly after that anoer letter initiated by two west coast rabbis and open to all streams of Judaism and signed by approximately 1100 rabbis, opposed the Deal; though most were Orthodox, those who signed were outside of institutional Orthodoxy. In addition, on Facebook a small cross denominational grassroots petition grew in opposition to the Deal. Social media informed us of rallies planned in various cities across the country, mostly politically connected. There have been phone calls made, emails, snail mails, and petitions on both sides sent to individual Congress people – brought to the fore, heated encounters further dividing the Jewish community.

How Was THIS Rally Different?

The Rabbinic led rally on September 20th was a Communal Call to Conscience — a rally led by rabbis, and not politicians!  It was a rally to request a Better Iran Nuclear Deal! It was a rally with Judaism united, with participating rabbis representing all streams of Judaism.

‘United we stand,’ is a meaningful goal, for in unity there is strength!

Considering the polarization we’ve been witnessing as a Jewish community, this September 20the rally reaffirmed our united stand as a Jewish people; we are standing together and asking President Obama for a Better Deal. We are reminding ourselves that as a nation and as a Jewish people who love Israel, we need to achieve a Better Deal. The rally called upon our nation’s leadership to stop Iranian nuclear intimidation, regional hegemony, human rights abuse, and international terror. Rabbis were present from across the denominations – Reform, Reconstructionsist, Conservative, and Orthodox.

Rabbis who Signed on!

Rabbi Avi Weiss, at the start of the rally

Twenty four rabbis signed on for the rally, a substantial number. Most, though not all, were able to be present. After all, the Sunday before Yom Kippur is a busy day on the Jewish calendar for all Jews, but especially for rabbis. This spontaneous event was the idea  of just a few — Rabbi Avi Weiss, an Orthodox rabbi, well known for his social activism and strong words offered opening remarks, and Rabbi Bruce Ginsburg, a Conservative rabbi, President of the Union for Traditional Judaism, offered closing remarks. Most rabbis represented local tri-state communities. The committee of participating rabbis:

Rabbi Joseph Potasnik, President of the NY Board of Rabbis

What better place for the rally than at the corner of 45th Street and First Avenue, facing the United States Mission to the United Nations, with the UN itself directly across First Avenue? As more and more people gathered, signs were held – NO NUKES FOR IRAN, and DON’T TRUST IRAN, and WHAT PART OF DEATH TO AMERICA AND DEATH TO ISRAEL DON’T YOU UNDERSTAND? The rally stage was truly turned into a ‘bimah’ – more than a mere platform – for the rabbis of the various congregations. Each rabbi joined this effort in a true ‘call to conscience defining moment,’ setting aside differences of Halacha, or ritual, or daily observance.

Following Rabbi Weiss’s remarks each rabbi passionately expressed why this Deal needs to be rethought for the benefit of the US, for Israel’s benefit, and for the benefit of the entire world. Some comments were spiritual, others contained historical references, still others raised the unanswered questions which leave us uncomfortable: the unsettling issue of secret “Side Deals” still undisclosed, the statistics revealing the fact that the majority, rather than the minority of Americans do not support the Deal, the vast sums of money which will become available to a terrorist regime, the issues around Iran’s ‘self verification.’ They questioned why President Obama decided to ignore the House vote, and why he involved the UN when he did. 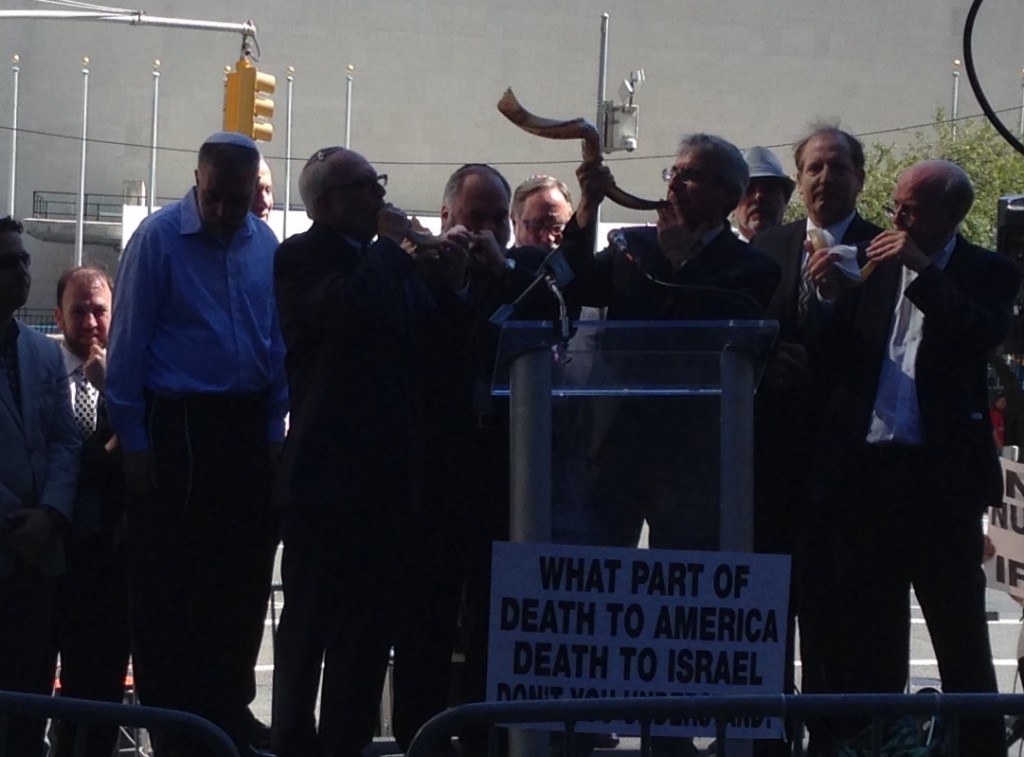 Shofar blowing – hearty and strong Tikiyot – pleading into the heavens, interspersed the rabbis’ remarks, along with the recitation of three Psalms.

There were musical interludes and solos by the Pey Dalid Simcha Band with tremendous audience participation, and spirit.

“I will lift up my eyes to the mountains,

From where does my help come?…

My help comes from the Lord our God,

Creator of heaven and earth.” 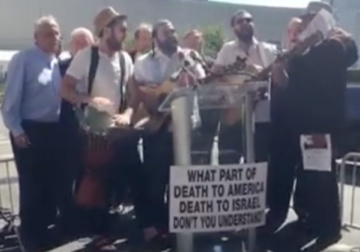 The Letter to President Obama was Read Aloud and Then Delivered

Toward the rally’s end, the letter addressed to President Barack Obama and signed by the rabbis, was read aloud to those assembled. After reciting a quick Mincha service, the rabbis walked across the street, and delivered it ‘in the moment’ to the State Department via its security guard for delivery to Samantha Power, US Ambassador to the United Nations, who in turn will deliver it to President Obama. The letter’s text is below. 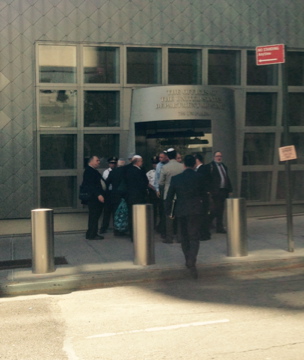 A Communal Call to Conscience –

The Rabbinic-led Rally for a Better Iran Deal

We are a group of rabbis from across the Jewish denominations – Conservative, Orthodox, Reconstructionist, Reform, and Traditional – who have just led a rally opposing the Iran nuclear deal. Our call to conscience is not only a strong political statement, but is spiritual at its core.

With prayer and resolve, we write to you about our deep disappointment in your approach to this deal. It is our strong feeling that you have a moral responsibility to reveal all of the secret side agreements to the American public. The Bible declares “righteousness, righteousness you shall pursue.” The rabbis explain the double language to mean, righteousness you shall righteously pursue. Your keeping side agreements secret is a violation of this principle.

Moreover, we take great exception to your using your power to block debate and a vote on the matter in the Senate. This deal is one of the most important international agreements signed in recent memory. It certainly deserves to be discussed and become a matter of record in the People’s House.

It is because we pray for peace that we raise a voice of conscience regarding the Iran deal and declare: Mr. President, America needs, wants, and deserves better.

(Signed by the rabbis)

For me, this rally was a Jewish historic moment… The rabbis stood together! That was the key; it was as if they were together at Sinai! They blew their shofarot together, then danced together in a circle, hands around each others’ shoulders.

As Rabbi Ginsburg emphasized, “This rally is not the end. It is only the beginning.” We must take heed; our work has just begun! I, too, hope it is a beginning – for us to ‘deal with The Deal,’ for the Jewish people to stand as one, and in our mutual dialogue and discourse, recognize that our similarities are so much stronger than our differences.

As I leaned against the building, my face looking up into the blue skies and bright sun, singing “Esa Einei,” over and over, louder and stronger, faster and faster, as is the custom, I felt the tune and notes rise up, hopefully far enough to reach the heavens. In the same way, I hope that when the letter reaches President Barack Obama, he too, comes to the realization that we need a Better Iranian Nuclear Deal.

How YOU can view and listen to the rally if you were not able to be present!

Taped by the JBS, the Jewish Broadcasting Service, the rally can be viewed in its entirety, for which we thank Rabbi Mark Golub and JBS/Shalom TV.

Viewing and/or listening to the rabbis’ remarks will hopefully inspire you to more fully sense this renewed Jewish unity, and perhaps bring its spirit to your own community, to your own rabbi. There certainly will be more opportunities for unity needed in the days and weeks to come.

About the Author
Sandy Wasserman is a wife, mother, grandmother- LOVER of Israel and all things Jewish! She is a retired teacher and children's author.
Comments