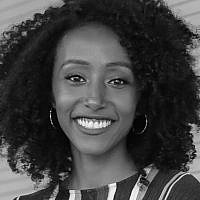 The Blogs
Eden Amare Yitbarek
Apply for a Blog
Please note that the posts on The Blogs are contributed by third parties. The opinions, facts and any media content in them are presented solely by the authors, and neither The Times of Israel nor its partners assume any responsibility for them. Please contact us in case of abuse. In case of abuse,
Report this post.

The Corona virus hit the black community in the United States the hardest, yet it became the window of opportunity to let out all the emotions that have been bottled up for centuries. The Black Lives Matter (BLM) movement finally got the worldwide attention it deserves. What was once a statement that was deemed controversial to many, is now being loudly echoed all over the world.  The BLM movement was created after the tragic killing of Trayvon Martin. From the death of Trayvon Martin up until the killing of George Floyd, countless black civilians have been murdered by the hands of racist police and racist civilians. Most of these horrifying incidents were caught on tape, like the death of Philando Castile and Eric Garner. Everyone that saw the two videos was shocked, terrified, and saddened, yet the protests that followed were never as widespread as the current one.

So, would “Black Lives Matter” be trending worldwide if we were not in the midst of a pandemic?

As depressing as it sounds, it took a global pandemic for the world to hear the cries of the oppressed and marginalized black communities.  For the black community of the United States and black communities worldwide, the fight for justice have been on going. Black people do not get the privilege to watch racism unfold from the side lines, as it affects every aspect of our lives.

The Corona virus has changed our world dramatically. As a result of this pandemic, millions of people around the world are unemployed and frustrated at their governments. For the black population of the United States, this pandemic is just like adding salt in the wound- not the kind of wound you would get after falling in the playground, rather a wound that came  from repeatedly being tripped by your co-worker while working overtime. And every time you pick yourself up, your co-worker trips you again and says it is all in good humor, but at this point you are bleeding and are in pain. Subsequently you get denied proper pay because you did not manage to finish the job properly and you were far behind the other workers.

The United States was hit hard with the effects of the Corona virus, millions of people are unemployed, and many businesses shut down. Unfortunately, these negative effects are amplified within the black communities who were already facing economic disparities prior to this virus. It has been reported that the death rate is twice as higher for black Americans than the rest of the American society. In crises, it is common for the marginalized and disadvantaged groups to suffer the most. The pandemic mixed with years of oppression brought people out to the street demanding for change.

As a result of the Corona, non-black people have free time to go out and protests alongside the black community. Moreover, people spend more time following the news and social media, thus are constantly updated. Furthermore, as mentioned, although not on the same scale, they still suffer from the negative effects of Corona  thus are frustrated at the government, the current situation and want to let it all out. Of course, there are countless nonblack people that have supported the movement throughout the years and believe that black lives truly matter.

It is powerful to see thousands of people roam the streets rallying around a common cause, to end systemic racism. However, can this unity out live the “Corona Era”? To see concrete change, the fight against systemic racism needs to keep going and growing, because you cannot dismantle centuries of systemic oppression, suppression, and economic disparities so easily. The struggles of the black community predate the United States, thus cannot be fixed overnight. The fight must continue and must outlive the Corona era.

About the Author
Eden was born in Eilat, Israel and grew up in Addis Ababa, Ethiopia. She moved back to Israel at the age of 18 and served in the IDF as a truck driver. Following her discharge, Eden enrolled at IDC where she is a part of Israel At Heart leadership program. At IDC she is on the Dean's list and participated in the Ambassadors Club. She is also a part of the Argov honors program in Leadership and Diplomacy. Additionally, she works as a research assistant for the American Presidential Rhetoric Project at IDC. In 2018, she spent her summer interning at the United States Holocaust Memorial Museum in Washington, DC.
Related Topics
Related Posts
Comments