The Blogs
Paula R. Stern
Apply for a Blog
Please note that the posts on The Blogs are contributed by third parties. The opinions, facts and any media content in them are presented solely by the authors, and neither The Times of Israel nor its partners assume any responsibility for them. Please contact us in case of abuse. In case of abuse,
Report this post.

What would you do if you were working on your computer, checking news and Facebook when you got bored…and all of a sudden, you got an update that showed a video of an attack against a school…and the school was the one where your son was at that moment? 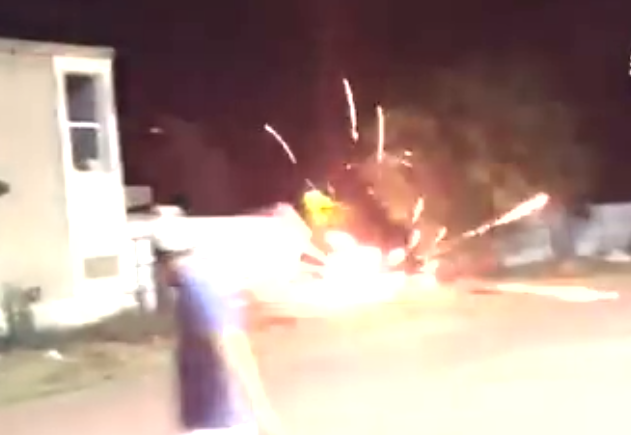 I’ll start by saying my son is fine, that all the boys were okay. I’ll add that this has been an ongoing event, escalating from rocks thrown into the yard, then at the school building, shots fired, and now fireworks shot into the yard as the boys played basketball. With shaking hands and tears beginning to flow, I dialed my son’s phone and prayed that he would answer.

God, I thought to myself…they shot firecrackers into the yard.

Davidi answered after a few rings. “Everyone’s okay?” I asked in as calm a voice as I could manage.

“There was a fire,” I said stupidly. “Did you call the police?”

There was some more conversation and somehow mixed in, he said something like,”we were expecting it.”

Rule number one in the handbook of parenthood is that you should never ask a question you aren’t prepared to hear the answer to…”why were you expecting it?” I asked even more stupidly.

“Because it happened last night.”

Yeah, well, that’s fine. All you really ever have to do is tell a mother not to worry, and she won’t, right? Hey, rocks, gunshots and now fireworks…why should I worry?

Should I mention here that my son goes to yeshiva in Ramle and before you throw around that “settler” word, look at the map!

My mind is a jumble, even now. A mixture of pain and fright and anger. And worst of all, I don’t know to whom to address it. The government and security forces and police for not being there? They can’t be everywhere!

The mayor of Ramle for deciding the best way to “reclaim” the city was by putting a yeshiva full of pre-army teenage boys right there on the edge? Well, yeah, there’s one target. But the mayor is doing what is best for his city.

The boys? No, not them…they handled it right. They documented it but didn’t get too close? Well, sorry, guys – you were outside, that’s already too close for me…but you did good. You did right. Let the world know.

This was a school! Not a single soldier was there; no weapons, no rockets.

Unlike in Gaza and the UNRWA schools, there are no explosives stored there.

And this is not the first time the Arabs have attacked the school…and no, I don’t expect world condemnation…after all, with the greatest of gratitude to God, there was no blood and so there will be no great cry of outrage.

Except from a few mothers, who saw a video and cried as they spoke to their sons…begging to hear…he’s okay…they are all okay…

You can see the video here.