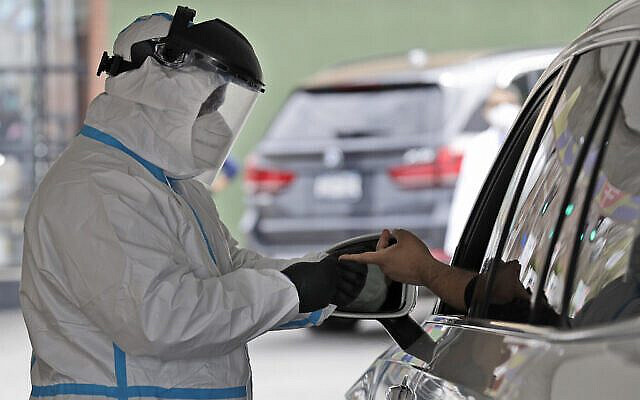 A man's blood is collected for testing of coronavirus antibodies at a drive through testing site in Hempstead, New York, April 14, 2020. (AP Photo/Seth Wenig)

The next stage in the annoying but necessary corona discussion may well be randomized testing. And like much else about this calamity – but also about life itself – it involves excruciating choices and implementation difficulties.

To begin with, the true mortality rate of COVID-19 is a major question that must be balanced against how much damage we’re willing to do to our economy and society. Meaning, how much longer we keep protective measure in place, and in what form.

Some people freak out at the mere mention of this tradeoff, and they are apt to get self-righteous. It invites accusations that one loves mammon more than man; the especially wicked might even liken you to Donald Trump. But a cruel fact is no less a fact: few people would plunge the world into another Great Depression to prevent a single death. And economic calamity will also cause deaths, in its own grim variety of ways.

The mortality attaches to two statistics: how many people have been killed by COVID-19, and what is the percentage of the infected who will die.

The first figure is somewhat knowable, because we are probably catching a high proportion of the deaths, since these are generally noticed and a cause at least superficially searched; but it is not terribly meaningful in the discussion about ending the quarantine. That’s because the figure has certainly been suppressed by the measures.

So in Israel’s case, the country may have “only” 200 corona-related deaths, which may not be “enough” to send another million people into unemployment; but what if no quarantine would mean 20,000 deaths or more, as some very senior politicians have (perhaps self-servingly) suggested? Then it probably would, and I think most would agree it should.

Therefore the second figure becomes far more relevant. If we opened up the economy, and stared down the virus, and risked half the country getting infected (as the World Health Organization thinks will happen), how many would be at risk of death? What is the percentage?  For this we would need to know how many people really have the virus at exactly this moment in the timeline – and divide the 200 deaths by that figure.

So the true infection rate right now is a key data point as we ponder how much longer to risk driving people into bankruptcy and depression.  If they jump out of the window they may not violate the restriction to stay within 100 meters of their residence, but the chances that they die upon reaching the ground are surely far higher than mortality from COVID-19.

Israel is currently showing a 1.3% mortality rate based on the aforementioned 200 deaths and about 15,000 infections. But there is consensus that the infected are undercounted.  Only people with symptoms are getting tested (and not even all of those). The disease, especially in young people, is frequently not even symptomatic.

So how many are really infected? Twice the known number? Three times? If it were four times or more then the resulting mortality rate of the novel coronavirus would actually be similar to many strains of the regular flu, which has never caused anyone to contemplate the shutdown of economies, the ending of Premier League seasons, or the banishment of handshakes, hugs and kisses.

One way to find out would be to test the entire country – almost 10 million people. It would be another huge unplanned expense on top of three elections within a single year. And it seems logistically impossible: the Health Ministry sounds very impressed with itself for managing a few tens of thousands. No, this is not the way to go.

The other way might be randomized testing, analogous to polls about public opinion or anything else. Is that more practical? Maybe so.

After all, how many people do you need to survey to get a pretty good sense of the support for Netanyahu versus Gantz? There is always a margin of error of a few percent, but 1,000 is generally enough in most countries. The condition is that the sample be representative.  You do not choose your 1,000 people among protesters seething with anger against the Supreme Court; you do not choose your 1,000 people from students of literature at Haifa University.

And the sample must not be self-selected – which is precisely the nature of the sample we are currently getting with the testing regime, in which people ask for the tests (and have higher chances to be sick). That gives you selection bias, which invalidates the result.

So a neutral, central authority would have to randomly choose a pool of people to be tested which would constitute a representative sample along geography, age, gender, preexisting conditions and other relevant demographic dimensions.

The problem is that when it comes to undergoing medical procedures, even trivially simple ones, some  people are likely to refuse. Given the levels of distrust we face in Israel (and much of the world), some people will refuse anything on principle.

Of course, people refuse to answer in many polls. In political surveys especially they are apt to mislead.  Sometimes they are willing to begin but won’t or can’t complete a questionnaire. Sometimes people are hard to reach, because of geographical, technological or other limitations. Pollsters have been dealing with these problems with varying degrees of success (see this study on non-response from Pew).

So, if the non-responders were not predictable and their numbers were too high, and random testing were deemed essential to an intelligent lifting of the quarantine, this would require a plan to compel them.

Forced testing seems inconceivable. But on the other hand, until recently so was a President Trump or an Israeli prime minister serving while on trial for bribery; perhaps nothing is anymore inconceivable.

The alternatives would be punishments for the refusers, or perhaps rewards for those who acquiesce. How much should we pay people to clam up and take the corona test like adults? Would we pay everyone? If just the refusers, how many would we need to pay?

Eureka! Perhaps the first step is to answer that last question with a poll: If you received a text message saying you had been selected for randomized coronavirus testing, would you salute and submit – or would you quibble?