While Israel and Hamas stand toe to toe over Gaza the proxies wade in all over the world. As per usual London is at the forefront of a movement that calls for an end to the Israeli operation. On Friday 10,000 people reminded me how much happier I am to be in Israel, even while the missiles are flying, than the city where I was born and raised.

In London 10,000 people massed outside of the Israeli embassy on Friday to demonstrate against the fact that  Israel is bombing Hamas in Gaza. Naturally this hodgepodge of lunatics couldn’t even find 10 people to stand outside the Syrian embassy at any point during a war that has resulted in the death of over 150,000 civilians. But in London when it comes to expressing an opinion on the Middle East the only one that’s acceptable is outrage against Israel.

Surprisingly it doesn’t matter how many people have died or the proportionate difference between sides. The organizations sending people to demonstrate outside the Israeli embassy aren’t interested. There’s no such thing as nuance there, there’s no such thing as an enlightened understanding of who Hamas are and the fact that they care more about killing Israelis than hurting Palestinians. You can’t explain to them about the problems Israelis face or the quest for peace. The prevailing opinion is simple;

Israel = bad deviate from that message and be branded a racist.

The organizations involved in the demonstration outside the Israeli embassy ostensibly have nothing to do with the Middle East. They include the Stop the War Coalition, the Campaign for Nuclear Disarmament and War on Want. Every time there is a reason to demonstrate against Israel they mobilize their faithful and get them on buses to the Israeli embassy.

There they are joined by Muslim organizations who have done nothing to protest the widespread slaughter of Muslims across the Middle East from Iraq to Syria and in the Sinai Desert. Naturally the instant it’s about Israel they all jump with vigor to attack the Jewish state, including the Islamist; Islamic Forum Europe and the British Muslim Initiative. 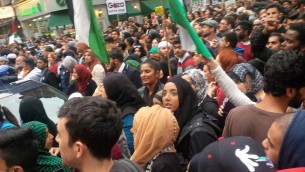 Naturally there are the “Jewish” fellow travelers coming along to these demonstrations. The words they speak may be “not in our name” but the message might as well be “we’re petrified you’ll launch a pogrom against all Jews if we aren’t here telling you clearly that we’re Jews and we don’t support Israel.” The man in the picture below is from the Neturei Karta. These supposedly ultra orthodox Jews have a penchant for heading to Iran and participating in conferences denying the Holocaust. 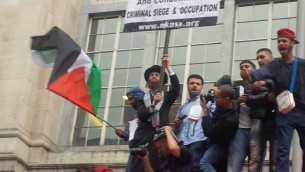 The irony is that while these protests succeed in doing nothing for Palestinians they help Israel. The Jewish community instinctively moves towards defending Israel, donations go up, support for Israel among Jews who would normally spend very little time thinking about the country peaks.

According to the Community Security Trust (and to the surprise of no one) there is a spike in anti-Semitic incidents in the UK every time Israel is involved in a conflagration of this kind. Even more to the point is that these people who claim to be against violence will soon be rioting (if true to previous form). While the Jewish community will organize a candlelit vigil where they will sing songs and hold hands (if true to previous form).

The Facebook page of the Palestine Solidarity Campaign is here. They’re the principal organizers of this demonstration. See how long it takes you to find anti-Semitism expressed there. I found this little nugget after about 30 seconds of looking;

And these are people who feel themselves enlightened?