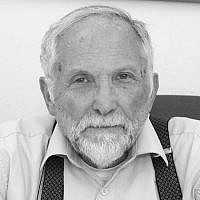 The Blogs
Menachem Gottesman
Apply for a Blog
Please note that the posts on The Blogs are contributed by third parties. The opinions, facts and any media content in them are presented solely by the authors, and neither The Times of Israel nor its partners assume any responsibility for them. Please contact us in case of abuse. In case of abuse,
Report this post. 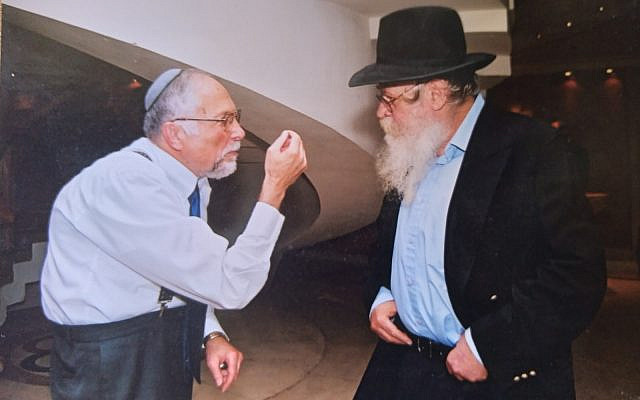 Consider the incongruities implicit in the lifestyle of the Patriarch Abraham. He undermined those who nurtured him in a culture of self-serving values, the trappings of status, of the worship of material objects and familiar assumptions while opening his heart and modest abode to all those who passed his way.

Advancing from the idioms and presumptions of long-standing traditions of cosmic disorder, Abraham embarked on a journey to imbue all those who were receptive with his love and dedication to a compassionate all-powerful Creator. Despite the role he assumed of sharing his fervor for a life of purpose and worth, he was steadfast in his commitment to modesty and self-effacement, which can be witnessed in relation to his wife, his sons, no less than to his Maker. How is all this possible within one individual? But then, one can ask such a question in respect to the unusual life story of the recently departed Rav Adin Even Israel Steinsaltz, of beloved memory, who has left so many of us  bereft.

Some of you may be familiar with Rav Steinsaltz’ own journey from a fiercely atheistic upbringing to the Chassidic circles of the Lubovitcher movement.  Incredibly, en route, he acquired the determination and skills to transform the complex, challenging language of the traditional Jewish discourse of the entire Talmud, along with explication of the full Hebrew Bible, into accessible, comprehensible source material for the Jewish masses.

Not only was his native Israel his target, but Jews in countries around the globe, including the former Soviet Union. He accomplished no small task, considering the more than four decades this undertaking required, along with his authorship of countless books. Nor did this output suffice for this steadfast educator. Rav Steinsaltz proceeded, as well, to establish a network of religious educational institutions that are held in high regard for their focus on excellence in Jewish study. With all the accolades that can be attributed to the height and breadth of this man’s life work, allow me to shed light on some personal insights I gained of this legendary figure after an unusual first encounter.

It took place in the front yard of the alternative high school, then located in Northern Jerusalem, that I had founded several years prior for youths from mostly religious backgrounds who didn’t fit into the general school system. Although this co-ed learning center had finally received official semi-private status, its future was still at risk. It was a challenge for many of the educational authorities to relate seriously to our rather unconventional framework for a variety of adolescents who were at odds with formal requirements, as well as, in many cases, with their families and communities.

Negative stereotypes and degrading labels of the student population at Mercaz L’Mida Dati (Meled) had acted as a deterrent to close contact by most officials. The prospect, then, of the upcoming visit of such an acclaimed Rabbi as Rav Steinsaltz greatly aroused the curiosity of the students. Why would such a celebrity of stellar Jewish learning in the modern religious and Chassidic circles be interested in meeting them, of all youths?

How incongruous, but inspirational was the actual interaction. At the insistence of Thomas Nissell, of blessed memory, his close aide and confidante who was familiar with Meled firsthand, Rav Steinsaltz arrived at the school’s Ramat Eshkol location to investigate its alternative educational framework, a framework with a very different emphasis on scholastic performance than that to which he was accustomed.

Before he could reach the portals of the building, many of Meled’s students, draped, as usual, on the benches and grass by the front walkway, barraged him with questions. What did he want to know about them, about what they did with their time, both in and out of school, about what was really important in their eyes?

Surprisingly, the Rav sat right down in their midst, encouraging both their inquiries and whatever they were willing to divulge. So absorbed was he in this informal interaction, in learning all he could about their personal narratives, their feelings about education in general and the difference in their present framework, that he had to be reminded repeatedly of other obligations in that day’s schedule. Meanwhile, the students were no less fascinated by the genuine interest and unadulterated openness of this very traditional looking rabbi. Their enthusiasm over this encounter was remarkable.

Shortly afterwards, I was invited, in return, to speak about Meled and its students to a group of twelfth-graders at Rav Steinsaltz’ Mekor Haim High School in Gush Etzion. At that meeting, I showed them a short video that Meled’s upcoming graduates had prepared about themselves. The first response I received from these students was more than disarming: “At Meled, kids really speak the truth!”

Just a few months later, when Rav Steinsaltz and I met again to share our insights, he was so delighted to hear how eager Meled’s students were that he visited them again. When I shared my observation that the only difference between both school populations was their “livush,” their external appearances, he fully understood. 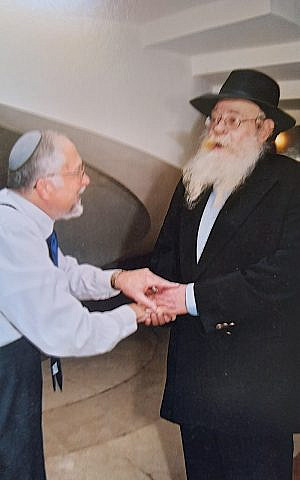 Due to the bond that had developed between us, Rav Steinsaltz proceeded to offer vital support by his network to many of the professionals at Meled, ranging from financial assessment, consultation and temporary aid, along with availing the school of special consideration in order that Meled’s supporters abroad could benefit from tax-deductible status. Over many years, I had the privilege of periodically meeting with Rav Steinsaltz to confer with him on developments at our school and the progress of its students, for whom he cared no less than for any others. After his stroke, in 2016, I was privileged to meet with him on one more occasion…and so fully appreciated his wisdom — without need for the spoken word.

More recently, his written comments on my behalf have moved me beyond any expectations. In response to my request for his approval of my book on Meled that was being published in 2018, Rav Steinsaltz wrote a deeply heartwarming approbation. Some of his words reflect directly on his very being: “All this is the outcome not of administrative success but rather a unique combination of understanding and love.”

May your memory, dear Rav Steinsaltz, forever be a source of blessing.

About the Author
Dr. Menachem Gottesman founded the Mercaz L’Mida Dati (Meled) high school in Jerusalem and was the school’s first principal. He recently published a book, together with his wife, titled: Not At Risk - Education as a Work of Heart (by an imprint of Koren Publishers), which will also be published in Hebrew (by Yediot Sefarim).
Related Topics
Related Posts
Comments