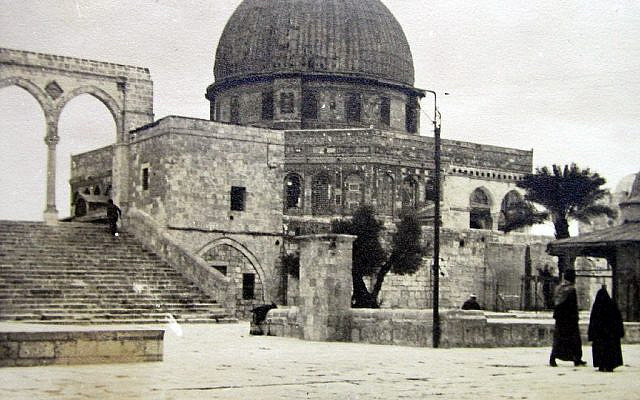 There are two words which refer to the accumulation of holiness on a spatial level: Mishkan and Mikdash. Although the Talmud (Eruvin 2a) admits that these two words can sometimes be used almost interchangeably, they are not truly synonymous. They actually refer to two specific types of holy places, and other usages are simply borrowed meanings. The word Mishkan, commonly translated as “Tabernacle”, generally refers to the temporary, portable Temple that the Jews would erect and disassemble as they travelled through the wilderness. Its root is associated with the words le-shaken and shechina, which refer to the “dwelling” of G-d’s Holy Presence. The term Mikdash or Bet ha-Mikdash, usually translated as “the Holy Temple”, is a reference to the permanent Temples built in Jerusalem upon Mount Moriah.

The Mishkan remained mobile for the forty years that the Jews traversed the desert, and then stood stationary at Gilgal for the first fourteen years that the Jews settled in the Holy Land (while they conquered and divided the Land). Afterwards, the Mishkan was transferred to the city of Shiloh where it stood for three-hundred and sixty-nine years. When the Phillistines destroyed the Mishkan at Shiloh, it was relocated to Nov and then Givon, for a total of fifty-seven years. By that time, the Davidic dynasty had already begun its reign, and King Solomon then built the First Temple in Jerusalem. The Babylonians destroyed the First Temple about 410 years after its destruction, and sent the Jewish nation into a seventy-year exile in Babylon. Upon returning from exile, the Jewish People came to Jerusalem and built the Second Temple under Persian rule. That Temple also lasted some four centuries until it was destroyed by the Roman legionaries in the year 69 CE.

So what is the difference between a Mikdash and Mishkan? In the Mishkan, the Holy of Holies (the chamber that housed the Ark of the Covenant) was marked off with a special curtain. In the First Temple it was marked off with a wall (although, in the Second Temple it was demarcated with two curtains). Similarly, the Mishkan was covered with ten cloth curtains, while the Mikdash had a real roof. The Mishkan used cloth and curtains whereas the Mikdash used more concrete materials, because, by its very nature, the Mishkan was merely temporary, while the Mikdash was meant to be permanent. The dimensions of the Mikdash were obviously greater than those of the Mishkan precisely because the latter was meant to be a permanent structure, not a movable, temporary one.

Another major difference between the Mishkan-era and Mikdash-era was the halachic permissibility of private altars. That is, when the central place of worship was the Mishkan, then halacha allowed for private altars for the offering of certain types of sacrifices (except for the forty years in the desert and the three-and-a-half centuries that the Mishkan stood at Shiloh). However, once the Mikdash was built all private altars became permanently forbidden.

The Talmud (Yoma 9a-9b) reveals the reasons for the tragedies of the destruction of the Mishkan at Shiloh and the two Temples in Jerusalem. The Mishkan at Shiloh was destroyed as punishment for the desecration of holy foodstuffs and for intimacy impropriety; the First Temple in Jerusalem was destroyed because of the three cardinal sins (idolatry, intimacy impropriety, and murder); and the Second Temple was destroyed because of baseless hatred amongst fellow Jews. The destruction of the two Batei Mikdash is mourned yearly on Tisha B’Av, but in some ways the destruction of Mishkan Shiloh is an equally sad catastrophe.

Towards the end of his life Moshe tells the assembled Jews, “For you have not yet come to the resting place or to the inheritance that the L-rd, your G-d, gives you” (Deut. 12:9). The Talmud (Zevachim 119a) expounds this verse as a reference to the two stages of Temple-building: “the resting place” refers to the Mishkan at Shiloh, while “the inheritance” refers to the Temple in Jerusalem. Rabbi Avraham Wittenstein (of Yeshivat Mir in Jerusalem) explains that the Mishkan-paradigm had an advantage because it reflected the continuous manifestation of G-d’s presence from the time of His revelation at Mount Sinai. When the Phillistines destroyed the Mishkan at Shiloh they caused a type of disconnection from Sinai, so that when the Mishkan would later be reconstructed (at Nov and Givon) and the Mikdash would eventually be built, the Holy Presence there would not be the direct continuation of the Divine revelation at Sinai. Instead, it would represent a new sort of revelation which could only be achieved through the hard work of the Prophet Samuel and King David.