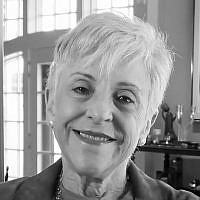 The Blogs
Lynn Schusterman
Apply for a Blog
Please note that the posts on The Blogs are contributed by third parties. The opinions, facts and any media content in them are presented solely by the authors, and neither The Times of Israel nor its partners assume any responsibility for them. Please contact us in case of abuse. In case of abuse,
Report this post.

Last week, I joined nearly 5,000 people from across Israel and around the world to participate in Jerusalem’s 10th Annual March for Pride and Tolerance. In the decade since Jerusalem Open House initiated the march, it has grown into the city’s largest human rights demonstration, bringing out a sea of diverse and passionate faces from across the age, race, religious, political, gender and sexual spectrum.

Each face tells a different story of a moment when we, or a loved one, learned firsthand what it felt like to be excluded, bullied or far worse—not for what we had done but simply for who we were. Each story reminds us of the urgent need to take a stand against hatred and intolerance.

And so, together we marched, from Independence Park to Liberty Bell Park, past the Great Synagogue, on the eve of Tu B’Av—the Jewish Valentine’s Day.

Our return to the march’s original route—where, in 2002, several demonstrators were attacked and seriously injured—signified that our call for love, tolerance and equality could not be silenced. We had come to pray with our feet, as Rabbi Abraham Joshua Heschel said when he marched arm-in-arm with Dr. Martin Luther King, Jr.

We had come to reclaim Jerusalem as a modern, open, vibrant capital belonging to us all—and, in the words of Dr. King, to insist on the “fierce urgency of now.”

As someone who devotes much time and philanthropy to strengthening Jerusalem, I can feel the change that is starting to happen in hubs and pockets around the city, with a new generation leading the charge. Indeed, a fertile arts and culture scene, supported by world-renowned institutions and organizations like the Israel Museum and the Jerusalem Season of Culture, is exposing people to a different side of Jerusalem. The city is literally abuzz with activity, and everywhere you go, people speak with renewed optimism and pride in Jerusalem that was unimaginable just a few years ago.

What’s more, the young people of this city are taking an active role in promoting and advancing equality and dialogue between all sectors of Israeli and Jewish society. Some of them I know well as members of the ROI Community or as part of the Schusterman Foundation-Israel’s broader efforts to revitalize Jerusalem. They tell me that they and their peers are no longer willing to allow a vocal and intolerant minority to speak on their behalf. Among them are Jerusalem Open House’s Elinor Sidi, Bat Kol’s Talya Lev, Mikveh Bar owner Eyal Levit and activist Margot Madeson-Stern, who have become leaders in the LGBTQ community.

Despite our progress, we have an uphill road to climb. Jerusalem—in all of its richness and complexity—faces significant challenges, including the fact that young people are still fleeing the city in record numbers and taking with them a more open and progressive agenda. This exodus is only exacerbated by an entrenched status quo that requires too many people to fight for legitimacy and pride of place in Jerusalem—a harsh reality underscored just days before the Pride march when a man swung a baseball bat at its organizers in a Jerusalem café.

Indeed, the moment is ripe to demand that the leadership of this city prioritize tolerance and diversity as essential to strengthening Jerusalem within Israel, across the Diaspora and on the world stage. Jerusalem can be a model community where Jews come together to focus not on the question of who is a Jew but rather on what we can do as Jews to improve our global community and the world around us. Jerusalem can stand as a symbol of belonging across the Jewish world.

Exactly 35 years ago, I first walked the streets and ancient byways of Jerusalem, discovering how antiquity intersected, and at times collided, with modernity. Far from my roots in Oklahoma, I was awakened to a new feeling of belonging to the Jewish people. Every Jew should have the opportunity to experience that feeling of connectedness to each other and to Israel.

Toward that end, we must rededicate ourselves to building a strong, diverse and global Jewish community. One in which we welcome all who look to Judaism as their path to personal meaning. One in which Israel fulfills its calling as a light unto the nations. One in which Jerusalem stands strong and proud as its open, vibrant capital.

So, too, will it require our collective efforts to ensure that the enduring beauty of the eternal city is rooted in a richness, diversity and tolerance for future generations to embrace and enjoy.