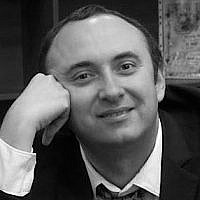 The Blogs
Alex Kagan
Apply for a Blog
Advertisement
Please note that the posts on The Blogs are contributed by third parties. The opinions, facts and any media content in them are presented solely by the authors, and neither The Times of Israel nor its partners assume any responsibility for them. Please contact us in case of abuse. In case of abuse,
Report this post.

Many of today’s North American Jews can trace their family roots to the vast expanse in between Vitebsk, Belarus, and Khabarovsk, Russia. Today, there are more than 40 Reform Jewish communities in this region, and that number is growing.

After the fall of Communism in Eastern Europe in 1989, the Reform Jewish community began to established deep roots in this part of the world. A quarter of a century later, Judaism is flourishing in Russia, Belarus, Ukraine, and the Baltic States. Today, more than 1,000 youth attend Jewish summer camps in the Former Soviet Union (FSU), and more than 50 community workers have been trained to assist rabbis to expand Jewish community programs, services, and educational offerings. Buildings in Moscow, St. Petersburg, Minsk, and Kiev have become major Jewish cultural centers, serving as strong bases for Jewish activities across the region.

Still, despite these successes, best estimates indicate that there could be up to 1,000,000 “lost” Jews in this region whose grandparents were Jewish but today have no relationship to today’s Jewish community – and that many of them would be open to the modern pluralistic approach of Progressive Judaism.  And yet, only six Russian-speaking rabbis serve Russia, Ukraine, and Belarus – a number that is woefully inadequate.

Each of these rabbis, graduates of the Leo Baeck College in London and the Hebrew Union College-Jewish Institute of Religion in Jerusalem, serves multiple congregations. They live in the largest centers in the FSU and although they visit other communities in the region throughout the year, they are unable to provide spiritual services to everyone on a regular basis.

As the congregations in the FSU have grown and the members have become more knowledgeable, so has their need for locally trained rabbis. What’s missing is a critical mass of indigenous, Russian-speaking rabbis and professional educators to support the entire Jewish community (not only Reform) across the FSU. But how could this be accomplished?

Enter the new Moscow Rabbinic Leadership Institute (Machon), a high-level academic rabbinic training program geared toward the needs of the next generation of Jews who are seeking to affirm their Jewish identity and commitments within the larger Russian, Ukrainian, and Belarusian societies. While Reform rabbinic seminaries currently exist in the United States, Israel, United Kingdom, Germany and Holland, the new Machon initiative will be the first to serve the FSU directly.

Importantly, the Machon program will be run in partnership with Abraham Geiger College in Potsdam, Germany, and Moscow State University for the Humanities, which will help guarantee quality and ensure a top caliber Jewish education. During studies in Moscow, students will also be required to volunteer in the local Jewish community to get hands-on experience, become familiar with organizational activities, acquire volunteer skills, be responsible for projects, and implement the theoretical knowledge they have acquired. During semester breaks, they will return to their respective communities and will work in them on the same principle.

This Moscow Rabbinic Leadership Institute will enable Reform Judaism to develop and grow in the FSU, one of the largest Jewish communities outside of Israel. Having additional rabbinic leadership in the area will establish Reform Judaism as a strong and vibrant modern religious alternative in the region. This gem of a program will also conceivably introduce many thousands of Jews to their Jewish heritage, history, culture, and religion.

Ultimately, the goal is to train the next generation of Jewish leaders so they can return to and serve their home communities – and it is Reform Judaism’s brand of Judaism, rooted in and focused on democratic and egalitarian values, that is primed to catalyze the next great Jewish renaissance.