It took a couple of heart-breaking photos involving a dead child (one of hundreds of children that drowned, most of them without leaving photos behind) to spur Western journalists and politicians into ‘action’ on the issue of refugees.  ‘Action’ between quote marks, of course: both journalists and politicians are doing everything they can… except, that is, actually trying to solve the problem.  The journos have as usual converted the human tragedy into a huge stream of cheap words, ‘analysing’ it from angles dictated by their own ideological stance; as for the politicians, they are – again as usual – jockeying for positions, trying to look good rather than do good; and in the process making bombastic speeches, to shield themselves from the need to act.

But one word isn’t being heard among the many, many thousands that are being minced on the issue of refugees: the word is ‘return’.

Many of the refugees originate from Syria – there are millions of Syrians that fled war and massacre.  But whether they’re living in overcrowded camps in Turkey and Jordan, have found fragile shelter with relatives in Lebanon or have managed to make it to the borderlands of Europe, nobody seems to make the point that these refugees have – once the war ends – the ‘right of return’ to their homes and lands.  Nobody really expects them to return – ever – to Syria, let alone to homes that, most likely, have long been turned to rubble.  Quite the opposite, in fact: when British Prime Minister David Cameron speaks about admitting 20,000 Syrian refugees to Britain, the plan is to integrate them, not preserve their ‘right of return’.  Nobody demands the ‘right of return’ for the hundreds of thousands of people (ethnic Asians from Uganda, boat people from Vietnam, Turks and Greeks from Cyprus, Muslims from Bosnia and Kossovo, etc., etc.) who have, over the years, found in the UK refuge from war and persecution.  Even the ‘United’ Nation’s High Commissioner for Refugees is concerned about how to keep those who took refuge in Jordan and Lebanon alive and reasonably healthy – not how to ensure that they’ll return to Syria.  Given the sectarian nature of the civil war there – there might soon not be a ‘Syria’ to return to. 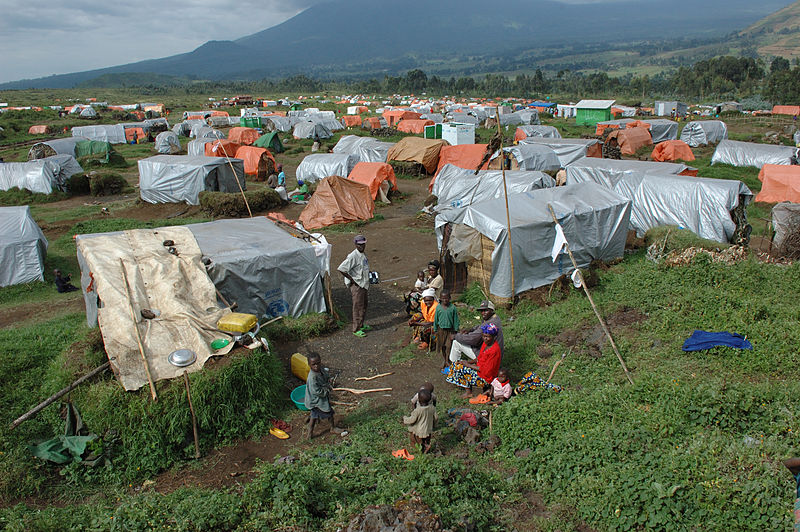 Palestine Solidarity Campaign’s logo displays a map of ‘Palestine’ not alongside, but instead of Israel. {fair use, see https://en.wikipedia.org/wiki/File: Palestine_Solidarity_Campaign_(logo).jpg}

So says, for instance, the Palestine Solidarity Campaign, an organisation whose ‘distinguished’ patrons include: Labour’s upcoming leader Jeremy Corbyn, who drew the ire of the British Jewish community by inadvertently – but repeatedly – associating with strident anti-Semites and Islamic extremists; and Baroness Jenny Tonge, who used to be a Liberal Democrat leader – before being kicked out for anti-Semitic outbursts.  In passing, let me point out that neither Corbyn nor Tonge is a patron of ‘Syria Solidarity Campaign’; nor does such an organisation exist, to the best of my knowledge; after all, to many an advocate of ‘solidarity’, atrocities are of much less concern, if they cannot be blamed on the Jews.

The Palestine Solidarity Campaign, however, very much exists.  It demands that the Jewish state be subjected to a punitive regime similar or harsher to that exerted on North Korea – until such time as it complies with a series of demands.  Among other things that the PSC requires the Jewish state to do is to… cease being the Jewish state by

“Respecting, protecting and promoting the rights of Palestinian refugees to return to their homes and properties…”

That the purpose is indeed to do away with the Jewish state, we learn from yet another Palestine Solidarity patron, Dr. Ghada Karmi:

“The only way to reverse that [the ‘catastrophe’ that occurred to the Palestinians] is on the basis of rights and justice; that is the right of return of the refugees and the dispossessed and the exiles back to their homeland.  If that were to happen we know very well that that would be the end of a Jewish state in our region”. 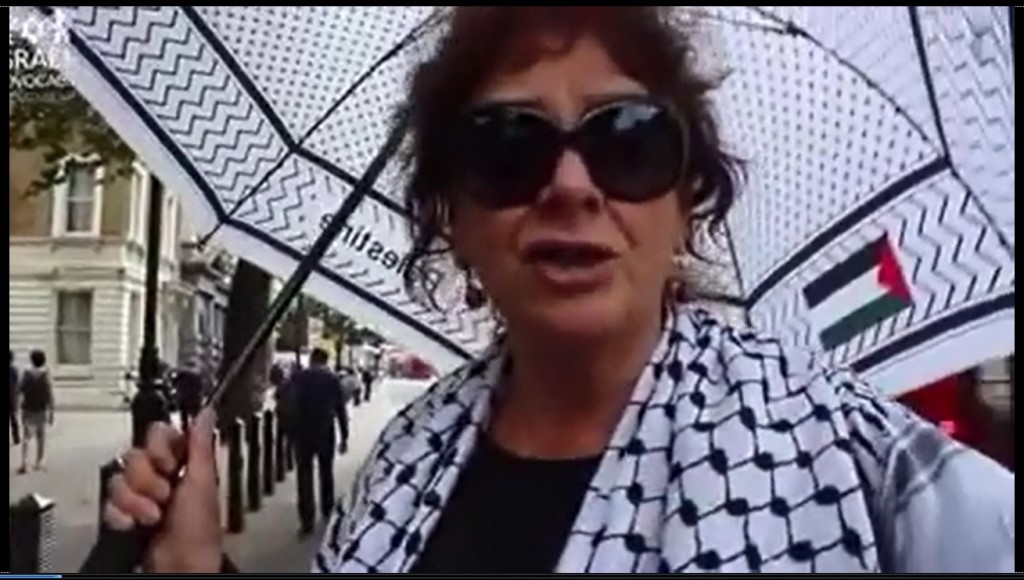 But who are these ‘refugees’ that soooo need to be ‘returned’ to Israel?  No, they are not the millions of people living in tents and makeshift shelters in Turkey and Jordan; nor are they among the hundreds of thousands fleeing conflict in Congo, Eritrea, Somalia, Sudan or Libya; no, ‘Palestine refugees’ are not crossing the Mediterranean Sea in rickety boats, desperate to escape war and destruction.  In fact, the vast majority of ‘Palestine refugees’ have never fled ‘Palestine’ (irrespective of how one chooses to draw the borders of that place); nor did they flee any other place.  Yes, you got it: the vast majority of ‘Palestine refugees’ have not fled from anywhere or anything – in fact they tend to live in the countries where they were born, many of them for 3-4 generations.

A ‘Palestine refugee camp’ in Syria {By Anobel Odisho [CC BY-SA 3.0 (http://creativecommons.org/licenses/by-sa/3.0)], via Wikimedia Commons}
What, then, makes these people, who do not seek and never sought refuge, ‘refugees’??  According to UNRWA, the ‘United’ Nations agency created to provide aid to ‘Palestine refugees’ (all other refugees are under the remit of another agency – the UNHCR), ‘Palestine refugees’ are

“persons whose normal place of residence was Palestine during the period 1 June 1946 to 15 May 1948, and who lost both home and means of livelihood as a result of the 1948 conflict.”

Although the definition doesn’t spell it out, by “the 1948 conflict”, UNRWA means ‘the military attack conducted by the Arab League against the State of Israel’.  If you lost “both home and means of livelihood as a result of” any other 1948 conflict (for instance, as a result of the First Indo-Pakistani War, which raged that same year), then forget it: UNRWA will not recognise you as ‘Palestine refugee’ (or as ANY refugee) and will give you absolutely nada.  And don’t try to take your problems to UNHCR, either: they won’t recognise you as refugee, because they operate under a completely different definition of the term…

Still, even judging by UNRWA’s weird, unheard-of ‘definition’, most people registered as ‘Palestine refugees’ are not… ‘Palestine refugees’; because they never resided in the Mandate of Palestine.  In fact, by applying that definition, one would have to conclude that the number of actual ‘Palestine refugees’ is probably smaller than the number of UNRWA employees dedicated to ‘supporting’ them.  Which is obviously not very good for UNRWA.  Hence the sleight of hand: by disregarding… er… by ‘reinterpreting’ its own definition, UNRWA has decided that, to qualify as a ‘Palestine refugee’ one does not actually need to have normally resided (or even physically resided) in ‘Palestine’ for two years – or even for two seconds.  All one needs is to have an ancestor (in the male line only – females after all don’t count!) who resided in Palestine.  Shazzzzam!!  The convenient sleight of hand has just increased the number of ‘Palestine refugees’ from a few receding tens of thousands to 5 million and growing – and UNRWA can claim that it needs its 30,000 employees to feed them, clothe them, supply them with healthcare and education, etc.  All necessary because, you see, their great-granddads “lost both home and means of livelihood” 67 years ago!

So let’s see what this means.  Imagine your name is Mohammed Abu-Masri and you are a sprightly 2-years-old living in Amman, the Hashemite Kingdom of Jordan.  Your mother’s family has lived in Amman for as long as they can remember, but she’s your mother and females don’t count.  Your father was born in Jordan; his father was born in Jordan, as was his father – your great-grandfather.  But all that doesn’t matter.  Your great-great-grandfather was born in Egypt, but that does not matter either.  Because in the spring of 1946 he crossed the border into the British Mandate of Palestine, where he found work harvesting oranges in a Jewish orchard.  All that does not matter, however: what matters is that in April 1948 great-great-granddaddy fled to Jordan, having heard that the Jews are coming to kill all men, rape all women and eat all babies.  So that, little Mohammed, whether you know it or not (and, let’s face it, at the age of two you probably don’t) you are a ‘Palestine refugee’.  True, you hold Jordanian nationality – as do your father and grandfather – and as did your great-grandfather and great-great-grandfather, before Allah called them to His bosom.  True, by grace of God and His Majesty The King you’ll be issued a Jordanian ID; you’ll even be called to serve in the Jordanian Army; but, by decree of Mighty UNRWA – you’re a ‘Palestine refugee’, and that’s that; we the Taxpayers of the World United Under the Leadership of Comrade Jeremy Corbyn (TWUULCJC for simplicity), will support you, your children and your children’s children’s children forever and ever – amen!  And will endow you with the inalienable right of return to your great-great-grandfather’s home.  In Palestine of course, not Egypt!

But now imagine that you’re someone else: still a sprightly 2-year-old, but your name is Moshe Ben-Meir and you live in the Jewish Quarter in Jerusalem.  Err… in East Jerusalem.  Your father was born in Jerusalem.  Your mother was born in Yemen, but hey – females don’t count!  Your grandfather was born in the Jewish Quarter.  And so were your great-grandfather, and your great-great-grandfather, who made a living teaching Torah to the Quarter’s kids.  But all that doesn’t matter.  What matters is that, in May 1948, your starving great-great-grandfather decided to surrender to the Jordanian troops who were surrounding the Quarter.  When, a couple of years later, he came back from captivity, the Jewish Quarter was off bounds to him: it was officially in Jordan and had become… a UNRWA camp for ‘Palestine refugees’.  Arab Palestine refugees, that is.  But the Ben-Meirs returned there in 1968.  Which makes you, young Moshe Ben-Meir… no, not a ‘Palestine refugee’!!  It makes you an ‘illegal Israeli settler’ occupying Palestinian land; we the Taxpayers of the World United Under the Leadership of Comrade Jeremy Corbyn (TWUULCJC, formerly known as the Palestine Solidarity Campaign), will boycott you, will divest from you and sanction you, your children and your children’s children’s children forever and ever – amen!  And will force you to end the Occupation and restore the Inalienable Rights of the Palestinian People (especially the Right of Return) – or else take your tiny Jewish ass whence you came.  To Russia; or Poland or something!

Hail Comrade Corbyn and his wise policies!  All will be well and good when we return the ‘Palestine refugees’, we integrate all the other, lesser refugees and we put The Jew in his place.  Wherever that may be.