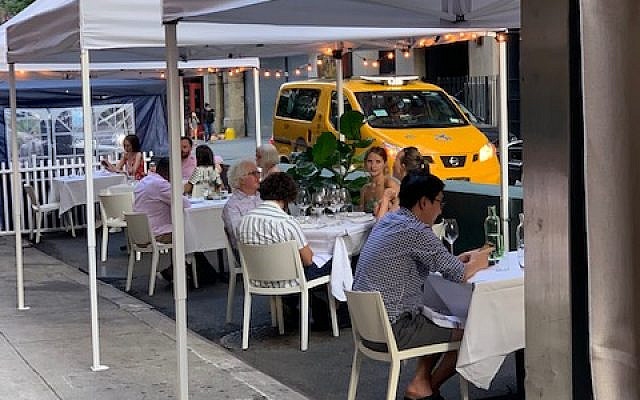 “It is not in heaven…nor is it beyond the sea.”

Today’s Daf Yomi continues two seemingly unrelated discussions from previous days on acquiring knowledge and taking measure of a city’s boundaries.  The two topics come together in concentric circles that overlap in the discussion of pushing limits through learning, study, perseverance, humility, and survival.

The text examines the meaning of the following from Deuteronomy which is debated among the Rabbis: “It is not in heaven…nor is it beyond the sea.” One interpretation says that if the knowledge is not in heaven nor beyond the sea, one would have to reach even further than the heavens and the sea to acquire it. This would require super-human effort and suggests a task that would certainly be beyond the ability of most of us.

Rava has a different interpretation. He says that “it is not in heaven” means that the knowledge is not to be found in someone who thinks “his mind is above the Torah” and “beyond the sea” means that he already believes he has learned everything that is of significance in life. Rabbi Yohanan follows a similar thread when he says that “it is not in heaven”means that “the Torah is not to be found in the haughty” who conduct themselves as if they are living in heaven and do not need to strive to rise higher. And we are told that “beyond the sea” refers to merchants and traders who are so busy traveling and transacting that they do not have time to study Torah.

My preferred interpretation is that the Torah, and by extension, learning, is not above us or beyond us, but right here before us; it is in the place we reside and this city. We do not need to travel to heaven or beyond the sea to gain wisdom and learning. I used to stand at the edge of the ocean when I was a child and wonder where it ended and who and what was at the other end. If I put my hand in a wave would it travel and travel until it touched someone else at the other side.

The discussion over the last few days on measuring city limits reminds me of the New Yorker cover where New York City is seen as the center of the universe, with 10th avenue running down a center of the map and New Jersey anchored by the Hudson River on one side and the Pacific Ocean on the other. Sometimes when you live in this vibrant city – and it will be vibrant again – you forget that its physical space is just an island. Its boundaries cannot be easily measured because the city is more immense than its borders and neighborhoods, and lives in the collective imagination of what it represents to so many people around the world. This is a city of dreams that know no boundaries.

As the days of Sukkot are upon us, it struck me that the city has been preparing for the holiday since early July when it reopened for outdoor dining. During the first few weeks, the dining set-ups were rather ad-hoc with wobbly tables placed on sidewalks and street curbs. But the structures have become more substantial lately, with wind and rain-proof tents built over outdoor dining areas decorated with plantings and in some cases, complete table settings with linen tablecloths. Heaters are being installed in preparation for the colder weather and some restaurants have erected see-through igloos where one can comfortably eat dinner in frigid temperatures.

These dining tents have extended the boundaries of the city in ways I could have never imagined. There is an Italian restaurant in Chelsea that I have been going to for decades. When the restaurant first reopened this summer, it placed a few tables in front of its entrance on the sidewalk. As people kept showing up – perhaps more than expected – the owner accommodated each new party by adding additional tables. The tables, placed six feet apart, pushed the boundaries of the restaurant’s allocated outdoor space until they were literally in the street edging up against traffic. The customers who sat in the street eating pasta as taxis whizzed by seemed content to just be able to go somewhere after so many months of being shut inside. The restaurant owner and his loyal customers signified everything that New York is about: it is a city that keeps pushing the limits in order to survive. And there is a table for every dreamer.