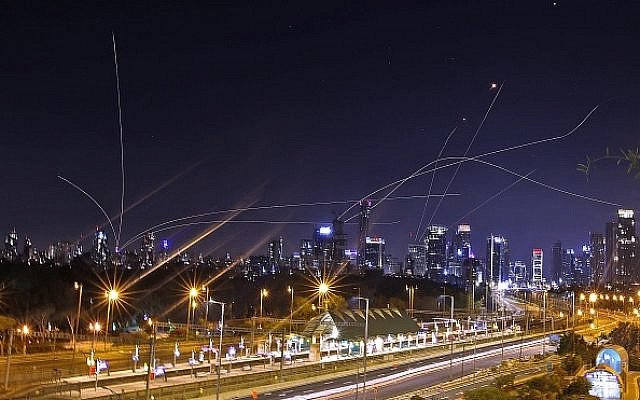 TOPSHOT - Israel's Iron Dome air defence system intercepts rockets above the coastal city of Tel Aviv on May 15, 2021, following their launching from the Gaza Strip controlled by the Palestinian Hamas movement. (Photo by ahmad gharabli / AFP) (Photo by AHMAD GHARABLI/AFP via Getty Images)

The antics this week surrounding the Iron Dome Supplemental Appropriations Act HR 5323 caused anxiety to the Jews in your community.  Just ask around.  The antacid market probably had a good week.

Meant to provide $1 billion in emergency aid to replenish Israel’s depleted supply of defensive missiles in the aftermath of Hamas’ most recent war on Israel’s sovereignty, the bill absorbed a great deal of media attention.

Why?  Why would such an obviously humane act toward our long-standing ally to protect the lives of its citizens from indiscriminate missile attacks cause such angst?

The answer is: it didn’t.

The appropriations bill passed by an overwhelming and bipartisan majority.  A vote of 420 to 9 with two sheepish votes of “present” is not a close call.  In fact, it’s remarkably reminiscent of Congress’ past bipartisan treatment of Israel.

Those who voted against funding to protect Israeli Jews, Muslims, Christians, and all others residing in the State of Israel found themselves in a pitiful minority.  This handful of naysayers for saving lives included the usual suspects in the Squad in addition to a paltry number of human rights posers who lack basic understanding of what human rights entail.

It is worth one moment to read their names.  Know who voted against Israeli lives.

Remember their names, because history will not.

Even allowing them the oxygen to breathe their noxious, hateful fumes of anti-Semitism on the House floor garners them nothing but the ridicule of members of both parties.

Churchill once said, “When the eagles are silent, the parrots begin to jabber.”  We have allowed these parrots enough air time to appear to be a real threat to the preservation of the Jewish State.

They represent no one.

And this vote allowed several eagles to rise amidst the vapors of their wasted, odious breath to champion the cause of all opponents of anti-Semitism.  Listen to the eagles who cry for the cause of NOT killing Jews.  As Churchill also stated, “One always measures friendships by how they show up in bad weather.”

Democrat Ritchie Torres: “A missile defense system (i.e. Iron Dome) defends civilians from missiles.  Hence the name.  Only in a morally inverted universe would this be considered a controversy.”

Republican Chuck Fleischmann (in response to Tlaib’s House Floor anti-Semitic rantings):  “The truth has finally come out on the floor of the House in the United States of America…We heard right now from my colleague across the aisle, a shocking statement—she opposes this because they have a vocal minority in the majority party that is anti-Israel, that is anti-Semitic and as Americans, we can never stand for that.”

Democrat Ted Deutch (also in response to Tlaib): “I cannot allow one of my colleagues to stand on the floor of the House of Representatives and label the Jewish democratic state of Israel an apartheid state.  I reject it. Today, the House of Representatives will overwhelmingly stand with our ally, the State of Israel in replenishing this defensive system. If you believe in human rights, if you believe in saving lives, Israeli lives and Palestinian lives, I say to my colleague who just besmirched our ally, then you will support this legislation…To falsely characterize the state of Israel is consistent with those who, let’s be clear, it’s consistent with those who advocate for the dismantling of the one Jewish state in the world…When there’s no place on the map for one Jewish state, that’s antisemitism.”

Democrat Rosa DeLauro (who introduced the bill): “This bill demonstrates Congress’s commitment to our friend and ally Israel is bipartisan and ironclad. It fulfills our moral imperative to protect the lives of innocent civilians and helps build the foundations for peace. I urge my colleagues to support this bill.”

Republican Kay Granger: “We must ensure Israel has what it needs to defend itself in the face of real and growing threats.  Providing this funding sends an important message to Israel and those who wish them harm that the United States stands with Israel and against terrorists. We must reassure our allies that America will never turn its back on the great State of Israel.”

Democratic House Speaker Nancy Pelosi: “Passage of this bill reflects a great unity in Congress on a bipartisan and bicameral basis for Israel’s security. Assistance to Israel is vital because Israel’s security is imperative for America’s security. I urge a strong bipartisan vote for the security of the people of Israel and for this legislation.”

Listen to these voices.  Augment their volume until they resonate far and above the inflammatory and slanderous rhetoric of the Rashida Tlaibs or the whiny press releases of morally bankrupt politicians jonesing for higher officer like AOC.

I will not even gratify AOC by quoting her childish press release following the vote explaining her crocodile tears at being forced to vote “present” instead of “no” as her apparently baleful heart bid her.  Her laughable misrepresentation of the vote as having torn apart Congress and caused great trauma and angst among congressional ranks is belied by the fact that 420 Congressmen and women apparently had no trouble whatsoever voting against not killing Jews.

She wants you to think there is division.  We have been listening to the parrots chatter, fretting and wondering if she and her ilk are making headway into their party by sowing seeds of doubt regarding our alliance with Israel.

She issued a press release to hoodwink you into thinking there is real division on whether the terrorists of Hamas are misunderstood victims.  There is not.  She wants you to pretend not to see the number 420.  She wants you to continue to buy into the now transparent lie that she and her Squad-mates have gained any real traction within her party.

We need to stop giving this now publicly shamed, anti-Semitic mean-girls clique the power over us to cause worry or fear that they represent the future.

They represent nothing and no one.  They lost their battle for relevance in discussions of Israeli-Palestinian relations with their shameful behavior surrounding this vote.

Consign them to the trash heap of history where their foul beliefs belong.  An eagle should never lose sleep over a parrot’s sentiments.