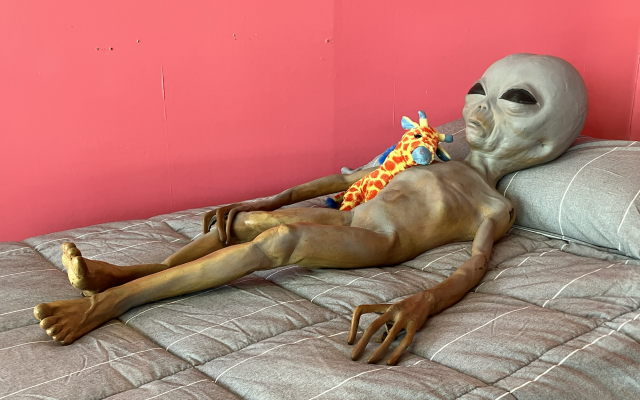 An alien lounges on a bedspread as part of a window-display gimmick at White Mattress fronting Main Street in Roswell, New Mexico. (Photo by Larry Luxner)

ROSWELL, New Mexico — This remote, dusty desert city of 50,000, located east of the White Sands Missile Range and about a three-hour drive southeast of Albuquerque, is known for one thing and one thing only: flying saucers.

Here in Roswell, as I discovered during a week-long visit to New Mexico last month, those saucers are ubiquitous—beginning with one atop the “Welcome to Roswell” sign east of town along U.S. 380. There’s also a UFO-shaped McDonald’s, along with a bug-eyed little green alien relaxing under an umbrella in front of the nearby Western Inn. Another extraterrestrial creature reclines on a bed in the downtown display window of White Mattress Co., not to mention yet another, even more tacky, E.T. proudly holding up the Dunkin Donuts marquee along Main Street.

Yet if it weren’t for an Ashkenazi Jew named Stanton T. Friedman, the world might have long ago forgotten what’s come to be known simply as the “Roswell incident.”

Countless books, documentaries and made-for-TV dramas have recounted how, during the summer of 1947, local rancher W.W. “Mac” Brazen found rubber strips, tin foil, thick paper and other debris on his property and shared the material with Sheriff George Wilcox of Roswell. The sheriff brought the unusual artifacts to the attention of the Roswell Army Air Field, which on July 9, 1947, announced that it had recovered the remains of a “flying disc.”

The outrageous RAAF claim was quickly denounced as erroneous by local military officials who said the debris was actually the wreckage of a crashed weather balloon and related equipment. 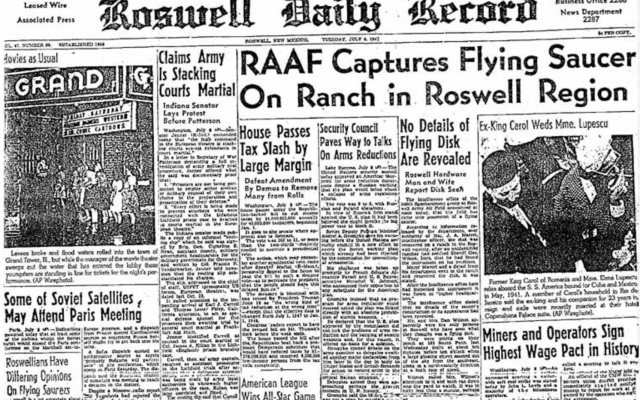 Front page of the Roswell Daily Record from July 9, 1947, details the discovery of a “flying saucer” on W.W. “Max” Brazer’s nearby ranch. (Photo courtesy of International UFO Museum and Research Center)

That would have been the end of it, if not for Friedman, a nuclear physicist and highly regarded “ufologist” who revisited the incident in the 1970s, devoting the rest of his life to proving the existence of flying saucers. In 1987, Friedman—who died three years ago—told the New York Times that federal officials had engaged in a “cosmic Watergate” to cover up the truth.

In 1997, the Air Force—attempting to dispel the rumors—released a 231-page report concluding that alien bodies recovered at the Roswell crash site weren’t aliens at all, but dummies used in parachute tests. It also said that the “spacecraft” that had fallen to Earth on Brazen’s ranch was really an Air Force balloon used in a top-secret program code-named Project Mogul to monitor the atmosphere for evidence of Soviet nuclear tests. 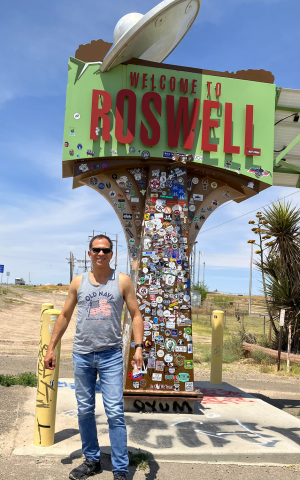 Asked at the time if the new report would finally put the matter to rest, retired Air Force Col. Richard Weaver told NBC’s Today show said: “No, I doubt it. This has become a religion to many people. It’s almost a cult. Certainly, an unbelievable financial opportunity for many folks. So I think this is going to endure.”

This weekend, Roswell marks 75 years since that mysterious 1947 event with an annual Roswell UFO Festival that’s already luring thousands of tourists from all 50 states and beyond.

“This ought to be a really big one since it’s the 75th anniversary, and also because the last two years it was drastically reduced, like everything else, due to the pandemic,” said festival organizer Tom Jennings, who as mayor from 1994 to 1998 launched the event in 1995. 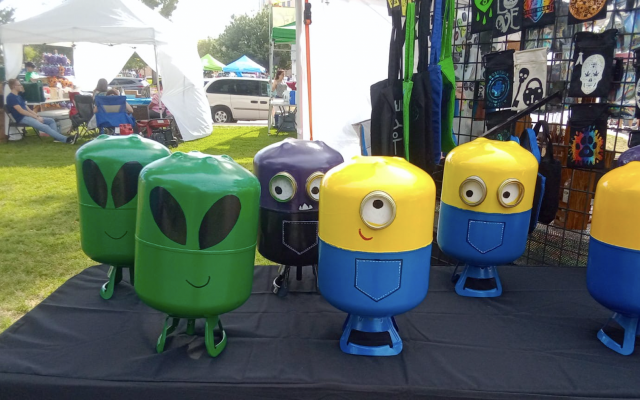 Sidewalk vendors are doing a brisk business selling funnel cakes, alien salt-and-pepper shakers and other trinkets, while tourists crowd the downtown International UFO Museum and Research Center (well worth the $5 admission fee) to learn more about the famous incident.

“These exhibits are designed not to convince anyone to believe one way or another about their subjects,” says a sign at the entrance. “Visitors are encouraged to ask questions.”

With dozens of businesses boarded up and tourism drastically down because of the lingering effects of COVID-19, local merchants don’t care much what really transpired that night in 1947. They’re just grateful for all the desperately needed cash this festival generates. 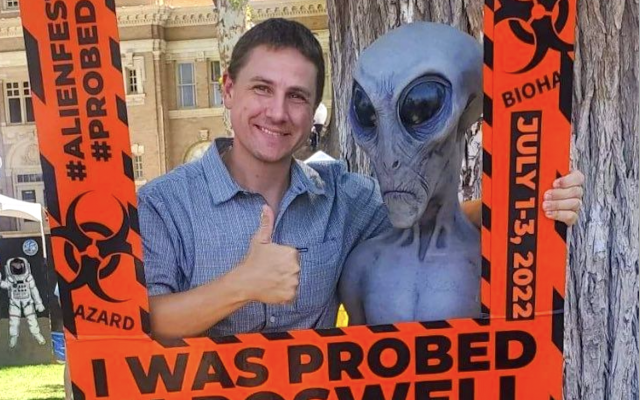 “Roswell didn’t have a tourist industry and one of my friends was telling me about this UFO stuff. So we started the UFO Festival,” said Jennings, who himself isn’t sure what to believe. “I don’t know what happened, but something definitely happened. It’s not unreasonable. We live out in the middle of the desert, and without a lot of bright lights, at night you can see a lot.”

To say Roswell is remote is a vast understatement.

Some 140 miles (225 km) from the nearest interstate highway, the town is also unbearably hot and dry. I quickly learned you don’t go anywhere without Gatorade; it’s even better to stay inside where there’s air-conditioning.

During my visit in early June—it reached 108 F (42 C) one afternoon—I nearly passed out after walking two blocks to pick up cold drinks from a gas station. 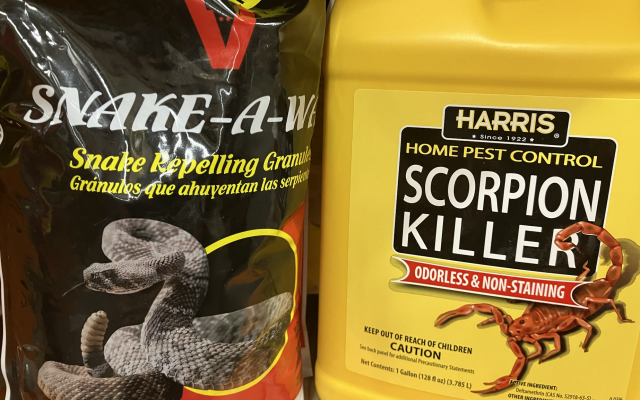 Roswell is also not the place to visit if you don’t love reptiles and other poisonous creatures. At the local Home Depot, two of the biggest-selling items, along with plywood and barbecue grills, are Harris Scorpion Killer and Snake-A-Way pellets.

A 10-minute drive south of town along Montana Avenue brings you to Roswell International Air Center, which boasts a 13,000-foot runway, one of the nation’s longest. The only direct flights from here are to Dallas-Fort Worth and Phoenix, which is why I was shocked to see hundreds of jumbo jets in the distance. As I got closer, I saw the logos of carriers ranging from Ethiopian Airlines to Air New Zealand. I later learned that Roswell serves as a giant aircraft boneyard, with more than 300 jets parked here in the bone-dry desert during the height of the pandemic.

Despite the rather large presence of Hispanics, the town’s economy seems to be dominated by the oilmen and ranchers who have controlled the levers of political power in southeastern New Mexico for decades.

In fact, nearly 70% of Chaves County, where Roswell is located, voted Republican in the 2020 election—a sentiment summed up by the enormous flag that flutters over Captain Joe’s used furniture and home décor shop on West 6th Street: “F**K Joe Biden—Trump Is My President.” 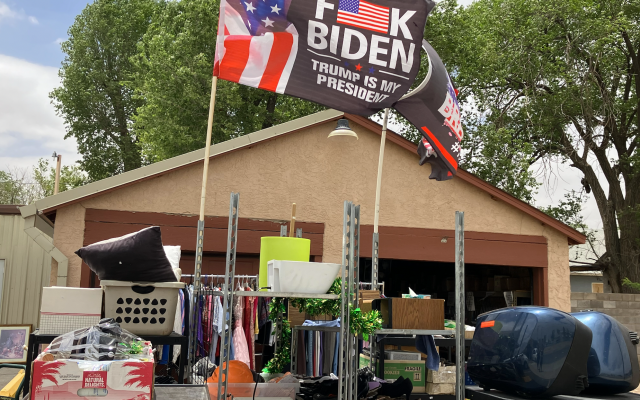 The owner of Captain Joe’s used furniture and home decor outlet in Roswell, New Mexico, makes no secret of his distaste for President Joe Biden. (Photo by Larry Luxner)

Perhaps that shouldn’t be such a surprise in an age where members of Congress last year openly called for a violent insurrection at the Capitol to overturn the results of that election, and where lawmaker (and Trump supporter) Marjorie Taylor Greene of Georgia tweeted that “Jewish space lasers” backed by the Rothschild banking family had sparked wildfires in California.

Conspiracy theories aside, one thing Roswell is not known for is yiddishkeit. There aren’t enough Jews here to make a minyan—let alone support a synagogue—and the few who did live here have mostly died off or moved away. 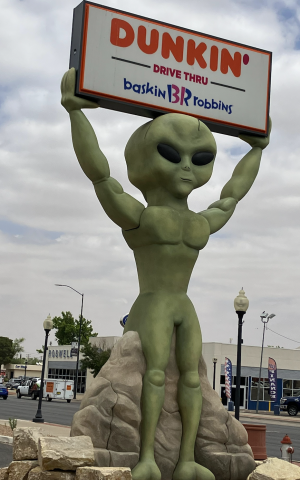 Among them: Leslie Lawner, who relocated to Albuquerque in 2020 after 27 years in Roswell.

“We lived in a house that was built in 1910. It was very affordable,” said Lawner, 69, who along with her husband, Bob, had both worked for Houston-based Enron until the energy giant went belly-up in 2001. Shortly after their arrival in Roswell, they helped establish Sidney Gutierrez Middle School, and she taught at the award-winning charter school for 17 years.

Among other things, Lawner developed a curriculum on Holocaust studies, later training other educators about the Shoah through The Olga Lengyel Institute.

Although they lived only a block away, Lawner and her husband rarely attended services at Roswell’s only synagogue, Congregation B’nai Israel, located at 8th and Washington.

“They didn’t have a rabbi and they only met twice a month, on Fridays,” said Lawner, who moved to Albuquerque mainly to be close to her grandchildren. “There was really nothing we could do for them.” 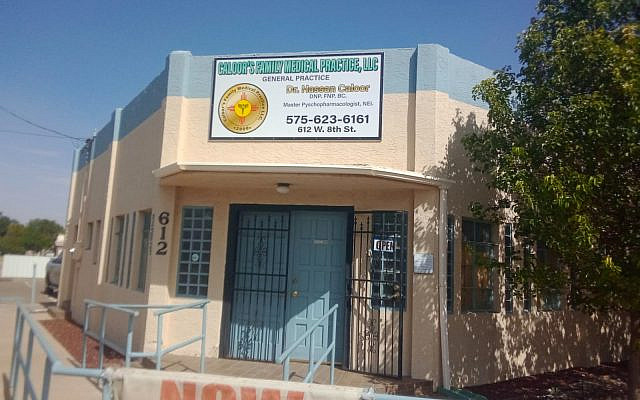 This medical clinic at 8th and Washington is across the street from where B’nai Israel once welcomed Jewish worshippers in Roswell, New Mexico. (Photo by Adrienne Armstrong)

These days, only a handful of Jews remain in Roswell. A Google search for “Roswell” and “Jewish” reveals three synagogues in Roswell, Georgia—a suburb of Atlanta—one of which is a Messianic Jewish church.

“There was never a large community here,” said Cymantha Liakos, a Philadelphia native who wasn’t raised as a Jew but recently took a DNA test and discovered she has Jewish ancestry. Liakos, a former geologist, settled in Roswell with her husband, William, a doctor.

Her 20-year-old son, John, a graduate of the nearby New Mexico Military Institute, just returned from Israel as the first Roswell native (and quite possibly the last) ever to go on Birthright.

Today, the corner structure that had housed B’nai Israel since its establishment in the 1940s is a medical clinic. 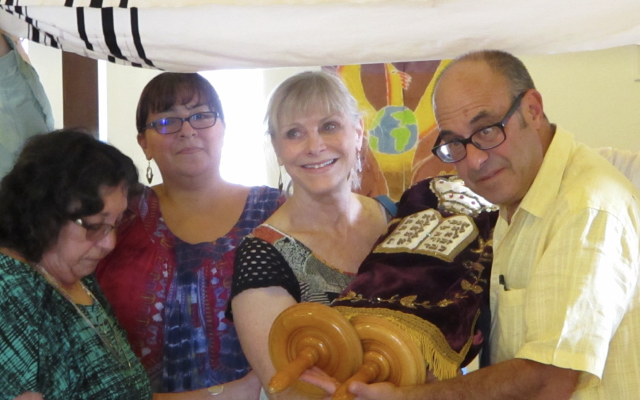 Roswell residents Carolyn and Richard Sidd (at right) along with members of the Karnowsky family help dedicate the Roswell Torah during an Oct. 1, 2018, ceremony at Congregation Nahalat Shalom in Albuquerque, New Mexico. (Photo courtesy of Robin Berman)

“The building was deteriorating and there was no one within the group who knew how to keep it up,” said Judy Stubbs, B’nai Israel’s former treasurer. “Since there was so few of us left, we decided it was in our best interests to sell it.”

The community’s Torah, meanwhile, has found a new home at Congregation Nahalat Shalom in Albuquerque, New Mexico’s largest city and home to many of the state’s estimated 25,000 Jews. In 2018, Roswell’s dwindling Jewish community agreed to “indefinitely loan” Nahalat Shalom the sacred scroll, which had been rescued from a small town in Czechoslovakia by the Karnowsky family during World War II. 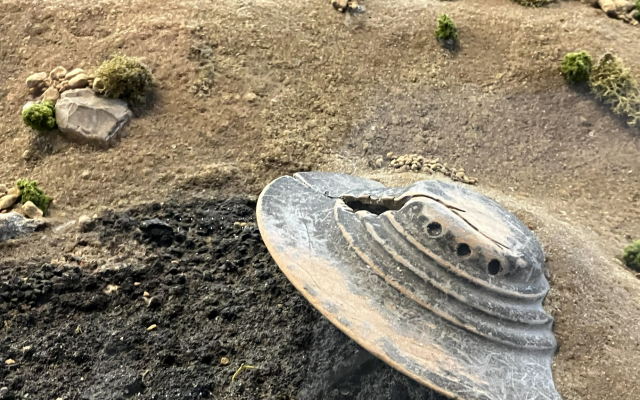 A scale model of the 1947 crash site at Roswell’s International UFO Museum and Research Center. (Photo by Larry Luxner)

So what do the handful of Jews remaining in Roswell think about the 1947 “incident” that made their town famous?

“My husband is from a ranching family with longtime roots in this area, and all of their ranch neighbors strongly believe it is not a hoax,” said Liakos. “There was an incident, and a government cover-up. Both of us are scientists, and we’re not shrugging it off as ridiculous.”

Stubbs, a longtime resident of Roswell who just stepped down after 20 years on the Roswell City Council, agrees.

“People ask me that question all the time,” she said. “A lot of people come here to find out, but no one has the answer. And unless the federal government chooses to open the records, it’s a question that will never be answered.”