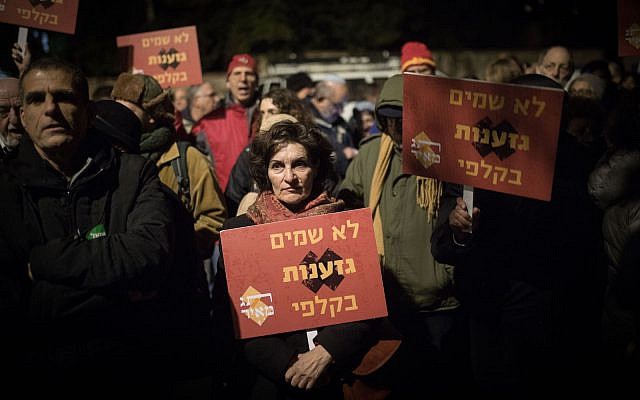 Yesterday, the Supreme Court of  Israel disqualified Michael Ben Ari for running for the Knesset on the Otzma Yehudit (Jewish Power) list, the most extreme racist list to run for the Knesset since Meir Kahane served in the Knesset with his Kach party from 1984 to 1988.  It is only too bad that the Court didn’t disqualify all of these new Kahanists—who seem to be more clever than the old ones in disguising their outright disdain for Arabs, gay people and other minorities in Israel.  It would have been much better if this weird distortion of Judaism in the form of a fanatic political ultra-nationalist party was not allowed to run for the parliament in our county, just as Meir Kahane was not allowed by the government of Israel to run again for the Knesset after 1988, due to his extreme racist views. It would be akin to letting the Ku Klux Klan officially run for office in the USA.

Fortunately there are people who resist these extremist trends in Israel.

About two weeks ago, on Saturday night, March 2, 2019, I attended a rally opposite the home of Prime Minister Netanyahu and his family on Balfour St. in central Jerusalem, with hundreds of other Jerusalemites who came out to protest the cooption of the formerly outlawed Kahanist party into the right-wing political “mainstream” by the prime minister himself, an act that has been condemned widely in Israel and abroad. This new party, called Otzma L’Yisraelis currently led by some of the most outrageous racist extremists in Israeli society, even if one of them has now been disqualified, who must be considered to be beyond the pale ( see my blog post on this subject.)

The demonstration was co-sponsored by Meimad, the political movement led by my friend and religious inspiration, Rabbi Michael Melchior; Oz Veshalom, the Religious Zionist Peace Movement, led by my friend and fellow congregant David Waimann; and the Tag Meir Forum, led by my colleague and friend, Dr. Gadi Gvaryahu, chairperson of the Forum, with whom I have attended (and spoken at) many rallies and solidarity visits in Israel during the last 7 years.

The demonstration opened with a warm welcome by Anton Goodman, a young member of the Executive Committee of Oz Veshalom, to the hundreds of protestors who came out on a cold Saturday night to make their presence felt and make sure that the voices of the true religious and ethical voices of their leaders are heard.  According to Goodman,

This is the beginning of rejuvenating Oz V’shalom, the Religious Zionist Peace Movement. We are getting it up and running again, so that there will be a voice for religious Zionists who believe in peace.-Anton Goodman, Oz Veshalom.

The first speaker was Rabbi Melchior, the leading religious peace activist in Israel for many years, who is chairperson of Meimad. A former minister in Israeli governments in the good ol’ days when there was a peace process, in the early 1990s, in which he was instrumental with his religious pro-peace voice. In recent years, he has become famous around the world for his “Religious Peace Initiative”.

Rabbi Melchior told the hundreds of protesters who had gathered in central Jerusalem for this rally that Otzma Yehudit itself and Habayit Hayehudi and the National Union, which joined forces with it under Netanyahu’s pressure to form the Union of Right-Wing Parties are very dangerous at this time and he explained why:

These political parties are adopting the most impure values from the nations of the world – fascism and racism – and want to stain Judaism.–Rabbi Michael Melchior, Meimad

Instead, he stressed the values of peace, tolerance, mutual understanding and acts of loving kindness, which are the core values of Judaism, but which seem to have been forgotten by the so-called “religious” political parties of Israel.  These are the values which brought hundreds of Jewish voters into the streets to raise their voices for a Judaism of holiness and righteousness, and hopefully will continue to do so during the upcoming weeks of this scary election season in Israel this spring.

Other speakers at the rally included: Rabbi Ehud Bandel, representing Rabbis for Human Rights, Professor Shulamit Magnus, a renowned professor of Jewish History, Rabbanit Devorah Evron, and Aviad Hominer, another member of the Executive Committee of Oz v’shalom.  In addition, uplifting and inspirational music was provided by a wonderful group called Sharim Baginah (“Singing in the Garden”), affiliated with a new pluralistic, rabbinical training program in Israel. In the tradition of protest rallies going back to the sixties– when Peter Paul and Mary, Pete Seeger and Phil Ochs, used to inspire large anti-war demonstrations in America when I was a student — these musicians added additional beautiful, inspirational voices to the event.

At the end of the rally, Tag Meir Forum chairperson Dr. Gadi Gvaryahu gave a powerful speech which left its mark on all the participants who attended. Among other things, he said:

Habayit Hayehudi (“The Jewish Home”, which was formerly the National Religious Party) would never had thought of combining forces with a party that believed in violating the Sabbath publicly, even if it meant gaining 10 more Knesset seats. It wouldn’t include a party that didn’t keep kosher, but they are looking the other way with a party that seeks to violate basic Jewish values, that supports a murderer who killed 29 worshippers inside a mosque, or those who torch and destroy cars, uproot olive trees, desecrate mosques, churches and monasteries, set fire to houses and set fire to children. These is not a few sickly weeds, but a group with an ideology that now is getting a halakhic, public and legal back up, including from Benjamin Netanyahu.–Dr. Gadi Gvaryahu, The Tag Meir Forum

This demonstration was hopefully only the first of many more to come in this extremely fraught election period in Israel, one of the most important elections we have ever had. We are in a very dangerous period now in Israeli history, in which the extreme right religious and political parties are growing in strength and power and threatening to change the liberal nature of Israeli society at its foundations.

The Likud party, which has almost no sane moderate leaders any more,  is comprised mostly of fanatic and sometimes delusionary and inciteful ministers who follow Bibi’s orders obediently and issue daily if not hourly messages about how the main challenging centrist party called Kahol v’Lavan (Blue and White) are a bunch of “leftists” (a code word for “traitors” in right-wing parlance) who would sell Israel down the river on security. In addition, they say that it is illegitimate that they might even cooperate with Israel’s (democratically-elected) Arab members of Knesset. Also, they claim that the leaders of the main competing party know nothing about economic issues. Worst of all, Bibi has made an alliance with the most far-right  parties, which once would have been rejected by Likud moderates like Menahem Begin, Benny Begin, Reuven Rivlin and Dan Meridor, and even Netanyahu himself years ago, when he wasn’t fighting for his political survival in the face of overwhelming evidence of his corruption over many years.

There are still many people in Israel who still care about the Jewish and democratic character of Israel, as was the case with the hundreds of people who showed up to demonstrate against “Kahanism” about two weeks ago, opposite the Prime Minister’s House. And there are also many people in the diaspora who are worried, as we are in Israel, about the growing fascist tendencies of the extreme right in Israel, which now includes most of the Likud. Together we must do everything in our power to prevent Israeli society — especially Israeli politics — from deteriorating into a nightmare scenario of xenophobia and Jewish fundamentalism, which could change Israel beyond recognition, both within Israel and internationally. We have a lot of work to do in the face of these awesome challenges to Israeli democracy.

Rabbi Tarfon would say: The day is short, the work is much, the workers are lazy, the reward is great, and the Master is pressing. He would also say: It is not incumbent upon you to finish the task, but neither are you free to absolve yourself from it. (Ethics of the Fathers, the Mishnah)