The Blogs
David Brent
Apply for a Blog
Advertisement
Please note that the posts on The Blogs are contributed by third parties. The opinions, facts and any media content in them are presented solely by the authors, and neither The Times of Israel nor its partners assume any responsibility for them. Please contact us in case of abuse. In case of abuse,
Report this post.

Having recently moved to Israel from the USA, most of my friends and all of my family are in the states. My friends and family watch the news on TV and are worried for me and for Israel. Their concern for me and my safety and the safety and security of Israel during this stressful time is greatly appreciated. I want to write this piece to answer their questions.

First I want to thank everybody who understands that Israel is on the front lines against evil. This evil is in the form of one of the many political Islamic movements that are trying to kill everyone that does not agree with their thinking. This time, the name of the political Islamic movement that Israel is fighting is called Hamas. Eight years ago Israel was fighting Hezbollah. Now Hezbollah is busy killing Sunni Arabs in Syria. Islamic terrorists are blowing up people across the globe. Still, Israel is a special case. Only in Israel are both sides condemned.

Yesterday there was a big demonstration in Haifa against the current operation in Gaza. Busloads of Arabs were brought into the city center to cry out against the so called inhumane acts of aggression that Israel is conducting against the innocent civilians in Gaza. They want Israel to accept missiles coming into the country since most of them do not kill us. They want us to be grateful that we have bomb shelters to hide in. They want us to not fight back. I understand why Arabs would be upset when other Arabs die from Israeli weapons. It is bad enough when Arabs kill each other, it is much worse when Jews do it.

But what really upsets me is when Jews criticize this operation in Gaza. There were Jews who participated in the demonstration yesterday, waving Palestinian flags. I am taking a Hebrew class at the University of Haifa. One of my classmates, a gentile from Brazil, asked me why Israelis would be waiving a Palestinian flag? Would they really want to live in a Palestinian state? My question is, how can someone from Brazil who has only been in Israel a few weeks understand the situation so much clearer than someone who was raised here?

I think that Jews who can’t see the enemy are the biggest obstacles to peace in the Middle East.

And what is this operation in Gaza all about anyway? It is a war against tunnels. The purpose of the tunnels is to allow terrorists to secretly enter Israeli villages nearby and kill as many Jews as possible. Israel is the first country ever to declare war against tunnels. Not war against a people, we don’t want to kill anybody, and are going to great lengths and sacrificing our best so that we minimize casualties. Not war for land, we don’t want to conquer anything. The full might of the Israeli military is being used to destroy tunnels — tunnels used by terrorists to kill Jews. 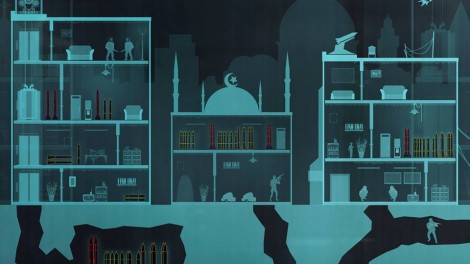 Hamas uses Shuja’iya as a fortress for its weapons. In 13 days, it has fired over 140 rockets from this neighborhood of Gaza. Days ago, we warned Shuja’iya’s residents to evacuate before IDF strikes. Hamas ordered them to remain in the line of fire. (photo credit: IDF)

About the Author
David Brent is a NASA engineer with a master's and bachelor's from the Massachusetts Institute of Technology turned candy entrepreneur. He made aliya in the spring of 2013. David commutes between Israel, where his heart is, and Florida, where his business is.
Comments