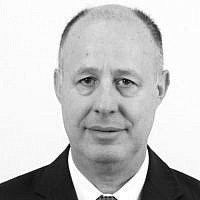 The Blogs
Tzachi Hanegbi
Apply for a Blog
Please note that the posts on The Blogs are contributed by third parties. The opinions, facts and any media content in them are presented solely by the authors, and neither The Times of Israel nor its partners assume any responsibility for them. Please contact us in case of abuse. In case of abuse,
Report this post.

Based on the reactions in the press, by European leaders and across the Muslim world, you would think he had made a broad pronouncement granting Israel dominion over the entire Middle East and declaring the Palestinians devoid of any rights. He did no such thing.

President Trump made a brave decision to keep his word and recognize the simple and indisputable reality that Jerusalem is the capital of the State of Israel. I have served in the Knesset, Israel’s Parliament, since 1988. I go to work every day in Jerusalem. Across the street from the Knesset is the rime Minister’s office and just up the road is the Supreme Court. When foreign heads of state meet with the Prime Minister they do so in Jerusalem, and when Anwar Sadat came to make peace he delivered his historic address in Jerusalem.

President Trump made clear he was taking no position on the final borders or status of Jerusalem or any other issue of contention between Israel and the Palestinians. He stated that he is determined to reach a peaceful resolution to the conflict in a manner acceptable to both Israel and the Palestinians. In his words, “[w]e are not taking a position on any final status issues, including the specific boundaries of the Israeli sovereignty in Jerusalem or the resolution of contested borders. Those questions are up to the parties involved… We want an agreement that is a great deal for the Israelis and a great deal for the Palestinians”.

In response, President Abbas is boycotting Vice President Pence during his visit to Israel and has said the United States has forever abrogated its role as an honest broker. He has called for “days of rage” and endless protests and riots. President Erdogan of Turkey has threatened to cut diplomatic ties with Israel over a purely American decision. In Sweden, a synagogue was firebombed.

There are protests from London to Malaysia. How is it that such a measured announcement, designed to reflect reality, and painstakingly crafted to make clear that the President was not prejudicing the rights of the Palestinians, resulted in such an unhinged response around the world? The President said that the parties themselves should make the decisions that will determine their own future and wants a “great deal for the Palestinians”. Why does being told they have agency over their own future offend the Palestinians or their supporters?

The answer, unfortunately, is that the response has very little to do with what the President actually said and the real world impact of his announcement. The response makes clear that those protesting are not concerned that recognizing Jerusalem as the capital of Israel makes peace harder to attain. They are angry because it may make it easier.

For those who reject the rights of the Jewish people to a state within any borders, any pronouncement that could bring reconciliation to the truth is a threat. Anyone recognizing the fact that the Jewish people have a three thousand year connection to Jerusalem is a threat to those making the absurd claim that Jews are invaders and colonists in our own land.

Those chanting “Khaybar, Khaybar ya yahud” and burning Israeli and American flags are not interested in promoting co-existence. They have no interest in building a better life for the Palestinians, and certainly not for Israelis.

President Trump recognizes the meaning of Jerusalem to the Jewish people. He appreciates that central to our return home was our return to the only capital we have ever known or wanted anywhere in the world. That makes his statement anathema to anti-Semites and anti-Zionists around the world. Make no mistake, most of those protesting are doing so because of their hatred of Jews and Israel, not out of love for the Palestinians or concern for a brighter future.

David Ben Gurion famously said “No city in the world, not even Athens or Rome, ever played as great a role in the life of a nation for so long a time, as Jerusalem has done in the life of the Jewish people”. This statement is still true today.

Much of the world has lambasted President Trump’s recognition that Jerusalem is the capital of Israel. Recognizing reality is in the interest of peace. Continual denial of reality, and resorting to violence anytime somebody says something you’d prefer they hadn’t is a recipe for perpetual conflict.

There remains only one viable path forward to achieving peace. President Abbas claims he is a man of peace. Saying you are a man of peace is easy, actually being one requires courage. If he is serious, he can prove it now by taking two actions that are entirely within his power: 1. End his constant incitement to violence against Jews in Israel and around the world; and 2. Accept Prime Minister Netanyahu’s repeated offers to negotiate anytime, anywhere without preconditions.

The time for empty slogans, and outright rejection of reality has long since passed. If President Abbas truly wants peace and a better future for his people, the time for action is now.

About the Author
Tzachi Hanegbi is Israel's Minister for Regional Cooperation, and a member of the Likud party.
Related Topics
Related Posts
Comments