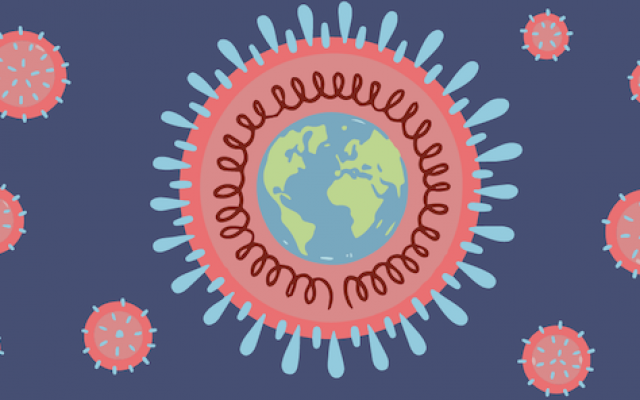 How do we talk about this last year-and-a-half that we have been living through?What is the story that we tell?

But this thanks is not just for one’s material success. It is a thanks that is deeper and embedded in a story. What is that story?

It is none other than the story of the Exodus. It is exactly those verses that make up the bikkurim declaration that serve as the center of the Pesach story in the Haggadah: “Arami oved avi”–We begin, “My father was a wandering Aramean.” The wandering of our forefathers is the point of departure. And then the story continues: We went down to Egypt, we were enslaved, we cried out to God, and God took us out of Egypt with wonders and miracles. The arc of the story is: We were slaves, and then God redeemed us.

That is one way to tell what happened. But there are others. And one of them is found in the bikkurim declaration. For that declaration adds one verse that is dropped in the Pesach Haggadah: “God brought us to this place and gave us this land, a land flowing with milk and honey” (Deut. 26:9). This additional verse not only gives us a different ending to the story, it changes its meaning and the entire narrative. The arc of the story now takes us from displacement and wandering to homeland and a country of belonging. My forefathers wandered, they were strangers in a strange and oppressive land, and now we are free and prosperous, settled in a land given to us by God.

That is the story that the Torah tells. That is the way the farmer expresses a deep thanks to God, for his material success, yes, but it is also a thanks for having a land, being deeply rooted in it, working it and realizing its fruits, the fruit of one’s labor.

When one is living in the Land of Israel, planting and harvesting its produce, the story is about homeland and belonging. When one is living in exile, and one’s homeland is distant, inaccessible, and under the control of foreigners, the story is about freedom and God’s ongoing care for and protection of us. Context and setting exert power. They shape the stories that we tell.

Importantly, neither of these are the actual story itself, the story found in the first half of the Book of Exodus. Each one of these is a re-telling of that original story. When one retells a story, she makes it her own. It is framed and shaped by her values and worldview and by the context in which she finds herself. The story begins and ends where she chooses it to do so, and the lessons to be learned are ones that are relevant to her and to the society in which she lives.

What is the arc and ultimate meaning of that story, and how do we take that message into our lives, are the core questions that frame, whether consciously or unconsciously, the stories that we tell about ourselves and about others. As long as we are not reading another person’s (or God’s) words, every story that we tell is a story that we retell, from what we have read, heard or experienced personally.

Now as well as in the future, we must face the challenge of retelling a story. It is the story of the last few years, the story of COVID-19. Where does it start? Where does it end? Who are the righteous actors? Who are the evil ones? What was its immediate impact and what was its lasting one–on us, and on society at large? Have we learned any lessons, and if so, were they forgotten or were they internalized and acted upon?

Many of us, myself included, had thought that we had already crossed the Jordan and entered the land, that we had returned to a familiar society, to a place of belonging, to a homeland. Now it seems that we are still in the valley of Moab, still on the other side of the Jordan, taking two steps forward and one (or is it two? Or three?) step back. We must ask ourselves: What is the story we are telling now? What will be the story that we will tell once we enter the land? What is the story that we will teach our children? And most importantly, what are the lessons that we have learned, and how does everything that has happened inform how we will live our lives better going forward?