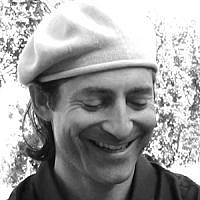 The Blogs
Andrew Tertes
Apply for a Blog
Advertisement
Please note that the posts on The Blogs are contributed by third parties. The opinions, facts and any media content in them are presented solely by the authors, and neither The Times of Israel nor its partners assume any responsibility for them. Please contact us in case of abuse. In case of abuse,
Report this post.

“What will haunt you forever is how Papernick brings you right up to the border of justice and terror, and then makes that border disappear. Open this book carefully. You will close it changed.”  — Dara Horn, author of A Guide for the Perplexed

Years ago at a family gathering, a cousin handed me a copy of Jonathan Papernick’s “The King of the King of Falafel,” a Jerusalem-based story of competition between falafel-mongers that quickly erodes into a turf war of epic proportions. The story left me with questions about culture and conflict in Israel, about whether revenge fulfilled could ever be as gratifying as one might wish it to be.

Since reading that tale, I’ve made my first visit to Israel and eaten falafel in Jerusalem. As the past 10 years in Israel have unfoled, I’ve been learning, little by little, nuances of culture hinted at in that short story. I greatly enjoyed Papernick’s 2010 collection, There is No Other, a grouping of penetrating, tightly-written short stories each dealing with characters at poignant moments of life, wrestling with circumstance, idea, and identity. Papernick conveys humanity so well through his short fiction. I wondered how Papernick would approach a full-length manuscript.

In the first paragraph of recently released The Book of Stone (IBSN 978-1-941493-04-5 Fig Tree Books May 2015), we find Matthew Stone standing outside on the ledge of a Brooklyn apartment, that of Judge Walter Stone, his recently deceased father. Matthew contemplates leaping to his death. Standing there, he wonders how the fatal impact might put an end to his pain and suffering for being a failure, in both his and his father’s eyes.

From the precarious opening to the explosive close, Papernick offers us a harrowing, beautifully written novel.

Matthew’s father was a famous judge, and his grandfather was a famous gangster. Living in the shadow of larger-than-life Judge Walter Stone would be difficult for most people. But for his son, his father’s achievements, integrity, and power left him powerless. Matthew innovates a ritual, which he believes will redeem and set things right with his father. He dons his father’s judge’s gown and reads through many of the books that were, during the judge’s life, more his beloved children than his own son. He engages with the hand-written notes and underlined passages as if they were direct messages and instructions from his father. He believes that his father’s legacy awaits him in these notes, and that all he had to do was decipher them. By doing so, he would prove worthy of his father’s love and approval, and would step fully into his own destiny. He believed that, through these notes, his father was proclaiming the righteousness of forming a Greater Israel as envisioned by Jabotinsky, and the punishment of the enemies of Israel.

As this ritual becomes an obsession, Papernick renders a complex protagonist, one who tends to abuse himself, deliberately as well as unconsciously. He strives for autonomy but is racked with shame, grief, and self-doubt. The reader has to decipher whether Matthew is de-coding his father’s messages correctly or being delusional.

We, the readers, want Matthew to succeed, but we fear from the start that he is doomed to failure. This feeling gives us dual loyalties — we understand the father’s disgust and disdain for his son, but we also desire that Matthew rise above his faults and triumph in his life. This latter desire complicates things as Matthew adopts a violent mission, what he believes is his destiny, culled and explained in code in the margins of his father’s books.

The FBI seeks out Matthew to be its stool pigeon to uncover plans of a suspected terror attack in Brooklyn by a group of Jewish extremists. The suspects do approach Matthew under the guise of offering him a place to say Mourners’ Kaddish for his father and feel nurtured by Jewish brotherhood.

Matthew is faced with competing allegiances: filial, religious, national, and religious. As Papernick leaves the reader to make moral judgments, the ambiguity serves the narrative tension well. Matthew jumps to certain conclusions early on and doesn’t always revise his thinking when he learns contrasting information. As an example and mini-spoiler (jump to the next paragraph if you don’t want to know), we find out that Judge Stone’s outward disowning of his father-the-gangster and his violent history was a façade for public view. We learn of the judge’s secret violent ideological philosophy and actions for the sake of forming a Greater Israel and protecting Jews in all circumstances.

A formidable character in the book is Rabbi Seligman. The rabbi has clearly been deeply involved with Judge Stone. Yet, Papernick deepens ambiguity and emotional complexity by causing the reader to doubt Seligman’s motives of bringing Matthew under his wing. The charismatic Rabbi Seligman plays into the gray areas of Matthews’s naiveté, desire to please, and feelings of impotence by promoting his own agenda as if it were Judge Stone’s. Part of the seduction includes Seligman’s insistence that Matthew join him at an Orthodox Rosh Hashanah service, the Jewish New Year when the Book of Life is open, when Jews pray for God to write each person into the Book of Life for the coming year and thereby avert any negative decree.

During one of the critical moments of the service, the story of the Akeda is recited: God commands Abraham to sacrifice his son, Isaac. And Abraham goes through all necessary preparations to do so, including taking implements, two young servants, and Isaac, and setting out early one morning. In the Biblical text, Isaac speaks to his father.

And he said: Behold the fire and the wood: but where is the lamb for the burnt offering?

And Abraham said, My son, God will provide himself a lamb for a burnt offering.

They went both of them together.

The teacher Nechama Leibowitz writes about this exchange as representing the time that Isaac reaches understanding of his father’s mission: “This time, both of them fully and equally aware of the implications of the situation.” She quotes Rashi about father and son going together, “שווה בלב”, with equal heart.

It is this “equal heartedness” that Matthew strives to achieve with his own father, even after the judge is dead. He busies himself in order to reach this equal heart experience, akin to “being on the same page.” Sometimes, wearing his father’s robe and studying the underlined passages and marginal notes, it appears that Matthew may be making progress in understanding his father. However, the actions Matthew chooses to take based on this understanding are enough to have readers question whether he is delusional.

Considering the binding of Isaac, “Stone imagined Isaac’s permanent anxiety, distrust, and guilt, his feelings of failure and disgrace before his awesome father, bound on the altar beneath the devastating blade. Stone finally understood why the Jews, descended from the patriarch Isaac, were such a neurotic people. They were born from this frightening act of faith, a psychological wrecking ball echoing through the millennia.”

With the patriarch Abraham, it was his love for God that allowed him to agree to sacrifice his own son. For Walter Stone, it is unclear to the reader why he’d forsaken his son. Though Matthew’s past love affair with Fairuza, a young Arab woman, is one of the judge’s official reasons, Papernick shrouds the narrative with enough mystery that the reader may never know how Matthew’s father could truly justify his damning judgment against his son. And worse, we find that the man who Judge Stone saved by rigging a jury, and therefore ruined his career, was an Isaac, a man named Isaac Brilliant. He chose to sacrifice all that was important to him, but not for the sake of his own son.

In contrast, we learn how Judge Stone’s attitudes drove Matthew’s mother Abi away when Matthew was just a boy. We also discover why she’d remained a stranger to Matthew since that time. It is in the newly possible relationship with her, and with his new love interest, Dasi, that Matthew is presented with the possibility of unconditional love. Yet Papernick makes us wonder whether the fulfillment of such love will be more important to Matthew than will be his proving himself worthy of his father’s approval.

The Book of Stone raises adrenaline for its driving action. Its characters come to life with some of the best and most of the worst human traits, leaving us hoping that such a dark vision will not manifest. I’ll close with an example of how the beauty of the language is what sustains the reader with such a harrowing plot. Here, Matthew contemplates breaking out of his isolation and becoming a member of a group of militant Zionists with his destiny in mind:

“[Out] of the corner of his vision, he caught a group of pigeons rising from the roof of a building across the street. They formed a pattern against the sky, undecipherable, shifting and turning and finally breaking up into smaller groups and landing on an adjacent rooftop. It was fascinating how they moved, together and then apart, as if some sort of higher magnetism controlled their movements. How wonderful it would feel to be part of something like a flock of pigeons, to move with such grace and ease, to just know the correct thing to do.”

About the Author
Andrew Tertes is a novelist, podcaster, and coach.
Comments