They clean. They clear tables. They wash dishes; they wash floors. They walk the streets, ride the buses. They are dark-skinned, indistinguishable, and most of them don’t speak our language. They are all around us, but we don’t acknowledge their existence. We see them in our peripheral vision, yet we never see them at all.

Eritrean refugees in Israel, who hardly ever feature in our concerns, take center stage in the novel Waking Lions by Ayelet Gundar Goshen (Little, Brown and Company, February 2017). They make a very strong impact, one that starts late at night on a dark desert highway. Dr. Eitan Green, recently relocated to Beer Sheva with his family, slams into an Eritrean man and leaves him for dead.

The next day there is a knock at Green’s door. It is the victim’s widow. She found the doctor’s wallet and traced him to his comfortable home. Desperately hoping that this woman will not report him to the police, Green offers her money, but apparently, that is not enough. Instead she calls on his medical knowledge to help treat the members of her illegal community, a demand that is impossible to refuse or escape.

Meanwhile Green’s wife Liat, just starting to prove herself as a detective on the Beer Sheva police force, is assigned a hit and run accident on a deserted moonlit road. At face value the case seems simple enough. Her colleagues state that a young Bedouin rammed into the victim and what does it matter anyway? Just an Eritrean migrant. Yet, something compels her to continue her investigation, never imagining how close to home the solution lies. 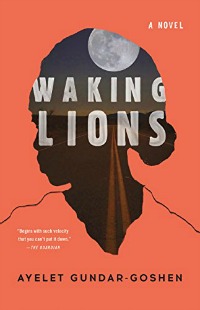 The novel’s most fascinating character is Sirkit, an Eritrean woman who lives a meager, virtually hopeless life cleaning floors in a restaurant. Sirkit displays an enormous strength of character we didn’t expect to encounter. While we find ourselves hating Green for his guilty contemplations, we are attracted to Sirkit and her dreams, desires, and secrets.

Don’t expect Waking Lions to be a fast-paced, suspenseful detective novel. Instead it delves into the minds of the protagonists, into a world of guilt, cover-ups and lies, and a desperate need for survival. These are real people and we can easily imagine the situations they face to be real. Except for the fact that most of us never pay attention to the very real lives of the Eritreans who pass us by on Israel’s streets.

Ayelet Gundar-Goshen is an Israeli author and an award-winning screenwriter. She won the Sapir Prize for her debut novel, One Night, Markovitch. Her second novel Waking Lions is being adapted into a television series.