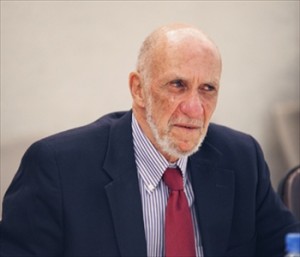 Richard Falk, the infamous 9/11 Truther and author of the New York Times 1979 classic op-ed “Trusting Khomeini,” has not received a moment of our attention since his 6-year term as the UNHRC’s special investigator of “Israel’s violations of the bases and principles of international law” expired, at long last, in June of this year.

Yet the former committee member of Human Rights Watch, expelled by Ken Roth 24 hours after we protested his role at the global NGO, continues to evince a profound bitterness to UN Watch, the only human rights group at the United Nations that dared to expose his toxic mix of pro-Hamas appeasement, anti-Western invective, support for 9/11 conspiracy theorists and demonization of Israel.

Our allies in condemning Falk’s poison included UN Secretary-General Ban Ki-moon, the U.S., the UK, Canada — and the Palestinian Authority, which famously tried to fire him. For a glimpse into Falk’s numerous statements supporting terrorism against America, the West and Israel, click here.

While we stopped watching him after he left the UN, it seems the man is bitter. Here is Falk’s latest tirade against UN Watch, from his essay yesterday on the alleged misuses of anti-Semitism:

I do not claim neutrality on these issues. During the past six years, while serving as UN Special Rapporteur for Occupied Palestine on behalf of the Human Rights Council, I have been the continuous target of a sustained defamation campaign spearheaded by a Zionist-oriented NGO, UN Watch, based in Geneva. I was repeatedly accused of anti-Semitism, and my views on other issues were likewise distorted to create an impression of bizarre judgment. I was called a supporter of terrorism, a 9/11 conspiracy theorist, and the like…

Because of the atmosphere in North America where demonstrating 100%+ support for Israel has become an indispensable ingredient of political credibility, these defamatory attacks were accepted as valid by several public officials who never bothered to check with me or examine my actual views on such controversial topics.

As a result I was attacked by such luminaries as the UN Secretary General, two U.S. ambassadors to the UN (Susan Rice, Samantha Powers), Foreign Minister of Canada, among others, and a favorite target for Fox TV and the Murdock [sic] media empire.

Additionally, efforts were made to have my lectures cancelled at universities in various places around the world (including McGill and McMaster in Canada, AUB in Beirut, ANU, Melbourne, and Sydney in Australia, Norfolk in the UK, and Princeton, University of Texas, University of Iowa and others in the USA) These universities were warned that unless my campus appearance was cancelled, funding would suffer.

On at least one occasion I was informed that a previous offer of a visiting appointment at an overseas university, Kings College London, was reduced from year-to-year to a single year due to my alleged anti-Semitism.

Even my wife was defamed by such Zionist zealots who tried to defeat her candidacy in the UN Human Rights Council in 2014 to become Special Rapporteur for the Right to Food. She was accused of writing inflammatory anti-Israeli tracts in collaboration with me, a complete lie as we had never collaborated on this subject-matter, and it was further alleged that she shared my anti-Semitic views, which is a double lie.

On the writings of his wife Hilal Elver Falk about “Israel’s Water Apartheid,” click here.